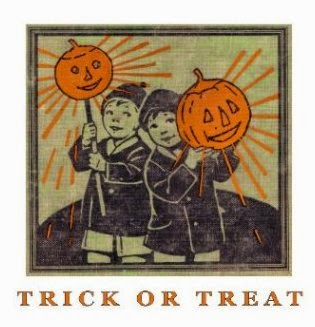 This image is the front cover from an old school reader that I found in a second hand store. The book most likely belonged to a teacher, it is written on and in terrible shape but the graphics are wonderful. I added the text at the bottom of the image. Have fun everyone.
Posted by Len at 8:31:00 PM No comments:

Thanksgiving Will Be Here Soon 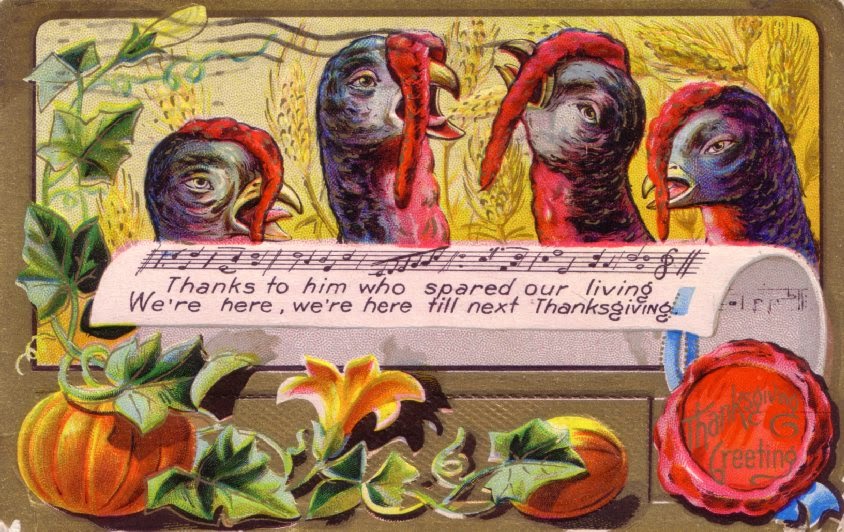 For my American friends reading this blog, Thanksgiving occurs in Canada the second Monday in October. I love Thanksgiving and I thought that I would share two of our family’s favourite recipes. The first recipe to go along with the postcard of the very thankful turkeys is stuffing. This recipe has been in the family for as long as I can remember. Recipes for stuffing are legion and very personal. This is a basic bread stuffing. Bread stuffing evidently originated in the Edwardian era. My family heritage is English and both sides of the family emigrated to Vancouver Island around 1916. I think that this stuffing came from my fathers side of the family but I’m not certain. My grandfather and my dad were butchers and my grandmother was a caterer for a while. The stuffing is good so thank-you from who ever it came from.

3-4 large onions chopped, ground (as in the original recipe), or whizzed in the food processor. Don’t let it get mushy, it should be a little less than ¼ inch in size. One year I over pulsed the onions and the stuffing was not as good.

Mix all of the ingredients together and stuff the bird.

People had complained for years that there was never enough stuffing so we now put stuffing under the skin above the breast meat. It flavours the meat and keeps it moist. I insert my hands under the skin and gently separate it from the meat. Stuffing now goes in the back in the cavity and under the skin. It does take longer to cook but is definitely worth it. I also take as much of the fat of the bird as possible so as not to make the stuffing a grease fest. The stuffing recipe now is a little different in its quantities – 3 loaves of French bread (I like French bread because it is a little saltier and has more crust), 2 bags of onions or 10 t0 14 onions,a teaspoon of salt, ½ a teaspoon of pepper sort of, and 6 eggs. I never measure so these quantities are apt to fluctuate during the stuffing making.

The next recipe is from an Aylmer pumpkin tin label that I still have. My mum made this pumpkin pie when we grew up so she must have got the recipe herself from the tin.

Separate eggs, combining the yolks with the rest of the ingredients. Beat the egg whites to a stiff peak and gently fold them in so as not to break the air pockets in the egg whites. Pour into uncooked pie shells. Place in a preheated oven at 425 degrees for 10 minutes and then reduce to 375 degrees for 35 – 40 minutes. Makes 2 large or 3 small pies.

A side note here, I cook the pies for a bit longer than is usual. I leave them so that the raised areas get a little darker colour but not burnt! This makes the pie a little more firm with the flavours concentrated. Experiment and see how you like your pies, after all they are for you and your families pleasure, have fun.
Posted by Len at 11:56:00 AM No comments: