Christmas is coming! I love Christmas! 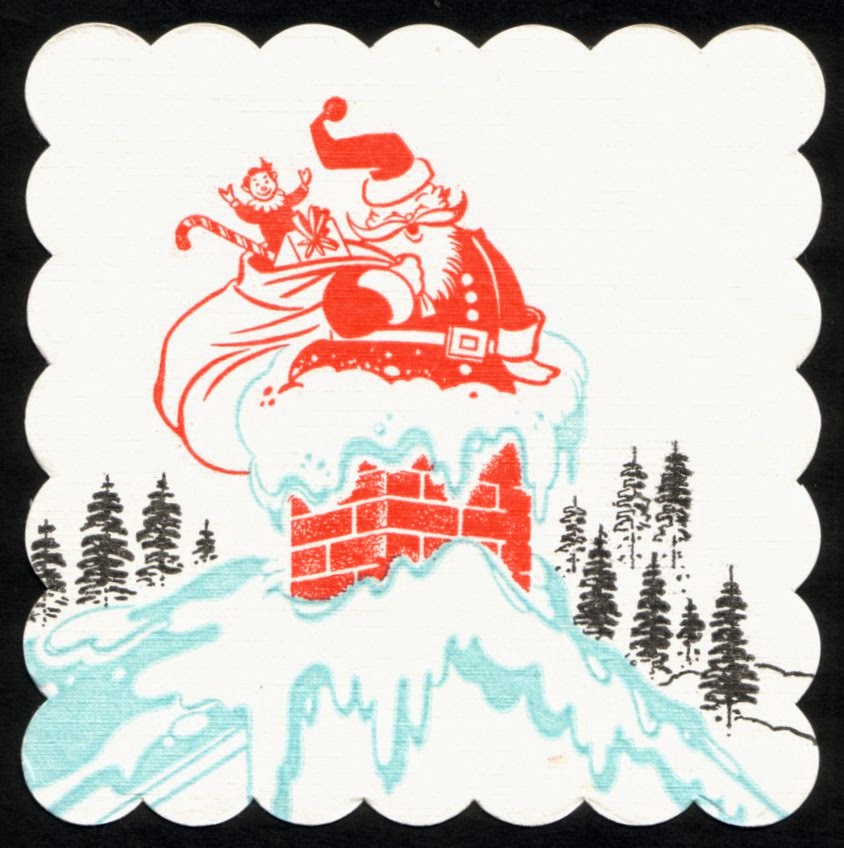 During the Victorian era people complained that Christmas was too commercial. Hasn’t changed much has it? I love the commercialism of it all, but I also realize that that is not what Christmas is about. If it wasn’t for the birth of Jesus there would no Christmas no matter how commercial it has become. Come to think of it Easter would be out of the running as well if Jesus didn’t rise from the grave. Anyway, I love all of the tradition and family customs that go with any holiday. Christmas is one big birthday party with lots and lots of decorations. 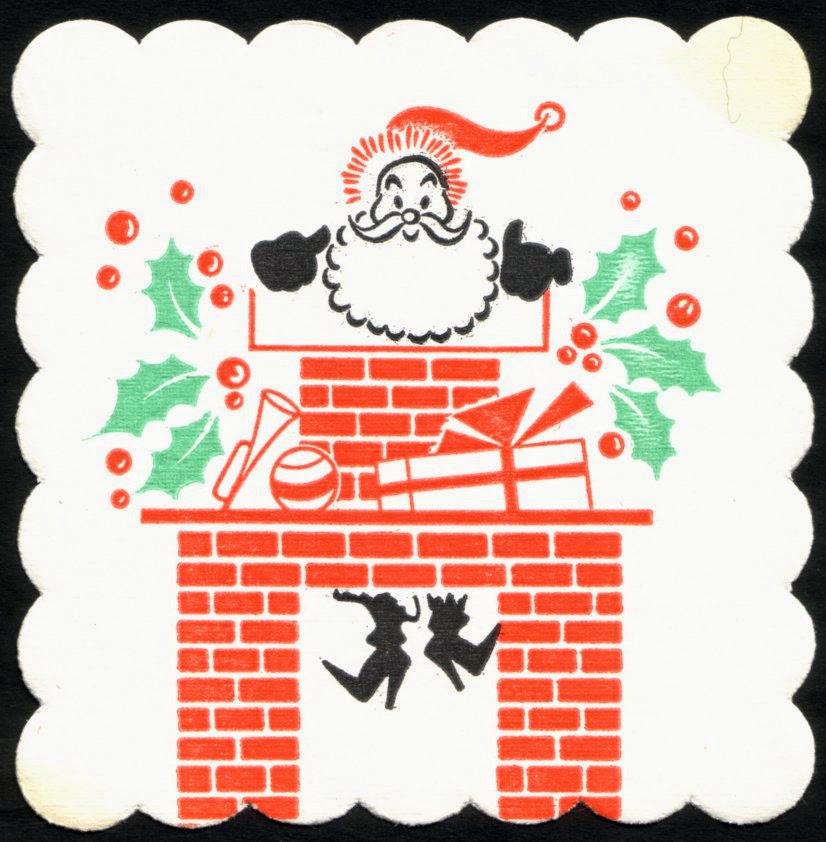 I love the shopping. My wife and I usually take one or two days where we treat the shopping as a date. Our "shopping date" originated when the kids were small and my parents babysat them for the day. This was one of those rare times that we had the whole day together. It was a date by default. We continue our "shopping date" now by choice. Making it a date it takes away the dread of Christmas shopping and turns it into an experience that is fun.

We start around 9:00 A.M. hitting various malls and stores, stopping for a coffee and rest, and then off again to do more shopping. We will stop for lunch, go over lists and then on again. It is tiring, I won’t say it isn’t, but it is fun and I look forward to it each year. One tradition is to stop at a book store (sometimes several) and browse. It is very relaxing to stop for the moment and enjoy some time to slow down and look for something that we might like. By the time we get home around 5:00 or 6:00 P.M. we are exhausted. All of the shopping is not done in these shopping safaris; there are always the jaunts off here and there for various gifts and also the ones that we just remembered that we had forgotten to put on the list. As you know it does all get done.

Enjoy your pre-Christmas shopping, decorating, and parties with friends and family.
Posted by Len at 6:30:00 PM No comments:

Happy Thanksgiving to my American Friends

Happy Thanksgiving to my American friends!

Some of my collection of Thanksgiving related items were featured in the November 2007 issue of "Antiques and Collecting Magazine". Click on each image to get a readable size. 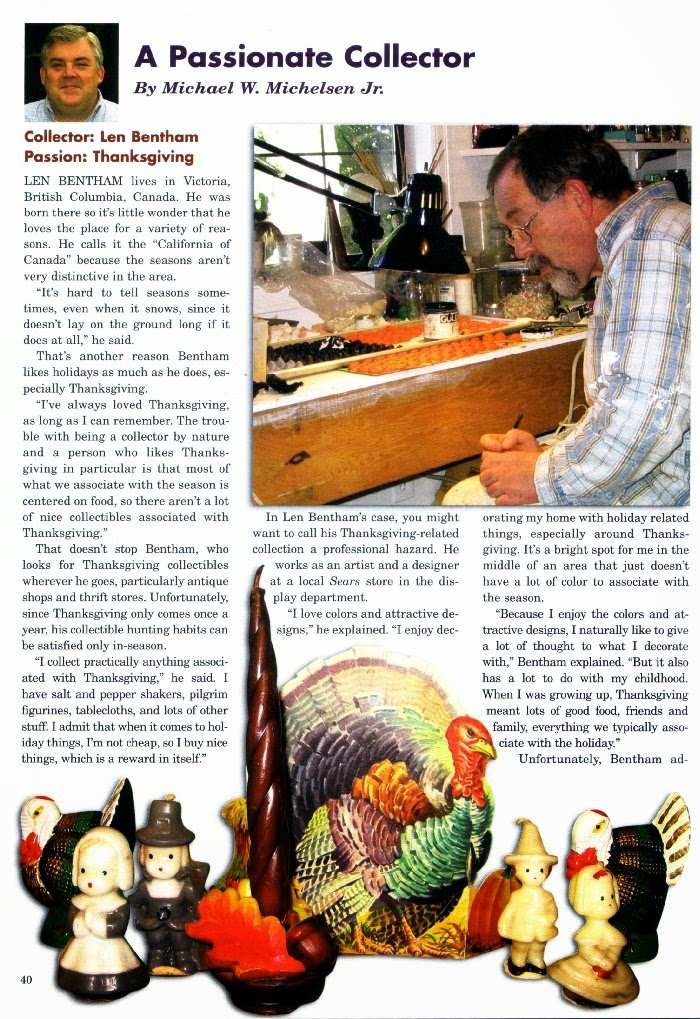 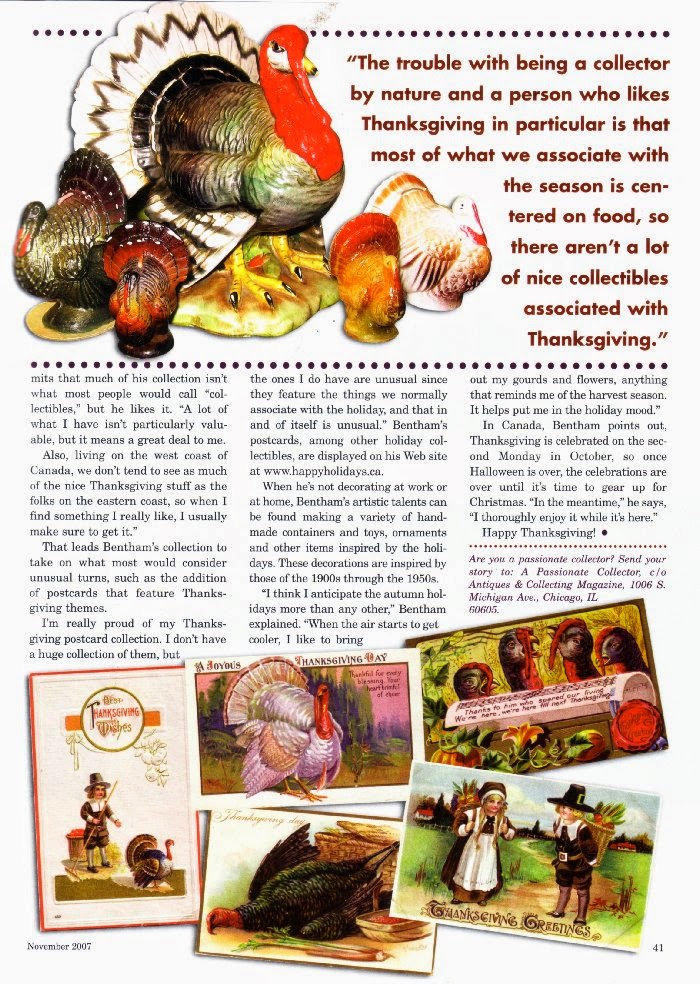 Here are 4 more ornaments for Hallowe’en, better late than never. Besides any time is a good time to buy new holiday decorations! 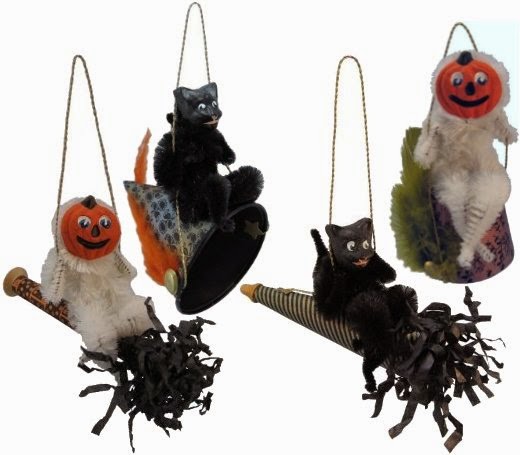 As you have seen in previous postings the design and colour of food has been very interesting to me. Here are three new Hallowe’en ornaments with food playing a very important role. 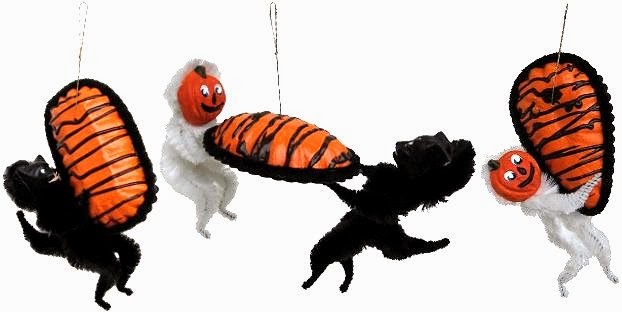 Each of the little iced cakes is a candy box. The hang cord pulls the flap on the back shut.
Posted by Len at 3:28:00 PM No comments:

My intentions for October were to do a number of postings leading up to Hallowe’en but that was not to be. About 6 weeks ago something happened to my back and I have been icing it and popping ibuprofen only if necessary. Between going to the doctor, the chiropractor and getting x-rays (all is fine) I have managed to get a few new items completed. I didn’t even decorate for Hallowe'en this year. Oh well, life goes on and I am doing great.

It has come to my attention recently about a wonderful autumn fair that has had a long and glorious past, known as the "J-O-Lity Fair". Their is also the "J-O-Lity Fair Masked Ball" that is held on the last evening of the fair.

A limited number of souvenirs from the fair have been coming to light. There are also rumours of souvenir masks. Vignettes of a number of the vendors attending this event and participants at the masked ball are surfacing. 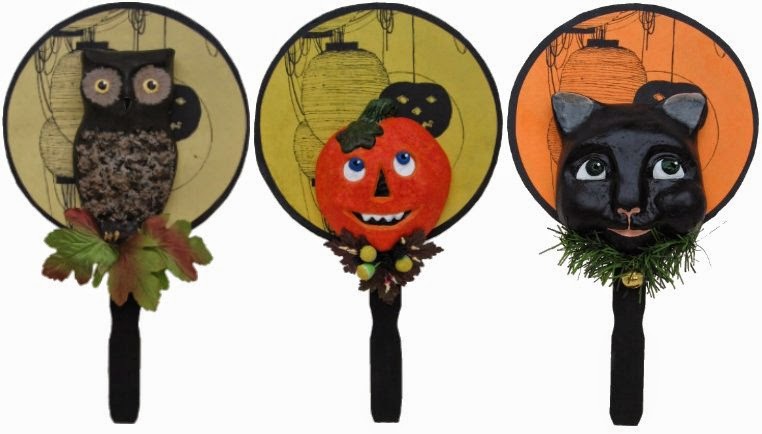 Here are three souvenir Fan/Rattles that have been discovered. Only one of each design is available. Click here to go to Happy Holidays for the information.
Posted by Len at 11:15:00 AM No comments:

I suppose this is a "go green" solution that we have been doing long before "going green" was so important. One or two days after Hallowe’en take those lovely orange globes and cut them up and roast them for use later in the winter. There is a little more prep to it than that but it so worth it. 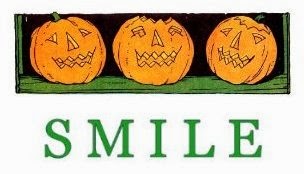 Do not use pumpkins that have been painted or have had vaseline smeared on the cut edges. Do not use scented candles in the pumpkin either as the fragrance will go into the pumpkin flesh. This process is only for the cut and light style of pumpkin.

Cut your Jack-o-Lantern into quarters. Pick out all of the wax left in the pumpkin. Take a large spoon and rescoop out the insides again. Get rid of any of the charred flesh as well. All of the areas that were cut out, eyes, nose, mouth, lid, and lid opening as well as any charred flesh must be cut away. Cut in about ¼ to ½ inch from the edge of the old cut or charred flesh. Slice the pumpkin into strips about 1-2 inches wide. Peel the rind off of the strips. Coarsely cut the pumpkin into cubes. Place in a roasting pan and cook at 400 degrees until soft. Lots of liquid will be released. Press the pumpkin into the juices and keep roasting until most of the liquid is gone. Take out of the oven pressing the pumpkin up on the sides of the pan so as to soften the caramelized and charred areas. So much good flavour is released if you do this step. Let cool. Scape out as much of the pumpkin and charred areas left in the pan as possible. Process in a food processor and then freeze in freezer bags in the amounts you think you will use. We use about a quart at a time. Use the pumpkin puree in pumpkin pie, baking, soups, stews, or risotto.
Posted by Len at 11:38:00 AM No comments: