A Little Tour of My Brain, Part 20 - Fairground Architecture and Midway Rides

Summer is on its way and that means that the county fair, the country fair, the State fair, the Exhibition or just "the fair" will be here soon. 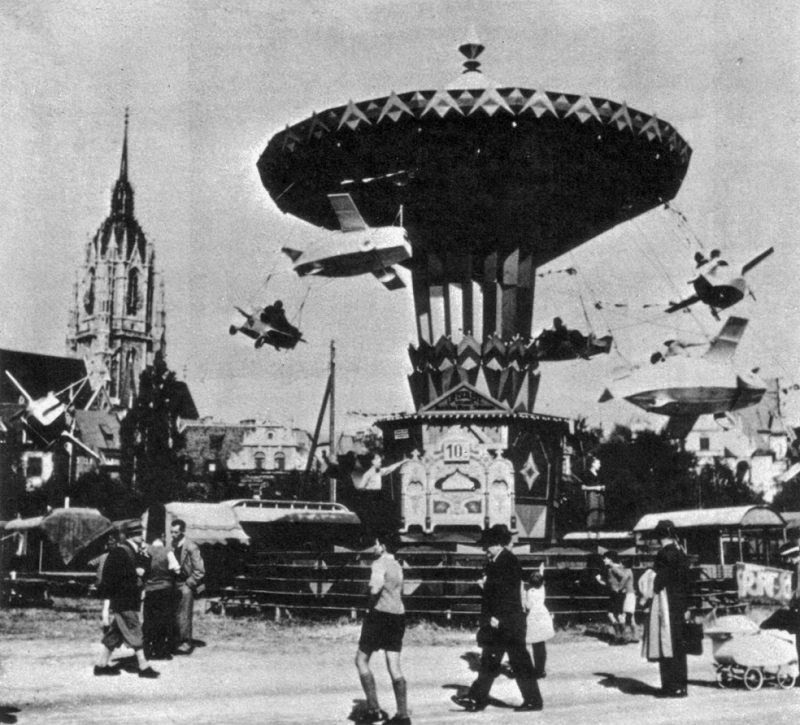 The Art Deco structure of this airplane ride is beautiful. It is interesting to see how the styles of the rides and the decoration change changes over the years. The scene is of a 1950's British fairground. (Image from "Fairground Architecture" by David Braithwaite.) 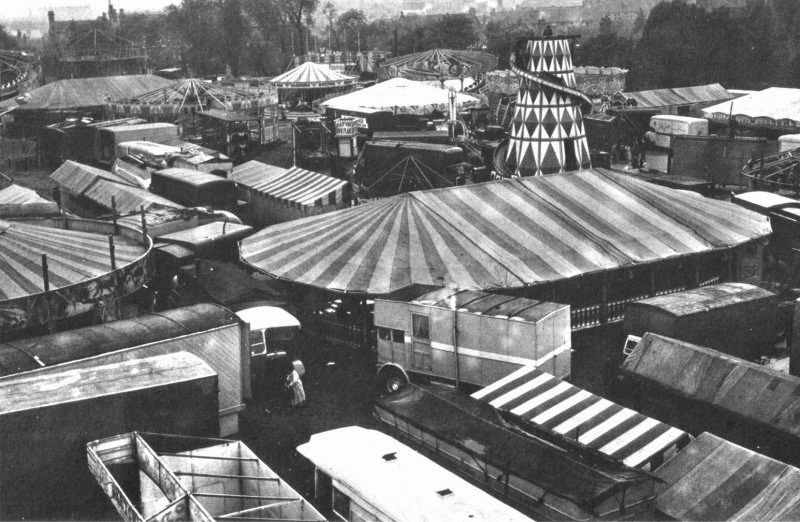 Most people do not see this part of the fairground, setting up the midway. The aerial view is very interesting. The conical structure at the top of the photograph is a British ride called the "Helter Skelter". A staircase inside of the tower takes you to the top and your magic carpet, a coconut fibre mat, is ridden down the outside spiral slide to the bottom. This image is from the Nottingham Goose Fair in the 1950's. (Image from "Fairground Architecture" by David Braithwaite.) 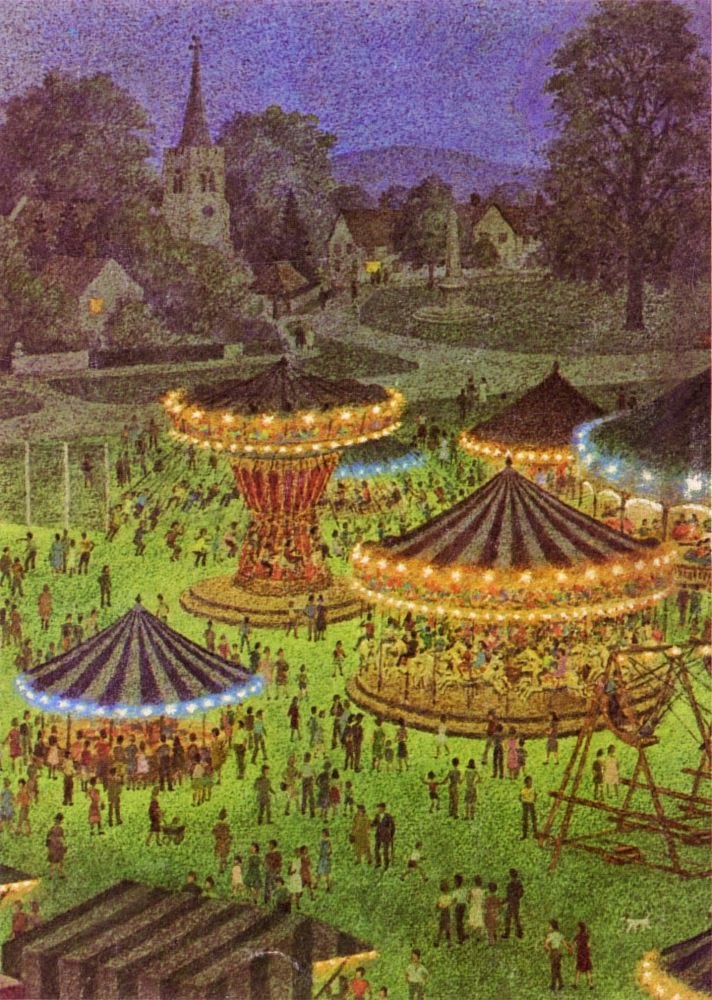 This painting "Fair on the Green" by Ronald Lampitt was on the back of the September 1982 issue of Readers Digest Magazine. 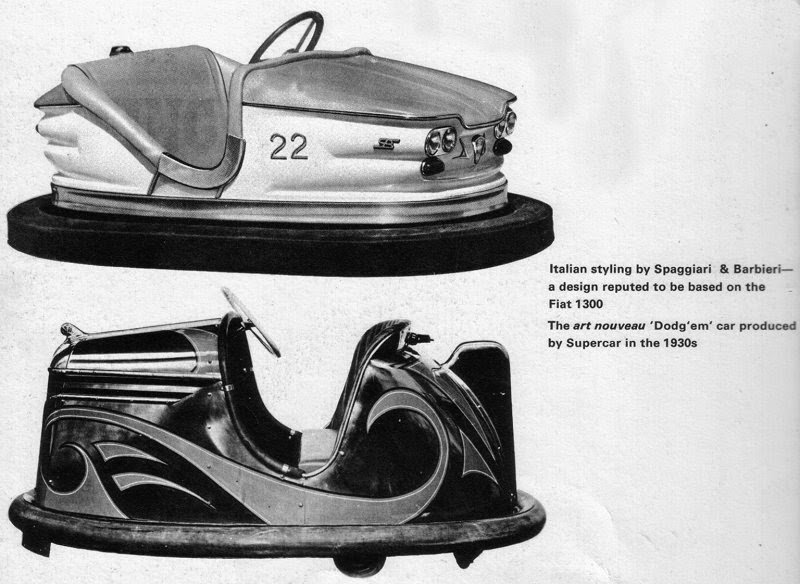 The "Dodg'em" car on the bottom is from the 1930's while the car on the top is based on the Fiat 1300. (Image from "Fairground Architecture" by David Braithwaite.) 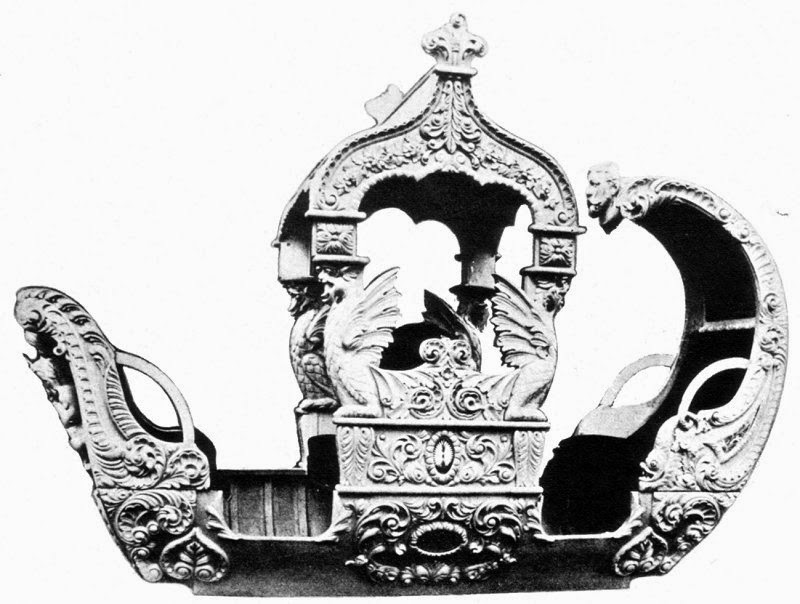 This hand carved gondola is magnificent, can you imagine what the entire ride would have looked like? (Image from "Fairground Architecture" by David Braithwaite.) 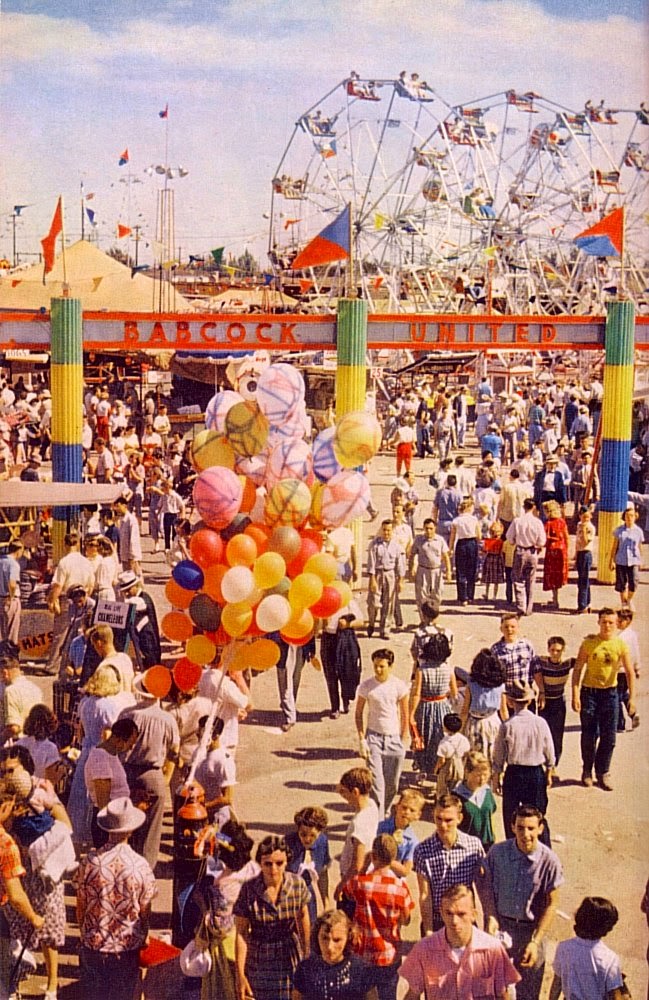 A photograph of the entrance to the midway from the September 1954 issue of National Geographic Magazine. 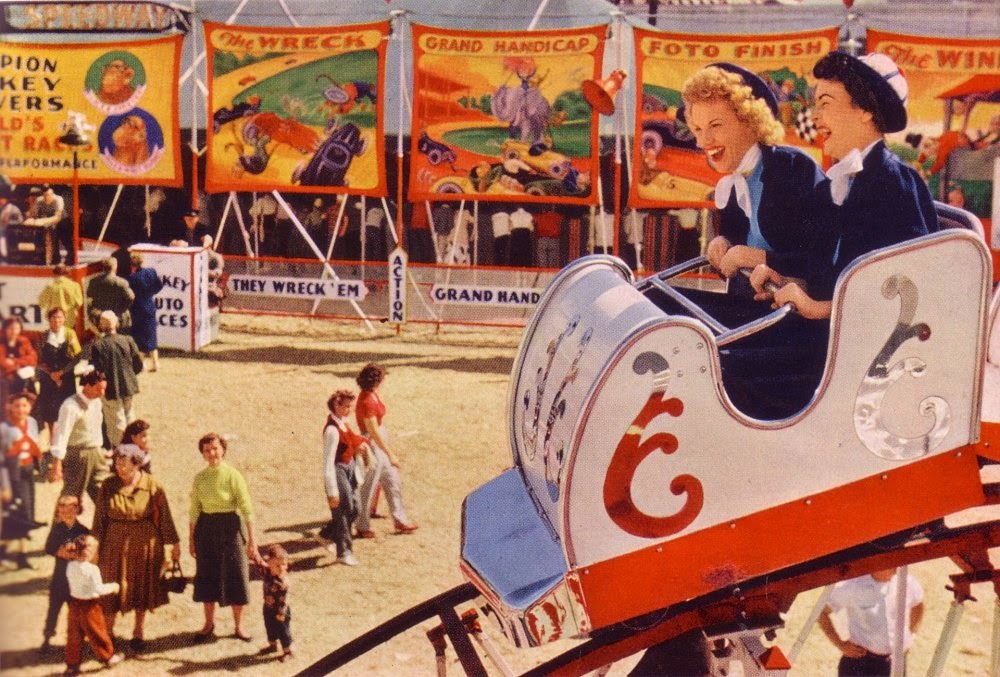 "The Mad Mouse" miniature roller coaster from the same September 1954 issue of National Geographic Magazine. Times and clothes change but the fun of the midway doesn't. 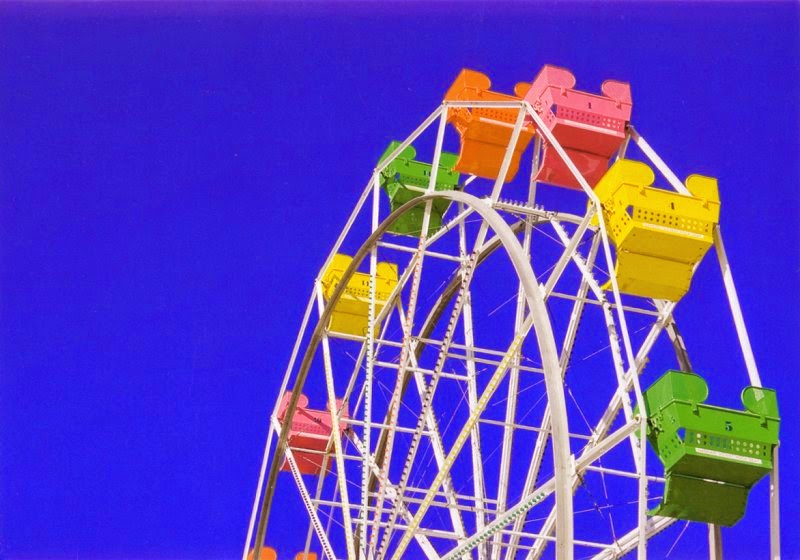 I picked this postcard up in Thun, Switzerland when we were visiting our son and his beautiful wife. I love the colours. It is so cheerful and happy. 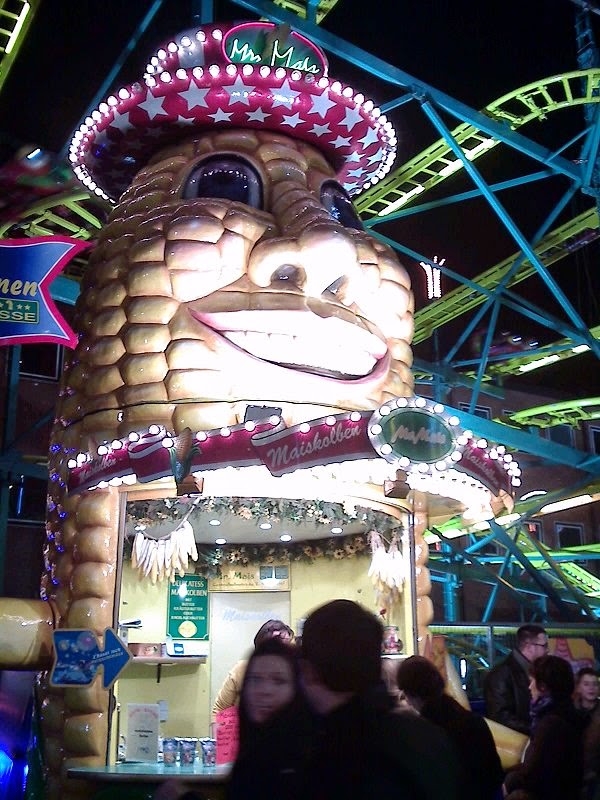 Our son Robin took this picture in Basil, Switzerland with his cell phone. "Mr. Mais" has been created to to sell corn on the cob, what a wonderful character. It reminds me of the post I did about giant fibreglass food that is used in Europe to advertise bakeries and other food shops. 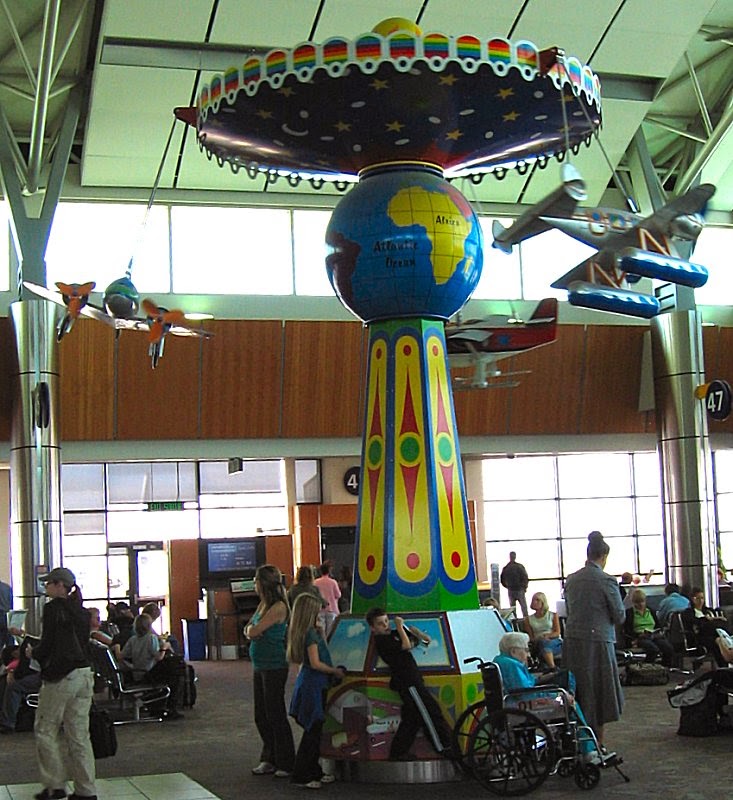 This sculpture and the one to follow of fairground rides are by Jeff de Boer. They are based on vintage tin toys. Although it is not an actual fairground ride I couldn't resist putting it in this post about fairground architecture and midway rides. On the side at waist level on each sculpture is a giant key that anyone can wind up - I just noticed that young boy is turning the key - the airplanes then fly around and around with their propellers spinning, I love it! 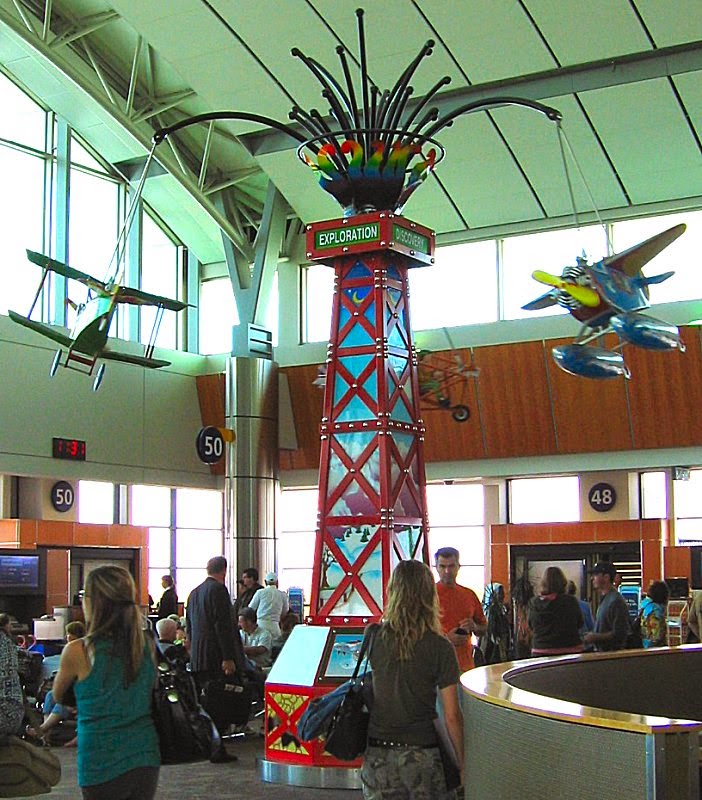 I photographed both of these sculptures in the Edmonton airport. 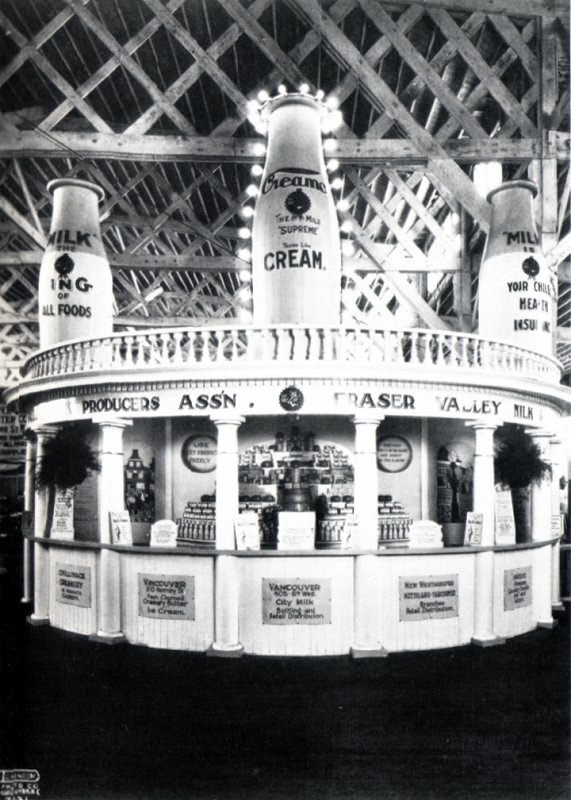 This last image is of a booth for the Fraser Valley Milk Producers at the 1926 Pacific National Exhibition in Vancouver, British Columbia, Canada. The serious columns and fencing around the top of the booth are definitely tamed down somewhat by those giant milk bottles, especially that electric milk bottle. This is one of my all time favourite booth designs. (Image from "The Pacific National Exhibition - an illustrated history" by David Breen and Kenneth Coates.)
Posted by Len at 1:30:00 PM

Thanks a lot, I hope to see some inspiration showing up in a piece or two. :)