Hello! I am back in the land of Blog.

We have been shopping and are still not finished. We still have baking to do. I did soak the Christmas cakes again with more liquor. Unfortunately the mincemeat will be made but will have to be used for next year as it has to mature. The liquid that is used is brandy and the longer it keeps the better it gets! We will be using store bought mincemeat this year but I will fortify it with a little extra liquor.

The last week of October I was contacted by a shopping centre that I occasionally do work for asking me to do some Christmas displays. I asked when they wanted them by and the response was "last week". Normally there is a lead up time for Christmas work. I had five separate displays to get ready in about three weeks. 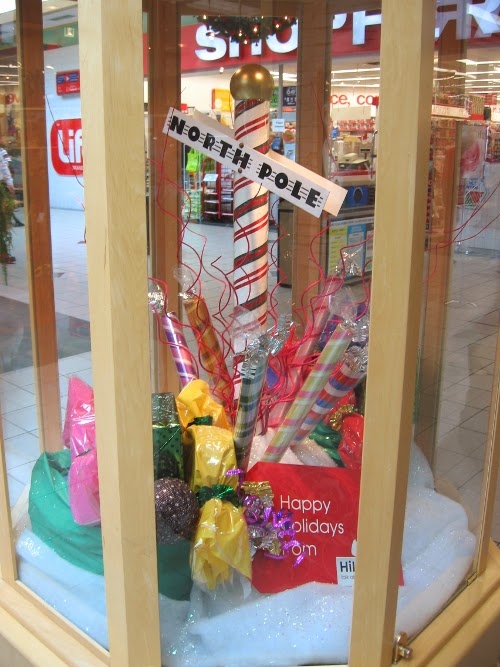 This is a small display for what they refer to as "The Curio Cabinet". They wanted it to tie in with the Visit Santa area in the centre court. I love the lettering that I used for the North Pole sign, it's called Tilt-A-Whirl. The candy canes are made from cardboard tubes that I have collected over the years with florist ribbons wrapped around them. They were then wrapped in cellophane. Other cardboard shapes were wrapped in pieces of dollar store plastic tablecloths and cellophane, tied off with wired mylar ribbon. 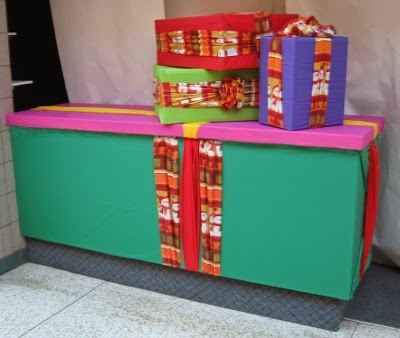 This area is the gift wrap area housed in an empty store. They wanted people to be aware that Christmas is coming and that this is the place to bring your gifts to have them wrapped. I love the colours that the cheap dollar store table cloths come in. The counter and the large cardboard boxes are all wrapped in the colourful gaudiness of these plastic pieces of happiness. How is that over the top flowery speech, but where else can you get such instant beautiful colours? 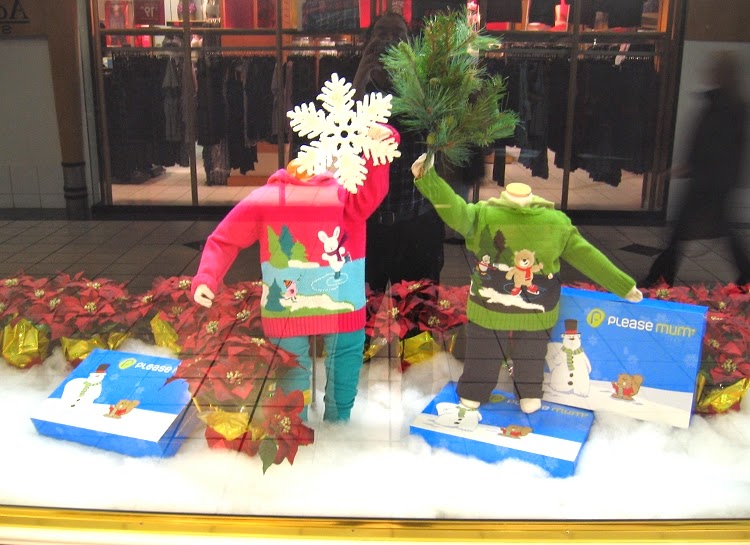 "Please Mum" is a store in the shopping centre that sells children's cloths. They were pleased as punch to have their clothing displayed in this empty window by the children's play area. In January this will be boarded over and torn down for the beginnings of the major expansion that the shopping centre will be undergoing. 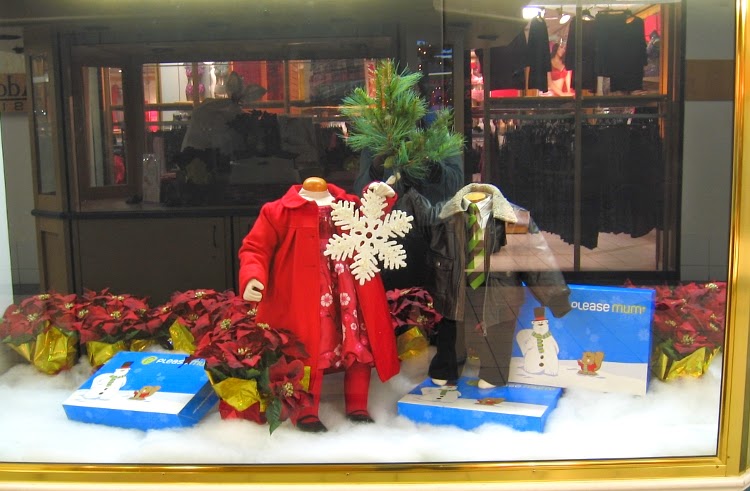 After ten days I changed the cloths on the mannikins. The mall had all of these pointsetta plants, snow flake, and pine branch in storage from a previous Visit Santa display. I used some of the batting that is used for the Visit Santa area and finished it off with some gift boxes from the store because there was no signage available. The window is simple and very eye catching. You don't have to fill a window with merchandise. 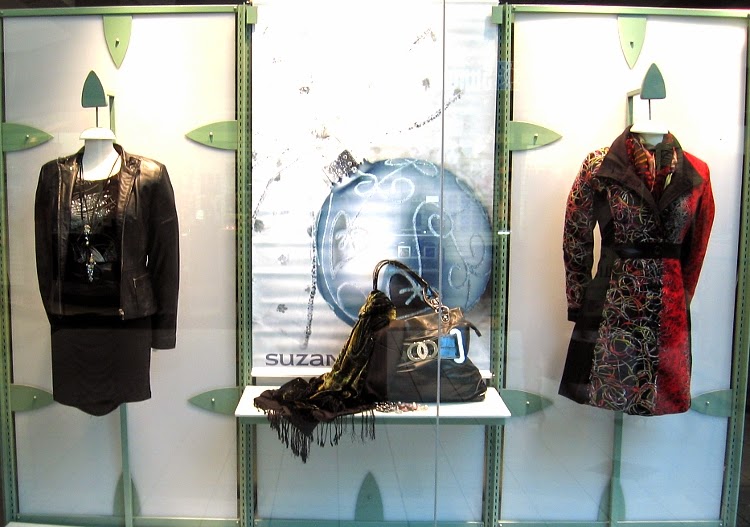 Last Thursday, December 16th to be exact, I got a frantic call from the marketing manager asking me to come in and do some damage control. A shop that was leaving in January ended up going into receivership and had vacated the premises. This was in the very visible centre court area. Fortunately all of the fixtures and manikins were left behind.

I went to Suzanne's, the shop that was going into this area in the new year and gathered merchandise to crate the displays. This photo and the following one are on one side of the store. 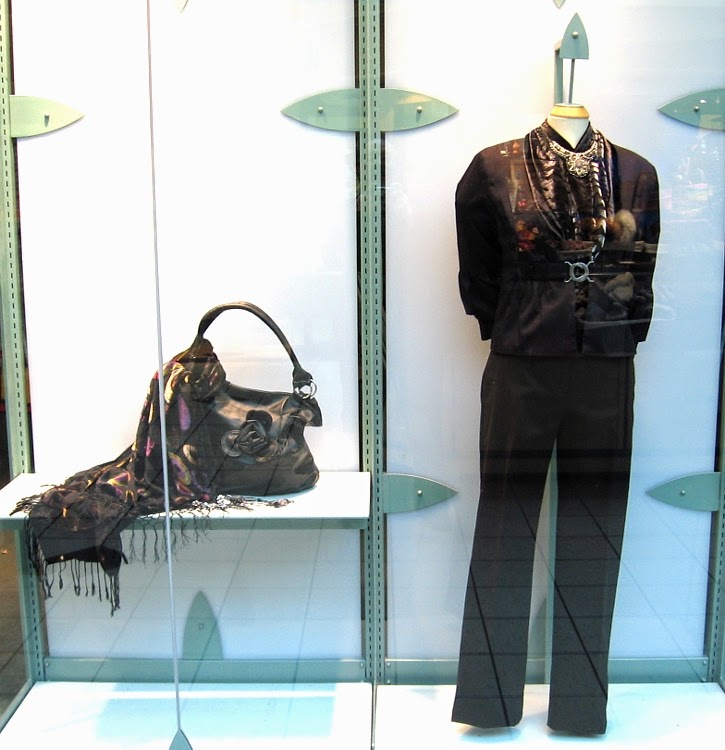 I put together seven groups of clothing and gathered up a bunch of necklaces and hand bags and headed down to the store. 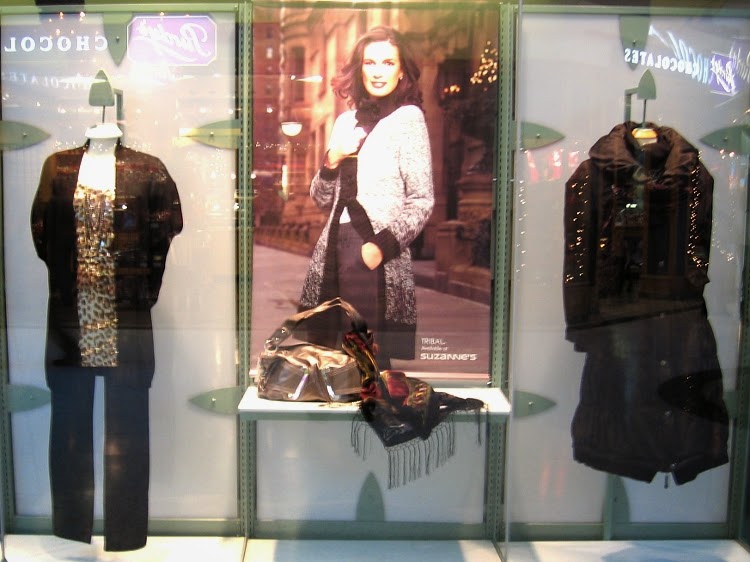 There were two posters available to use so I grabbed those as well. 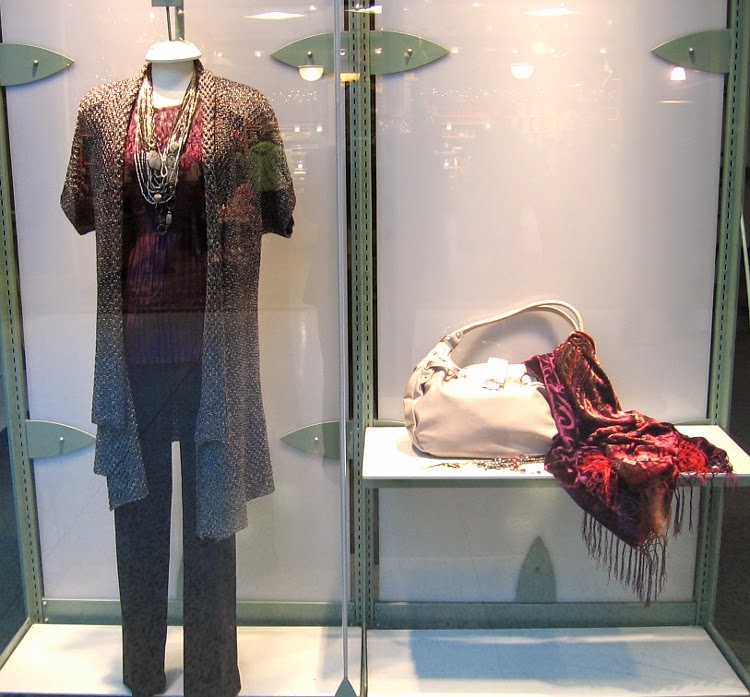 This photo and the following one are on the other side of the store.

These two displays as well as the previous two displays are side by side. I probably should have taken a long shot of the entire window but it was a very busy Saturday afternoon when I finally finished the displays.

The front store entrance had hoarding up and the shopping centre will be putting graphics on it telling of the new store to be there in January. Beside the front entrance was this one small area that I put this bust form in. I used bracelets and necklaces, as well as a few well placed straight pins, to hold the scarves in place because there were no brooches in the shop for sale.

I will do a separate post about the big window display. The photos didn't turn out so they have to be redone. I am also going to show some of the other Christmas windows in Victoria. The small independent stores do some very nice displays. Department store windows no longer seem to be important at Christmas. The bottom line dictates that it doesn't pay. 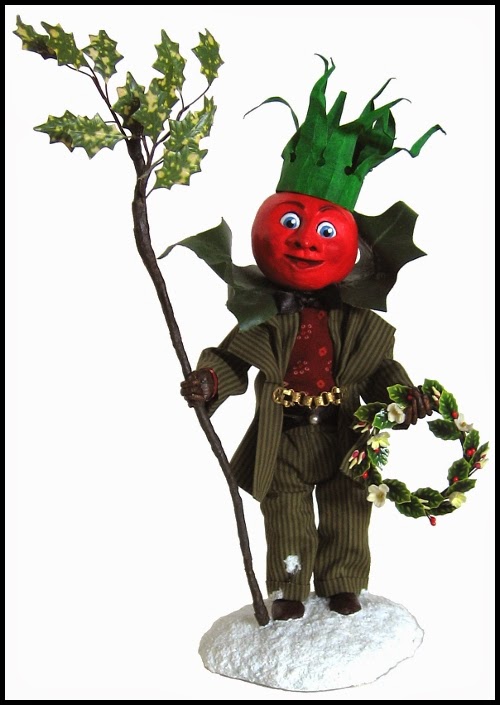 Don't forget to visit SpookyTimeJingles if you haven't been there already. My blog and website links were posted but I forgot to put a contact link on my guest artist page. If you would like to purchase ilexander or any of the other pieces contact me at lenbenny@shaw.ca. 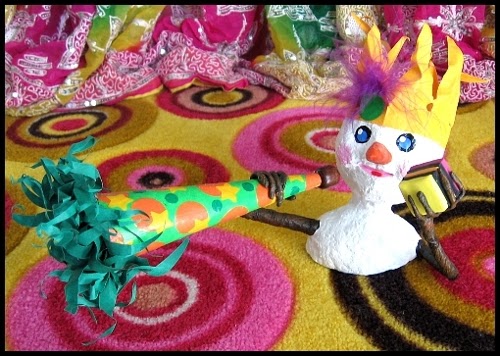 Pierre is ready for the Christmas party with his hat and party horn. His head is hollow so lots of treats can be placed inside. 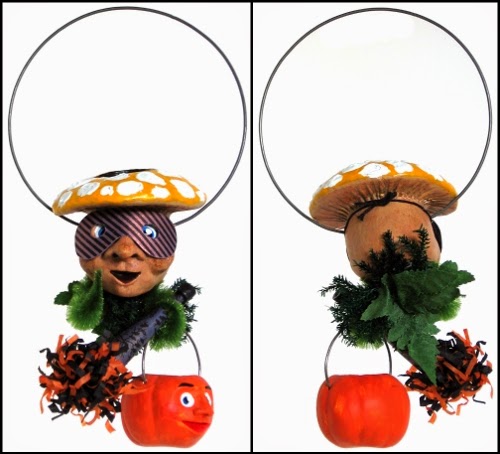 Miles is a candy container ornament. Treats can be put in his head as well a his pumpkin treat pail.
Posted by Len at 8:40:00 AM

Glad to have you back in Blogland. You have been immensely busy! All the displays turned out wonderful! Love the idea of the bright colors (and cheap tablecloths) for the gift wrap area.
And your Holly King is marvelous!
A joyous Yule to you and yours! :0)

Wow -y ou have been a busy elf! - those windows are perfect - how do you do that??? nothing out of place - perfectly balanced!!
YOu know the candy was my favorite :)

- big hugs from B