This blog post covers all holidays and celebrations as the Jack Horner Pie was used as a table centrepiece and party diversion for all of the holidays as well as bridal showers, baby showers, birthdays, or any other event that you can think of. 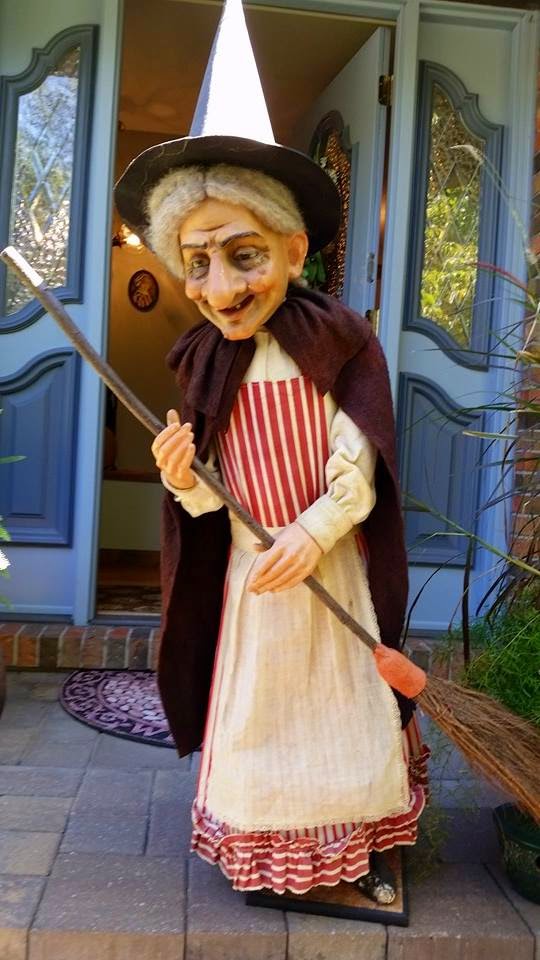 This is an interesting blog post because the idea for it started once I saw the photograph and comments about this giant candy container witch that was posted in the Facebook group Early Hallowe'en. I had mentioned that I thought that it was used as a Jack Horner Pie, most people it seems had not heard of Jack Horner Pies.

Linda Eakin is the owner of this amazing candy container. She mentions that it is the size of a small child; 56 inches from the base to top of her hat. 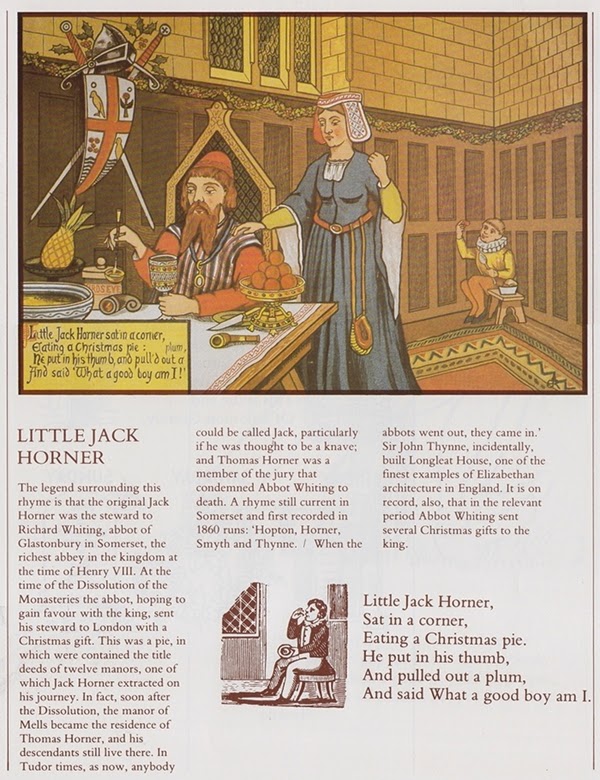 Here is the background to the nursery rhyme Little Jack Horner, I scanned the page from "Popular Nursery Rhymes - Mother Goose rhymes with explanations and illustrations." I wonder who was first inspired to use this nursery rhyme as a party diversion. Diversion is what they were referred to and that best describes it as it is not a game really.

My mum started the tradition of a Jack Horner Pie after the Christmas dinner when I was in my early twenties. I am not certain why she did, probably it was something from her childhood that she wanted to recreate. We would have Christmas crackers before dinner and then after dinner was the Jack Horner Pie. Look at it as another reason to give and get a one more gift and maybe some more candy!

The first pie that we had was a very basic affair, an old cardboard ice cream tub with Christmas paper around the outside, tissue paper covering the top to hide the gifts, and ribbons coming out of the centre to each place at the table. At a given command everyone pulled their ribbon to retrieve the gift from the container. It started to look its age after several years of use so I decided to surprise my family with a brand new one. 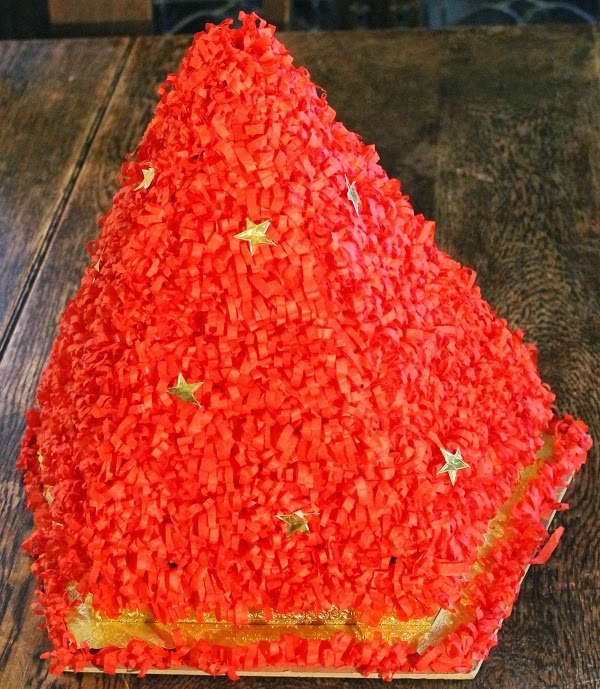 This Jack Horner Pie is very elaborate to say the least. It is a 5 sided pyramid that stands 13 1/2" high and is about 15" across. The outside is covered in hand cut red tissue paper loops with vintage Dennison gold stars spotted on the outside. The bottom part of the pie is a 2' deep pentagonal box with a 2" ledge decorated with vintage gold paper edging and more tissue paper loops. 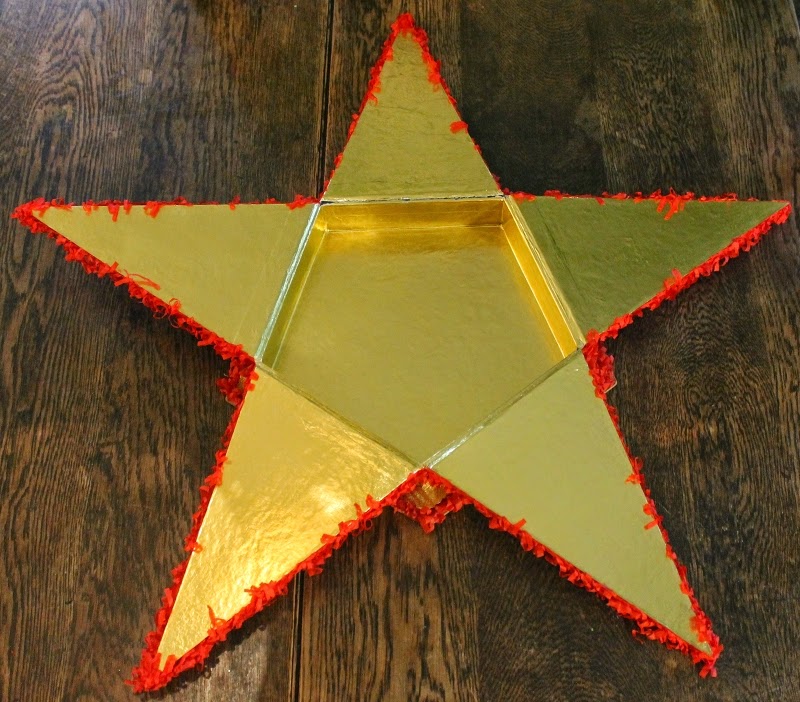 Once the gifts are pulled out the sides of the pyramid flop open to reveal a giant gold star that is 30" across. Like I said previously this is elaborate to say the least! 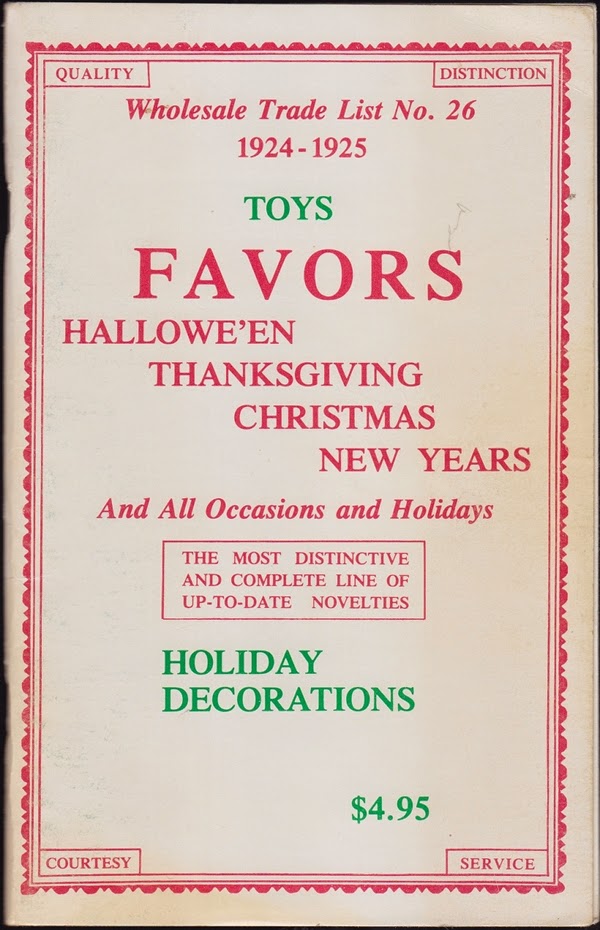 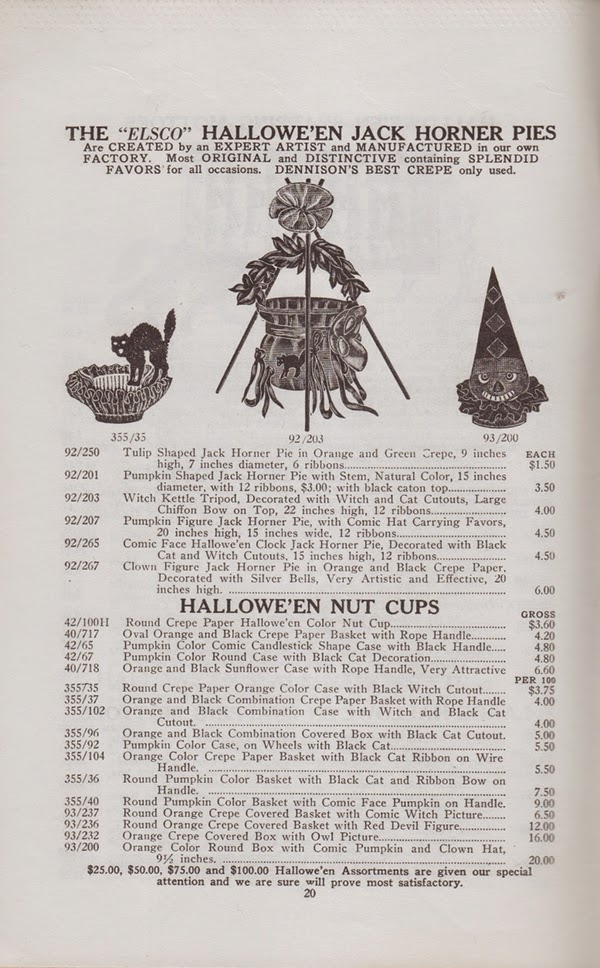 On this page you can see listed 6 Jack Horner Pies for Hallowe'en. All of these were made in the United States. They were all very large. 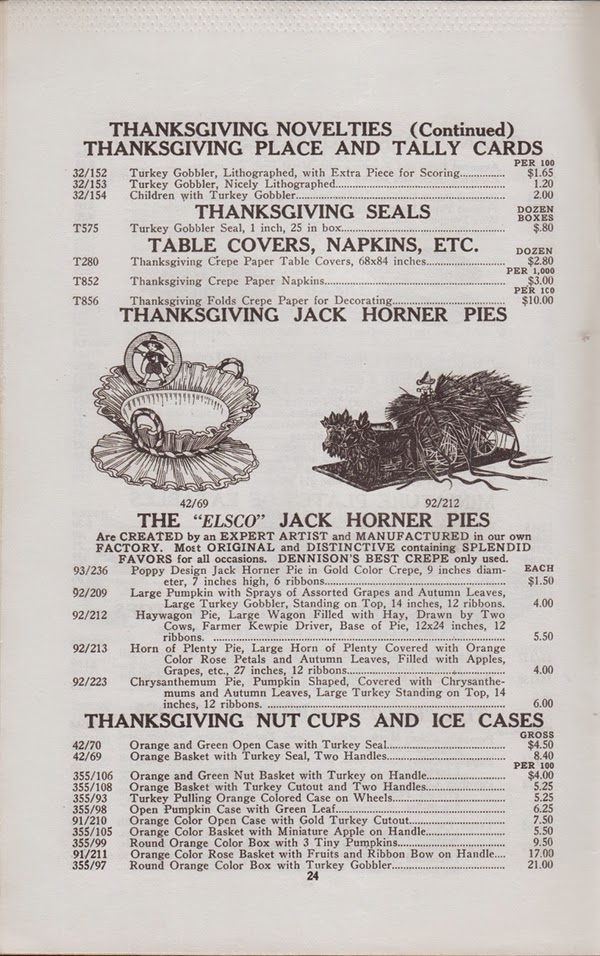 ELSCO had 5  Jack Horner Pies for the Thanksgiving market that year. 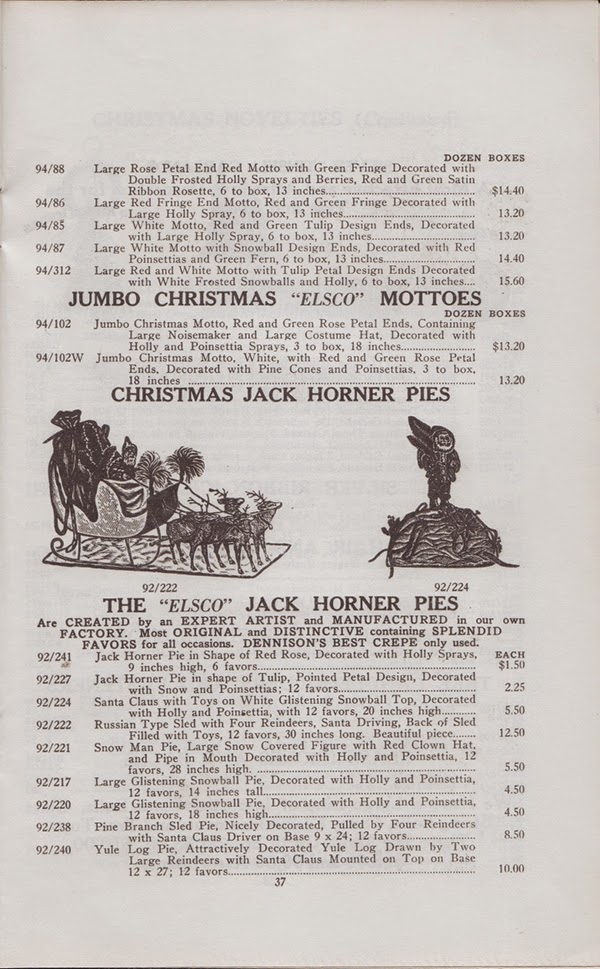 Christmas had the most pies available, 9 Jack Horner Pies, they sound delightful.

I would loved to have seen all of these Jack Horner Pies, the descriptions sound intriguing.

On the back of this book is this information. I doubt that it will be of any use but if someone wants to try track it down go for it. 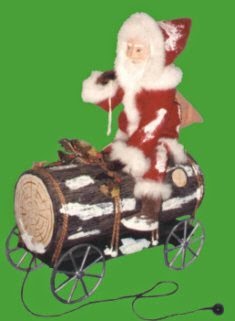 This large "Santa on a Yule Log" that I created in the early 1990's was bought by a friend. Unfortunately this is the only picture I have of it. It was about 18" high and about 18" long. The back end of the log has a plug that pulls out to reveal the gifts inside for the guests at the party.

The following images are scans from various Dennison party books that I own, the bogie books are reproductions. 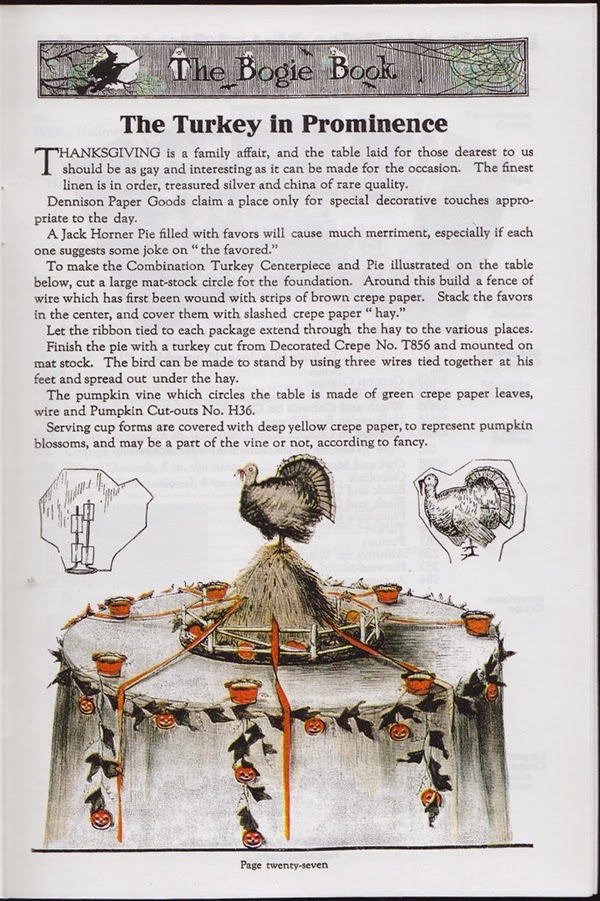 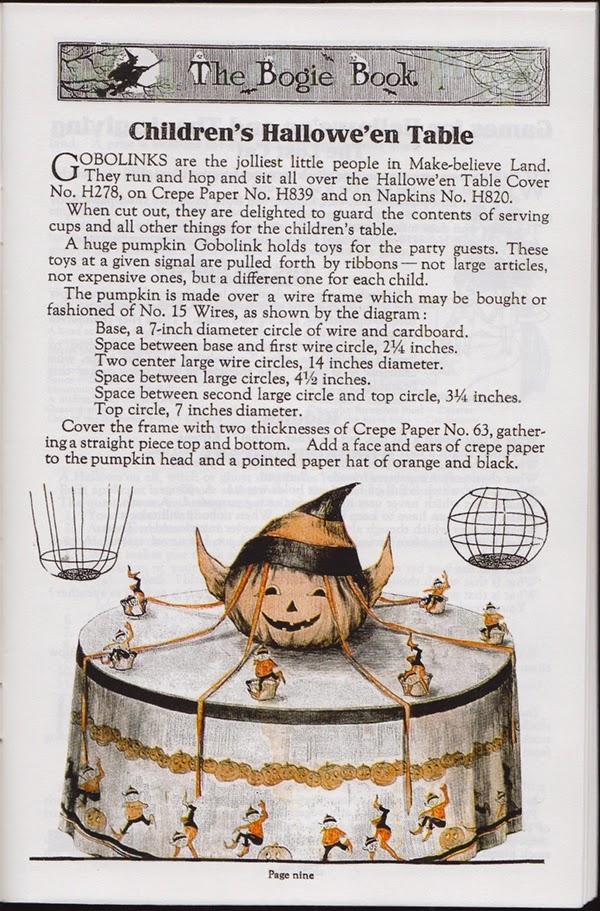 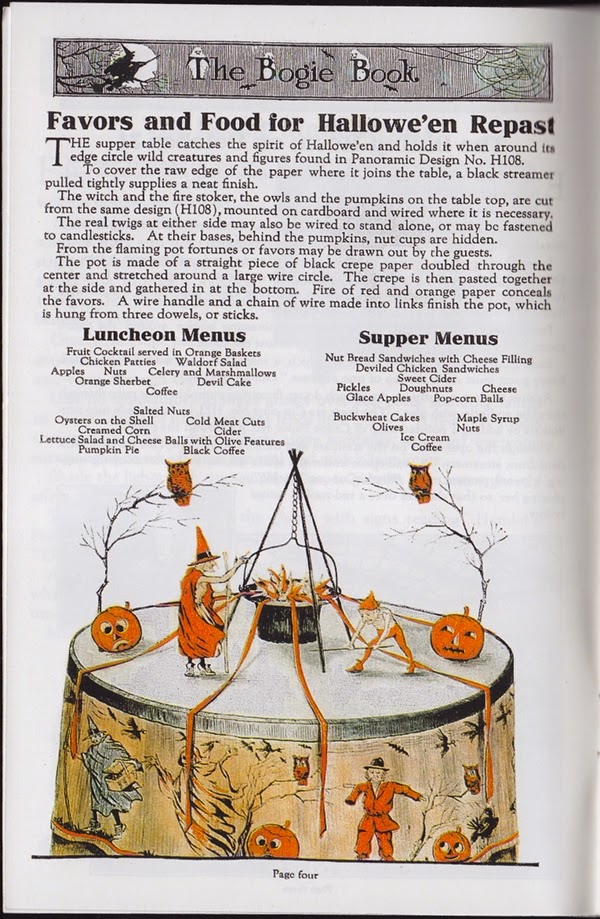 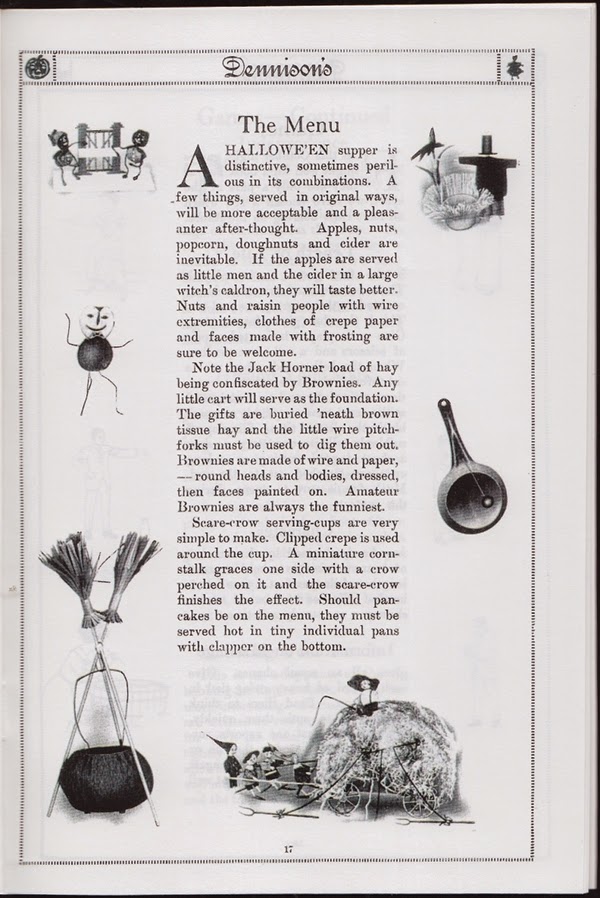 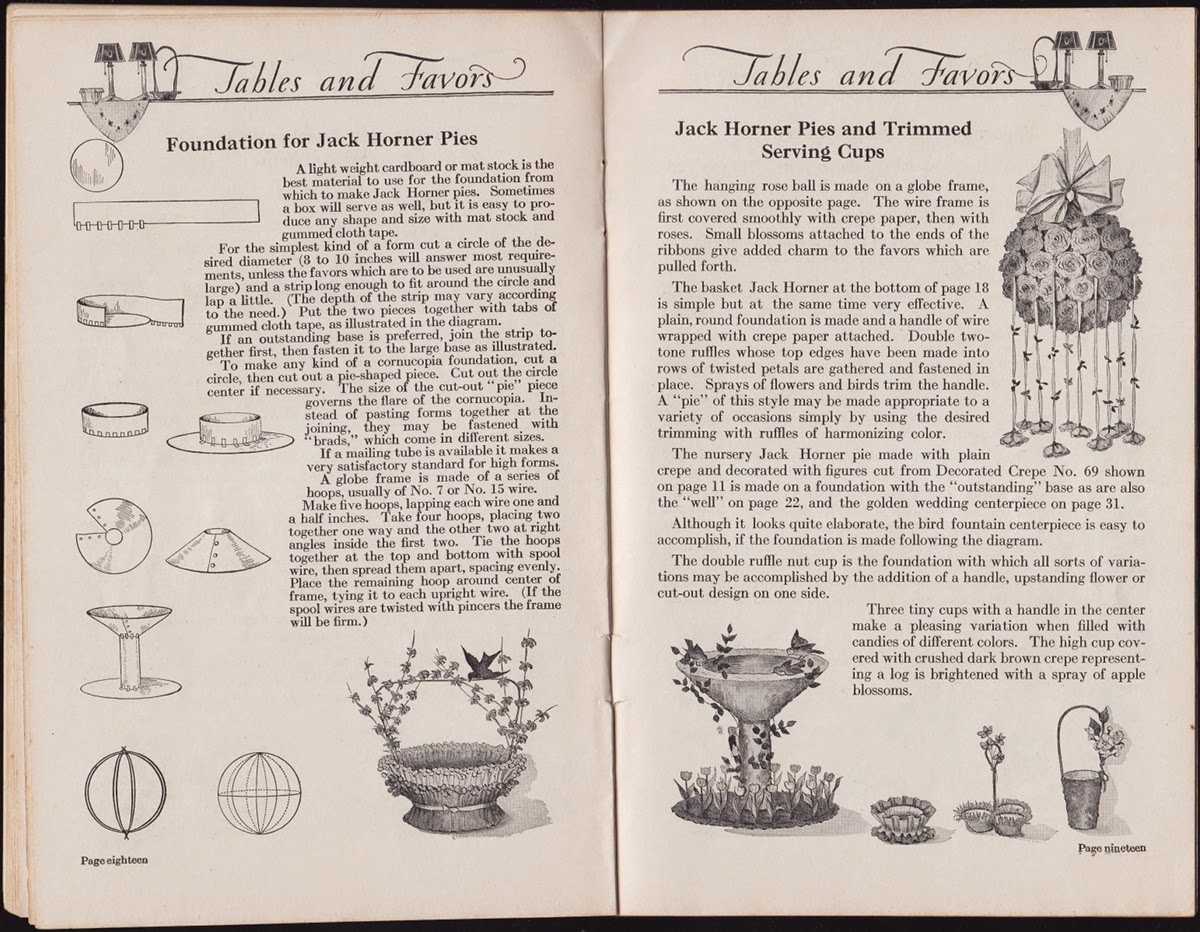 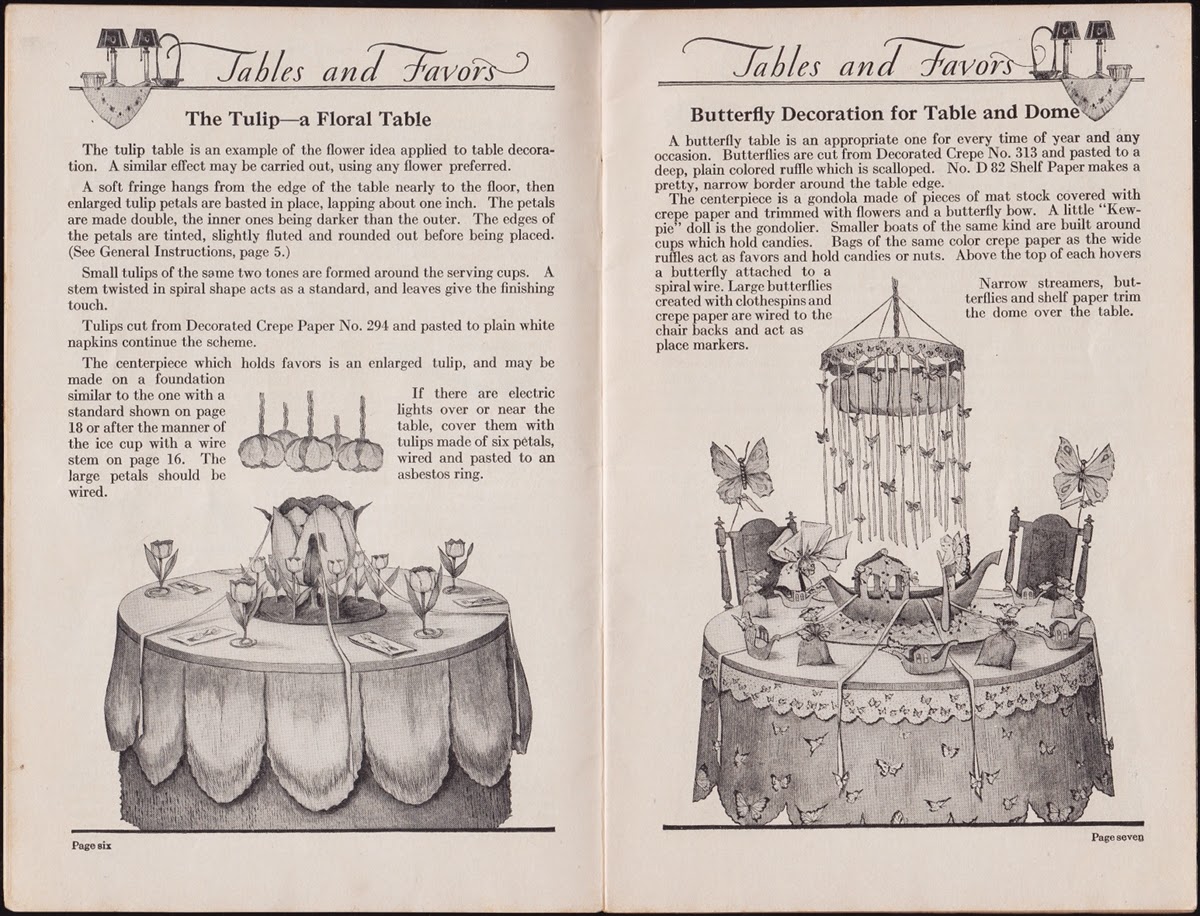 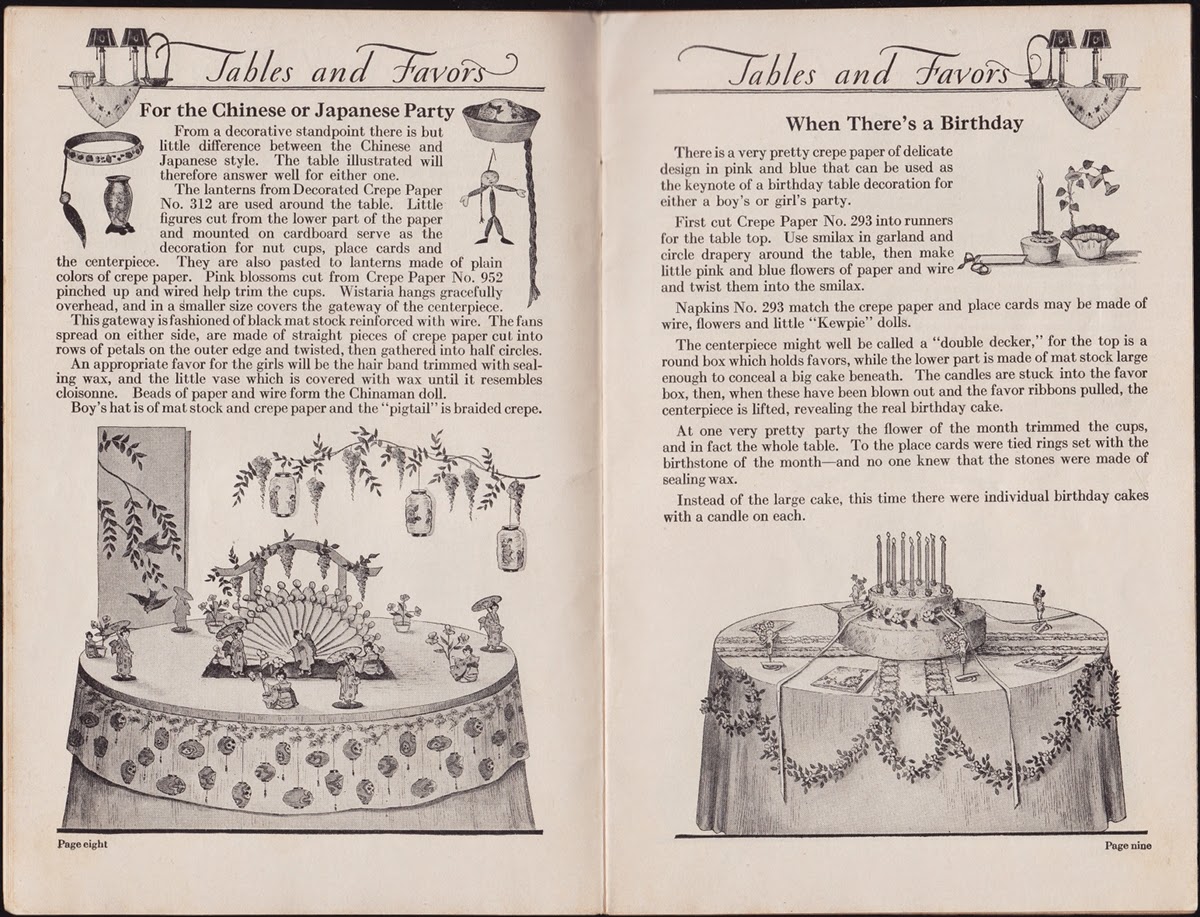 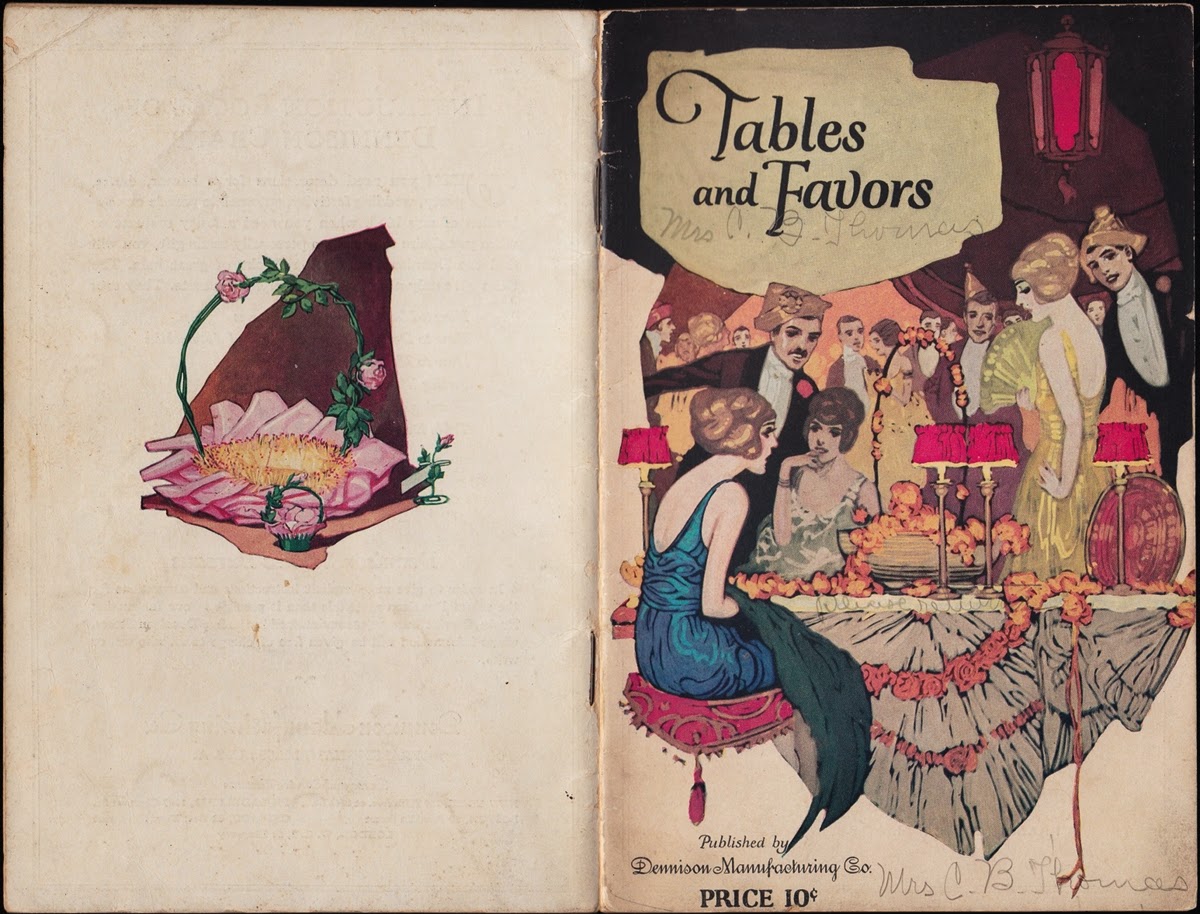 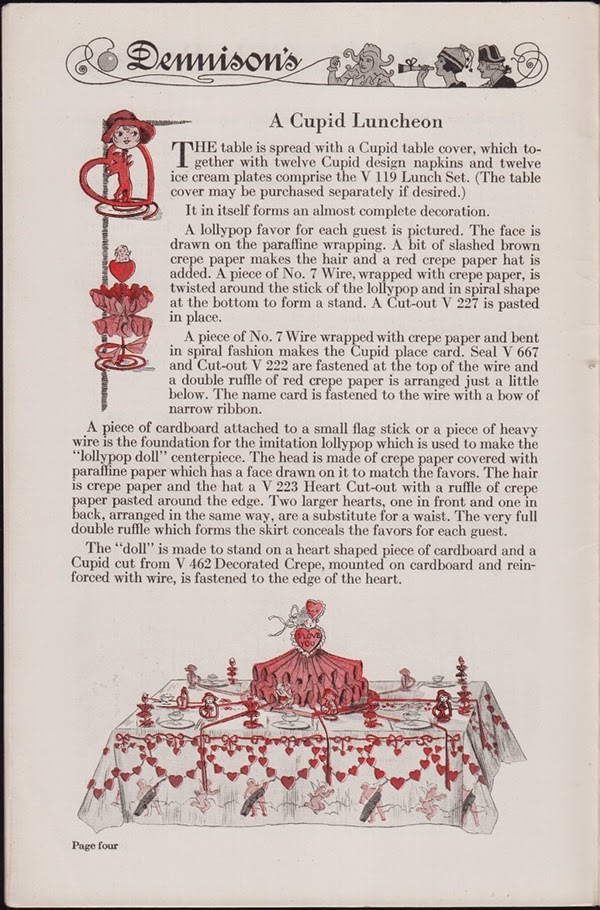 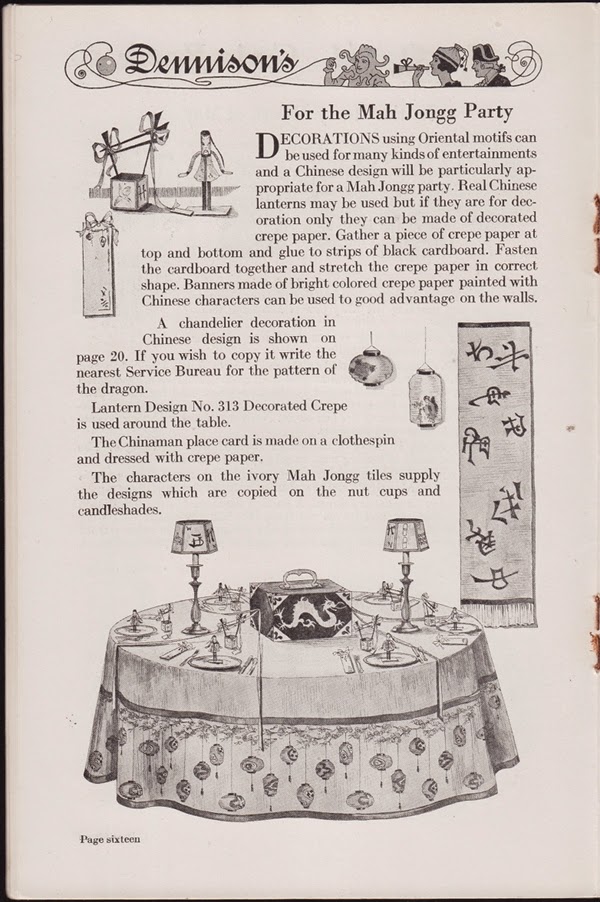 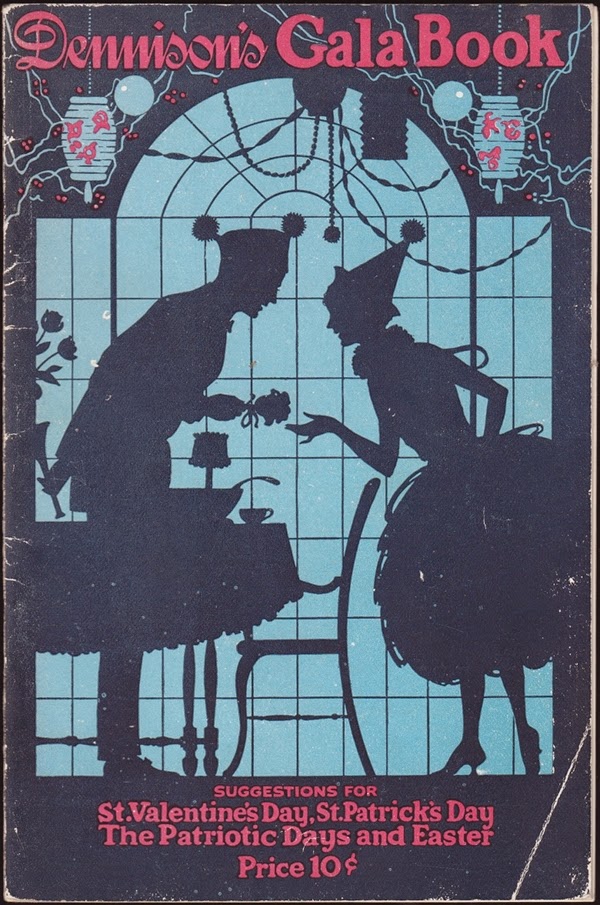 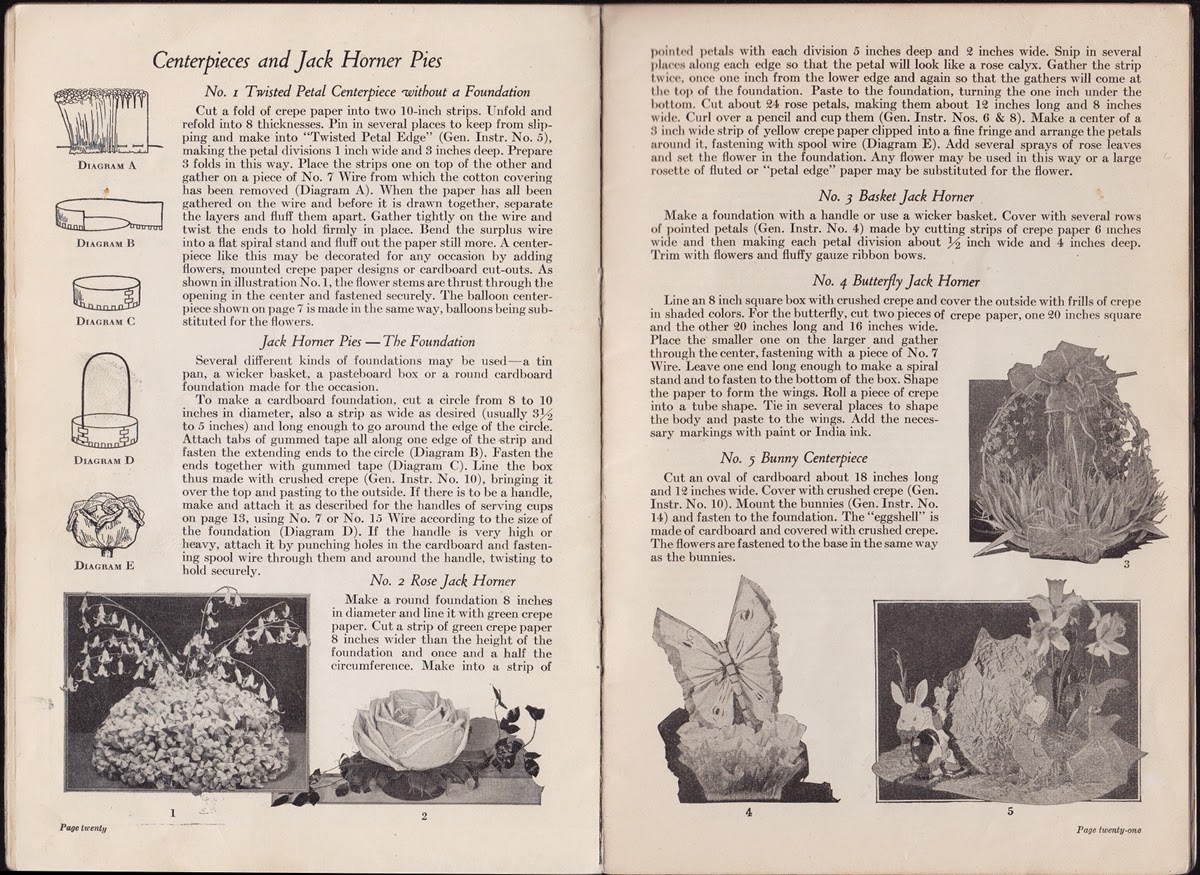 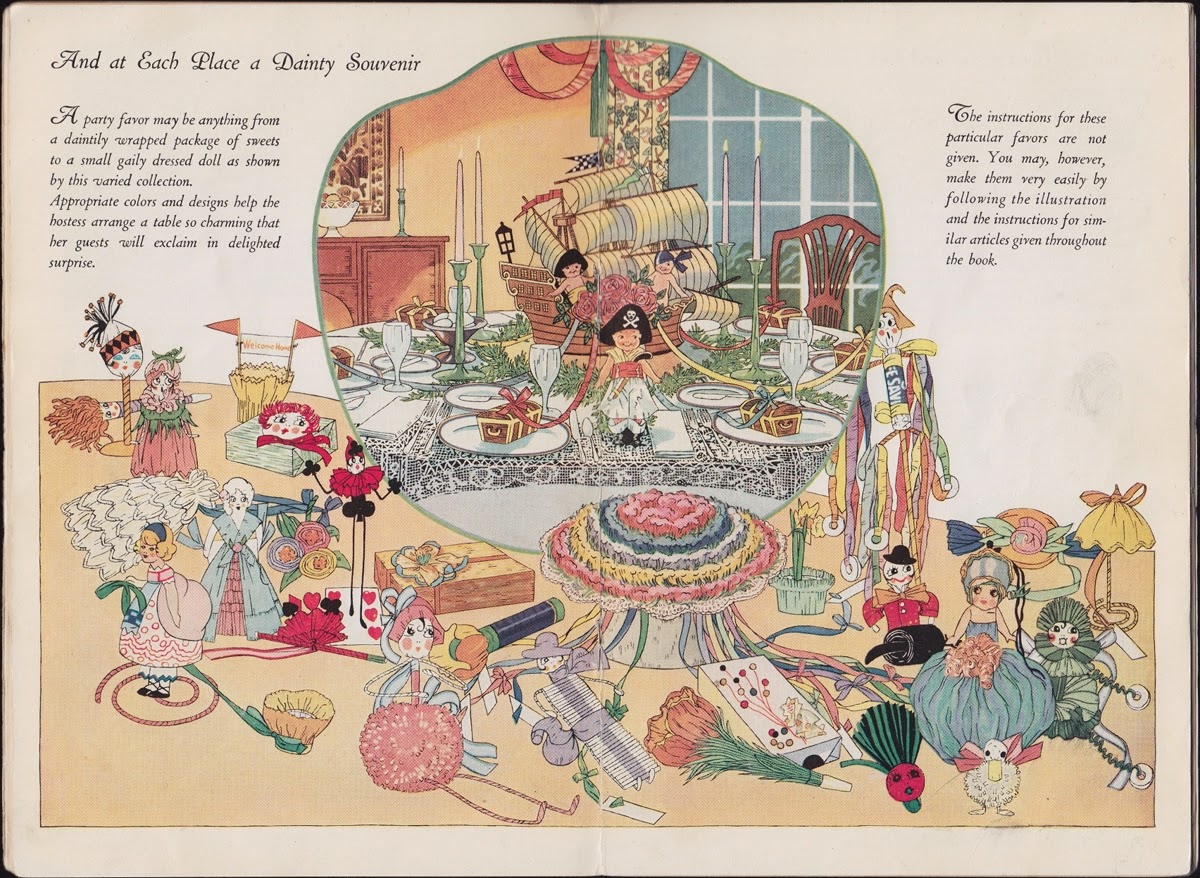 As you can see Jack Horner Pies were used at various holidays and celebrations. When I first saw the giant candy containers I immediately assumed that they were used as Jack Horner Pies. If anyone has any information to add to this please leave comments on my blog post. 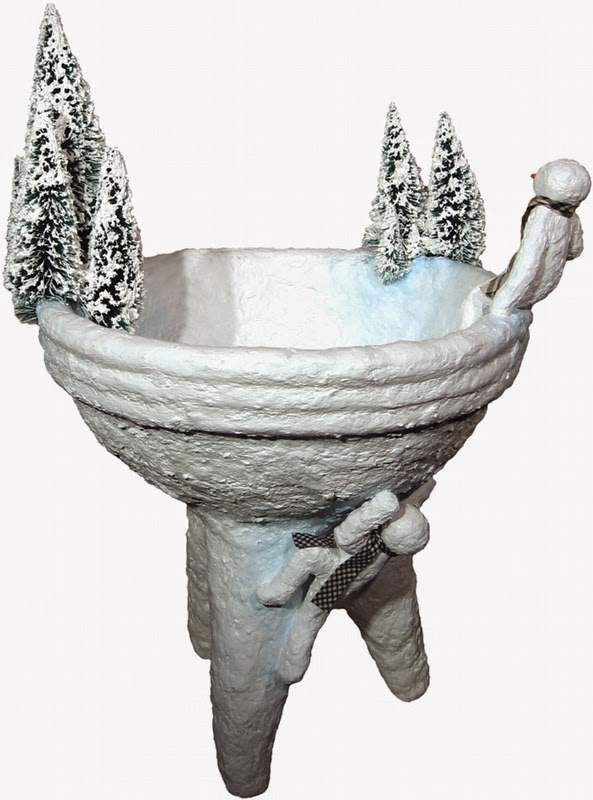 "The View From the Rim of the Twentieth Century Modern Snowball was Spectacular" is available in my Etsy shop. In the description I give instructions for using it as a Jack Horner Pie. Follow this link to my Etsy shop to purchase the Snowbowl.
Posted by Len at 10:01:00 PM

Thank you for this post! We too had a Jack Horner Pie after our Christmas dinner -- here in the US. It was a way for us children to receive "one more" small gift at the end of Christmas day. My mother would wrap a card board box with wrapping paper and cut holes in the side. When we gathered for desert, there were the ribbons, coming out of the holes and reaching to each of our plates. My brother would be dying of curiosity, tugging on his ribbon so that the gift might poke through the hole.

My mother tells me that my great aunt would decorate the top of the box with a beautiful winter scene.