Since last mid September I have been dealing with prostate issues; surgery will be happening in a couple of months. I also had a hernia occur at the same time and the surgery for that will happen after the other surgery, unless God heals those two areas like He healed my back almost two years ago. Needless to say I am moving around at a somewhat slower pace.

All of this makes me sound like a total wreck! I'm not, life happens!

I was so late this year with taking down Thanksgiving that I almost didn't put up any of my Hallowe'en decorations. I did put up decorations but it happened in three seperate stages, each time saying, "Well, that is all I am going to do". 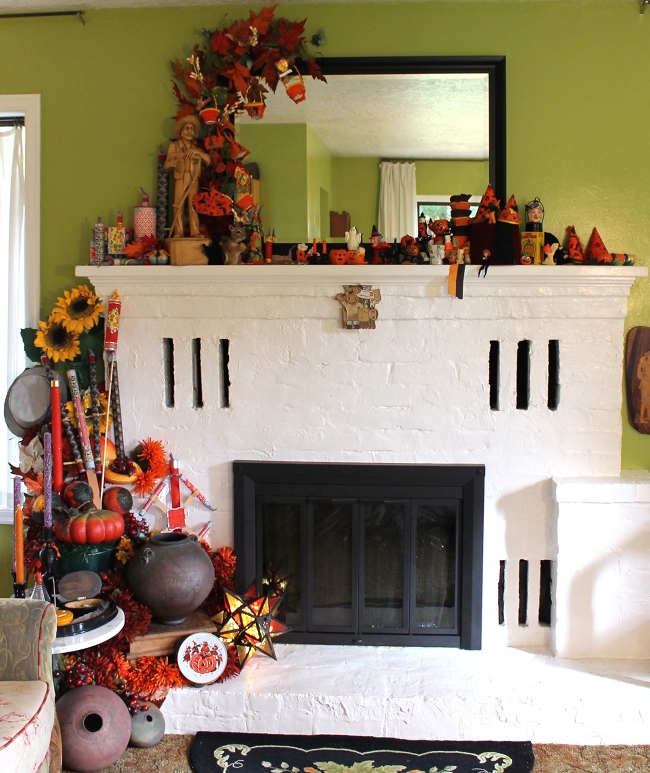 This year's Hallowe'en display is slimmer and very different. I began taking down the Thanksgiving items five days before Hallowe'en. As I was doing this I decided I would do a token display.

I left the wooden stool and all of the leaves and flowers in place. Canadian Thanksgiving is two weeks before Hallowe'en so October 31 for me has included coloured leaves, flowers, berries as well as pumpkins and squash of all sorts. 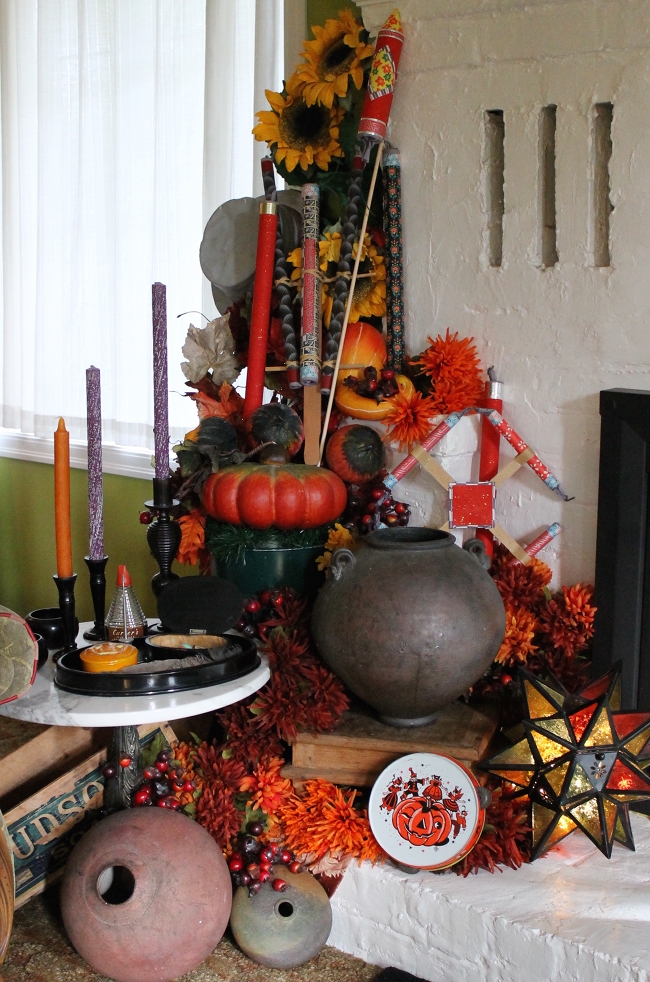 Fireworks were definitely a part of Hallowe'en growing up in Victoria. More and more people are setting them off in their yards again. I love it!

I went into the garage and brought out the prop fireworks that I made many years ago for a Hallowe'en window display.

These were arranged on the hearth section and on the mantle. The raku pots were added and that was all that I was going to do. I was exhausted.

The raku pots are always on the hearth, the colours are muted and autumnal, that is the only reason that they were included in the display. 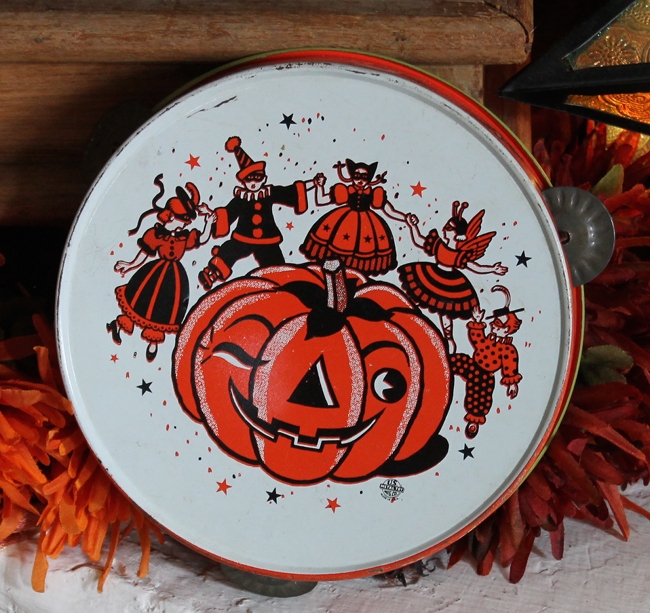 This metal tambourine was a gift from a friend for repair work done on some of her vintage Christmas items; I am glad that she had doubles of it. Thank-you Karen, I love it. It was added later along with the other Hallowe'en collectables. 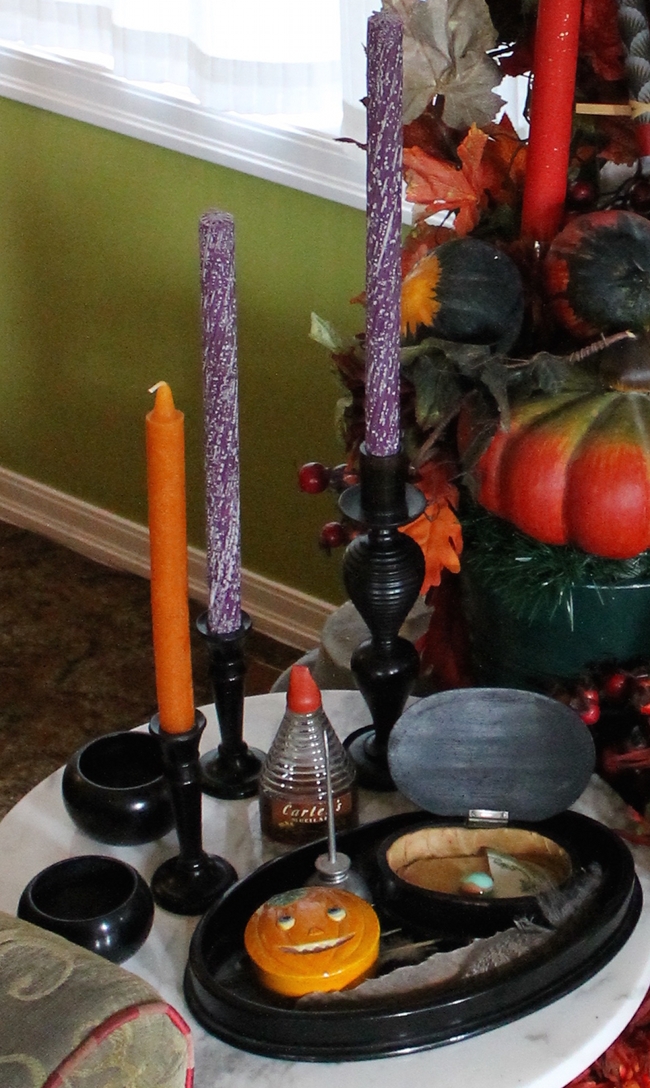 My bottle of Carter's mucilage, an old oil can, a vintage marble, a piece of a broken saucer found in the garden, and feathers were added. Two purple and one orange candle finished off the vignette.

When the few Hallowe'en items were introduced to the merry mix I added this wonderful Japanese ceramic pumpkin candy dish.


Two days before Hallowe'en I decided that I would put out the few items that were in an antique cupboard in the garage; everything else is packed in boxes and stored away. 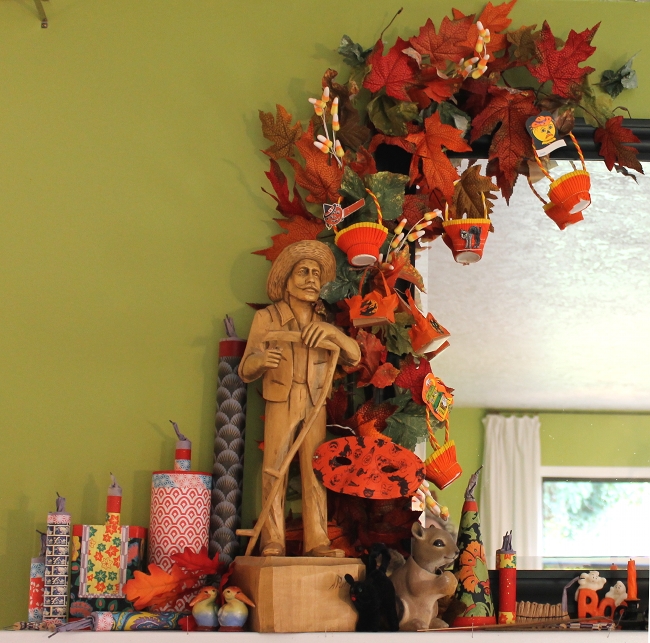 The hand-carved farmer and the squirrel nodder were part of the Thanksgiving display, two of my favourite pieces. Those two pieces and the fireworks were all that going to be in this years "sort of" Hallowe'en display;  and then the few Hallowe'en items were brought out.


These were the fortunate items to be displayed this year. 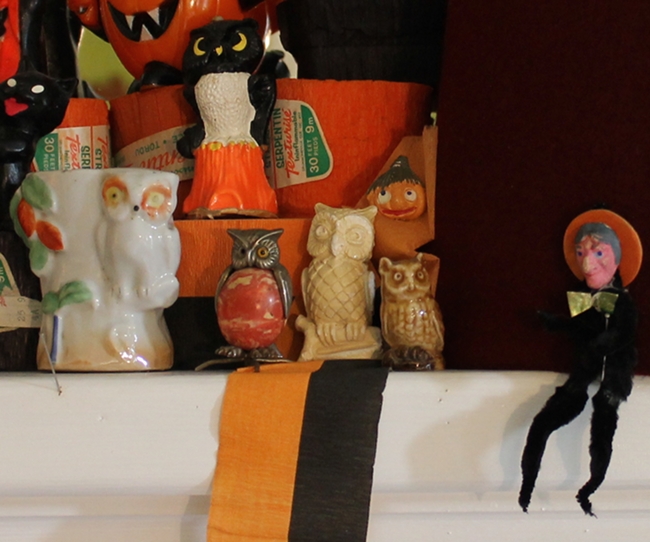 Here is a close-up of some of my owls. The egg cup is Japanese. I picked it up at Salvation Army about two months ago, I have never seen this design before. The owl beside the eggcup is a tape measure. His head, wings, feet, and branch that he is standing on are brass and his body I think is bakelite.

The little pumpkin head in behind is a stickpin.

The chenille witch is sitting in front a burgundy fez so she is a little difficult to see clearly.


The rest of this year's display; party hats, Gurley candles, a fairly new plastic pumpkin whistle, a celluloid witch lantern, a wind-up black cat, and three pumpkin cups each with different glaze combinations. The pale peach pumpkin cup I picked up in a thrift shop in Sydney, a town about thirty minutes drive from us.

Oh, I forgot to mention, the pins that you see marching along the front of the mantle were supposed to hold lights in place with some sort of garland or leaves to disguise the wires. That never happened, I was just to tired and busy to do it or even care about doing it!
Posted by Len at 2:36:00 PM

Thank-you! I went to your blog but it seems that you are blogging any more. Do you have a Facebook page?

Len it all looks lovely, if this is your 'slimmed down' version, all I can say is wow!
And to be 'bothered' when you are not feeling well is a great show of tenacity!
Hope everything goes well with the ops and that you feel much better soon.
Happy Holidays to you sweetheart :o)
-Cee

I love this. You inspire me, Len.