Oh boy, am I late in posting this!

There is not a lot of room in the home so the mantle and fireplace is where I focus all of the seasonal displays. Christmas is the one exception to the rule. The living room and dining room are totally over the top Aladdin's Cave overwhelming!

This year I decided to display most of my paper Hallowe'en items. I had a lot more than I realized, this is about half! After putting all of the decorations away I discovered a box that had been overlooked, more cardboard and paper items!

This poster hung on the wall above my computer. It was tucked in a drawer, forgotten about, this is the first time that I have displayed it. 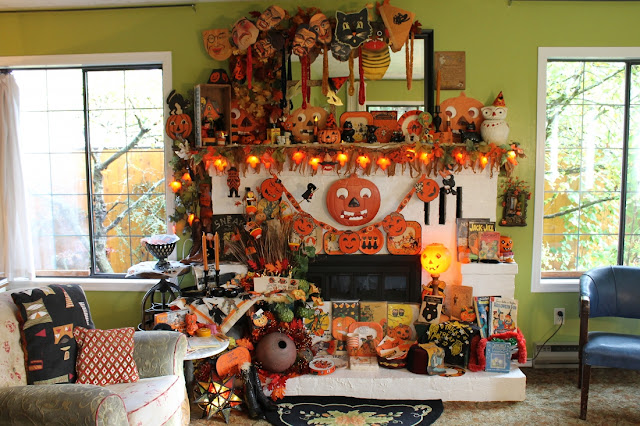 Here is a photo showing the whole Hallowe'en display. The only item moved from the Thanksgiving display was the small green stool. It went from under the marble top table onto the hearth on the right hand side. 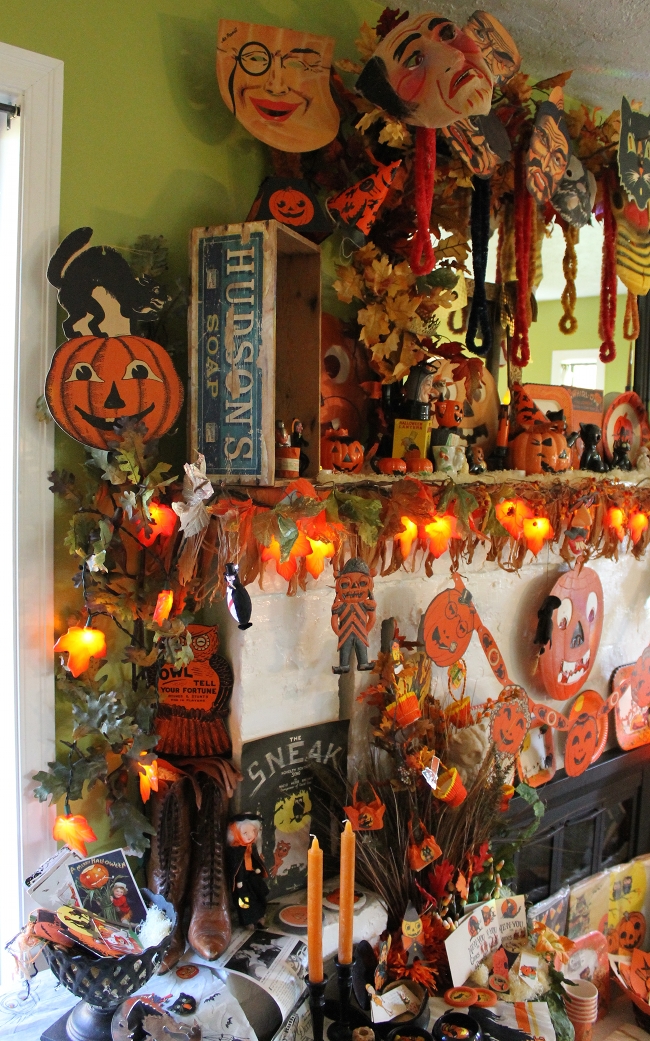 Walking into the living room you can see a few items that are not completely visible from the front, the black cat on the pumpkin, the owl fortune telling game, and the side of the wooden box. 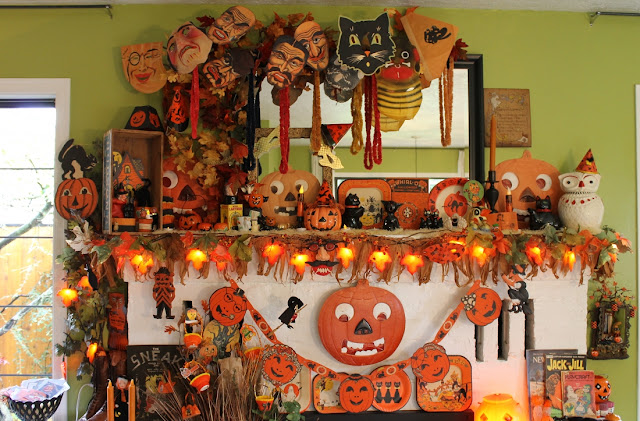 I hesitated in putting this picture in the post but decided to anyway, it's just a little closer look at the top half of this year's display. 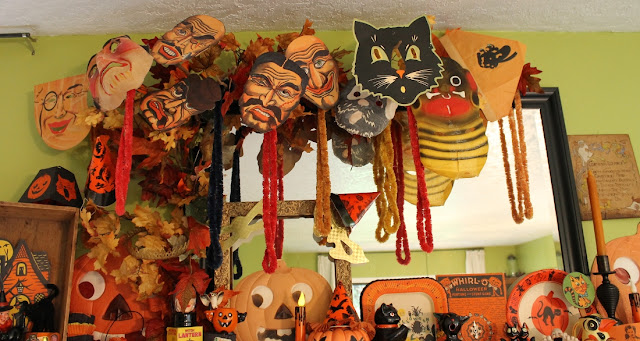 The bare branches that were added into the mix of faux autumn leaves have been used to hang the Japanese rice straw leis, paper masks, gauze masks and the orange party hat on the right. The Mr. Peanut mask I purchased a couple of months ago. The four paper masks between the American Indian gauze mask and the paper black cat mask, my favourite, I think are villains from the Dick Tracey comics. 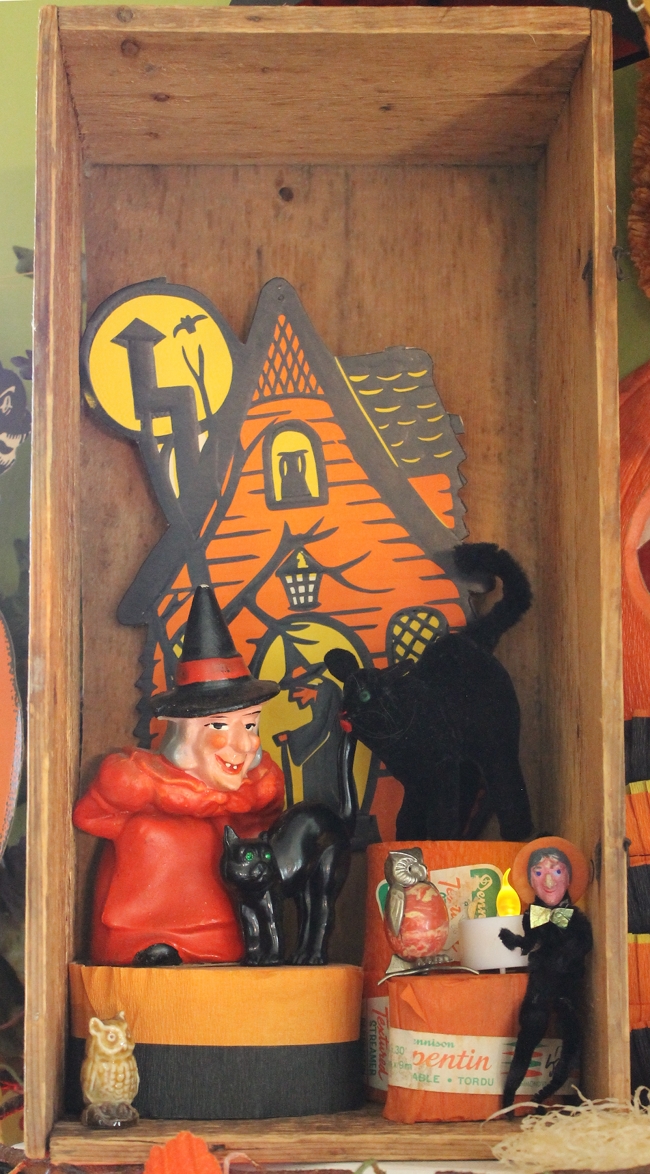 Here is a better look at the vignette that I created inside the Hudson's Soap box.The owl on the roll of dennison serpentine is an antique cloth tape measure. The witch candy container was made in U.S. zone Germany. the cat in front of her is a plaster filled celluloid cat. 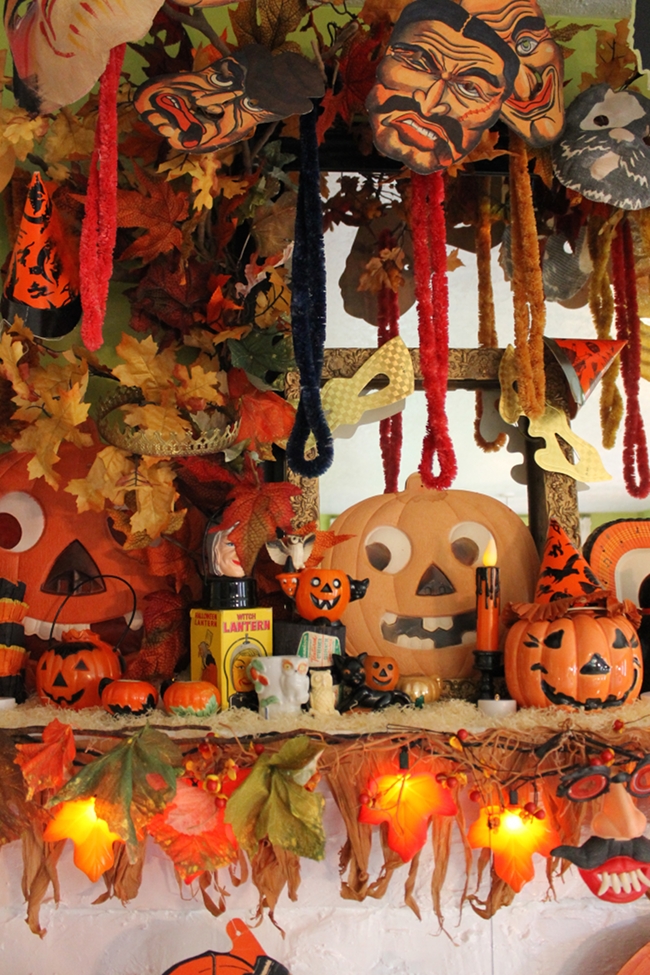 Here's a closer look at the left side of the mantle, I love the cascading moss like effect that the leis give to the scene. 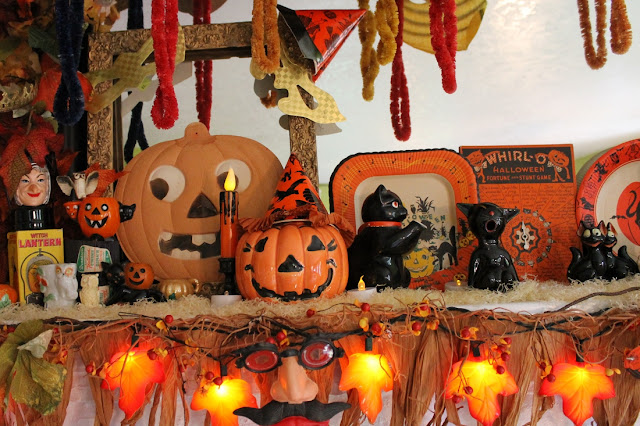 This picture shows some of the previous picture as well as some of the following picture. I wasn't certain if I should include it but you get a better look at the celluloid witch lantern, the black teapot and the smoker. 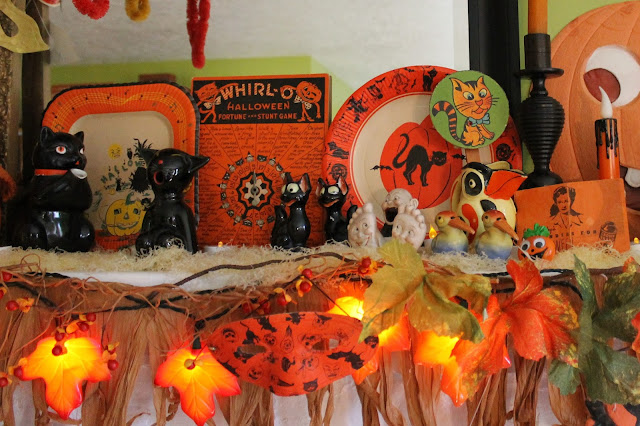 The little fellow with a face on each foot is a Victorian match holder. The top of his head has holes in it for holding matches as do each of his toes. I suppose the burnt matches were placed in his mouth. He is not a Hallowe'en item but I have seen a lantern in the shape of a foot with a face on each toe, I love this little guy and used the likeness to the lantern as an excuse to showcase him. 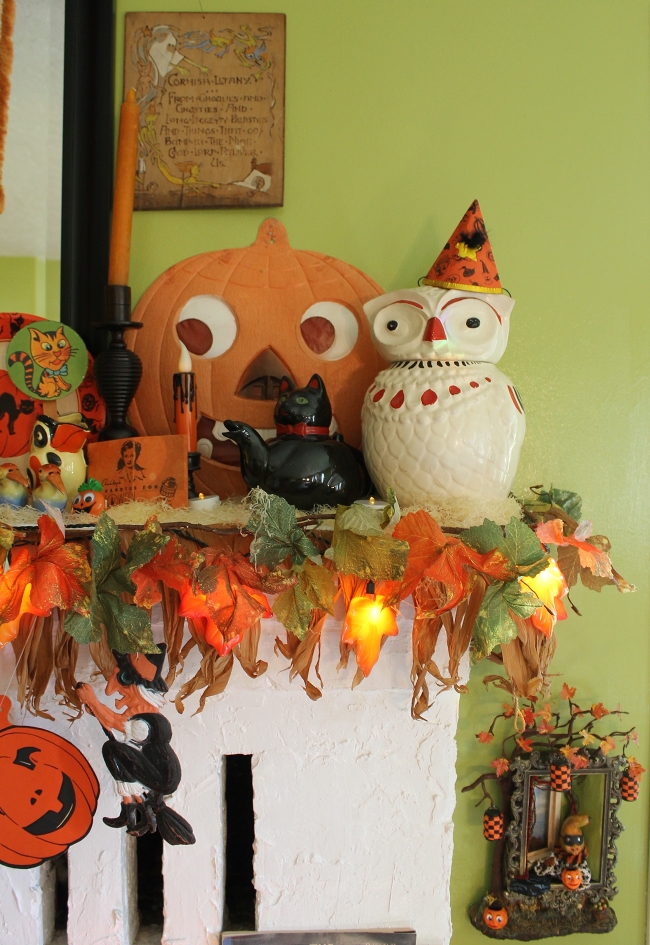 I plonked an old paper party hat on the owl cookie jar. He stands next to a black cat teapot. The orange piece of card stock with the woman's face on it has recipes for Hallowe'en candy on the reverse side. My friend Karen gifted me with the bird jug, are you noticing as I am just now, that a tea party theme is emerging.

The wooden plaque above the German pumpkin is a pyrography or wood burning picture of "Cornish Litany".

My sculpture "Ready to Party" is hanging on the wall down in the righthand corner. 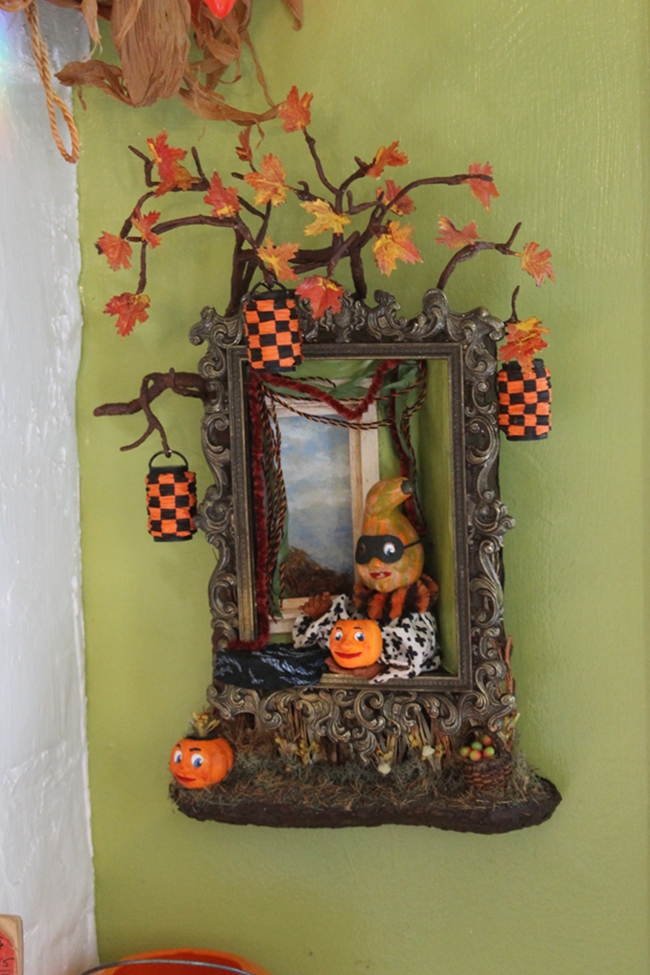 Here is a close-up of my sculpture "Ready to Party". It is available, go to this blog post for more information about it. 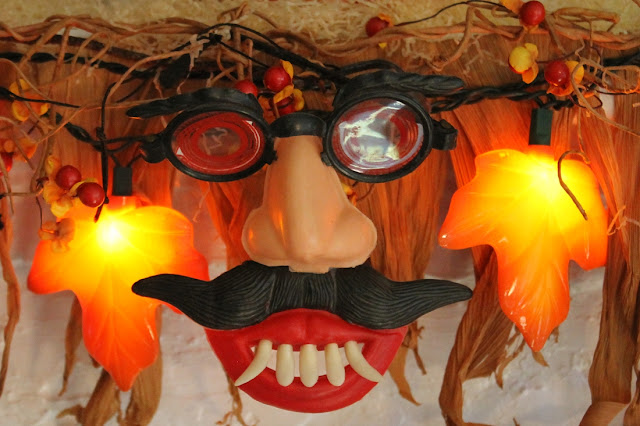 These plastic disguise glasses are from my youth, once I put them on absolutely no one recognized me! 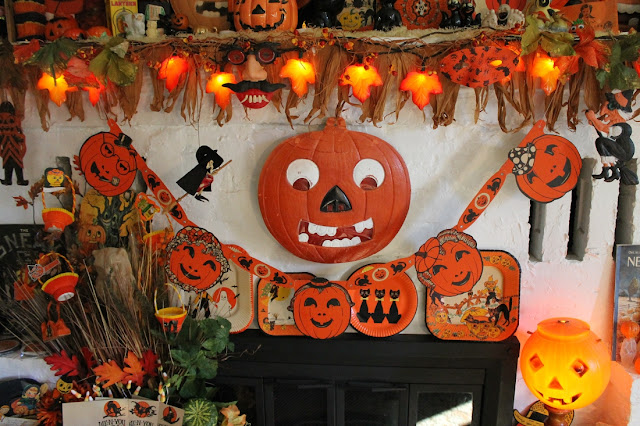 Below the mantle are more treats, that lovely big German J-O-L with orange glassine paper inserts in the eyes nose and mouth, the happy family look of the pumpkin garland, and four paper plates behind the garland. Hanging on the left is a felt and cloth made in Japan witch. 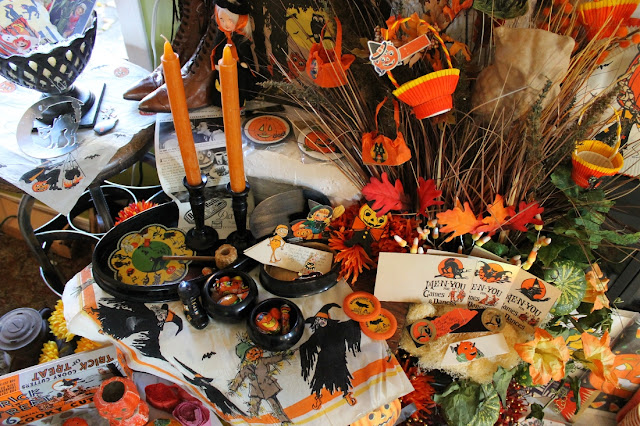 This vignette features an early crepe papier table cloth resting on the brown stool. The black ebony dresser set has been put use to display various goodies. The two small bowls are filled with candy, the lidded box has place cards and seals in it, while the large tray holds the two candle sticks, an early doily, a corn cob pipe and J-O-L stickpin.

There are party nut cups, invitations, coasters, two orange and yellow milk bottle caps with ravens on them scattered about. There is also a small cloth witch standing beside a pair of brown Victorian walking boots. 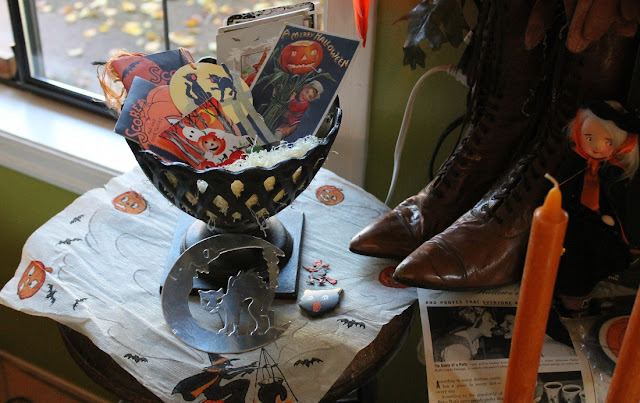 The cast iron bowl is filled with bridge tallies and postcards. It is standing on a crepe papier napkin. The silver cat and moon diecut Is most likely from a party hat. Beside it are some black cat stickers and a very tiny but detailed witch on a broom. 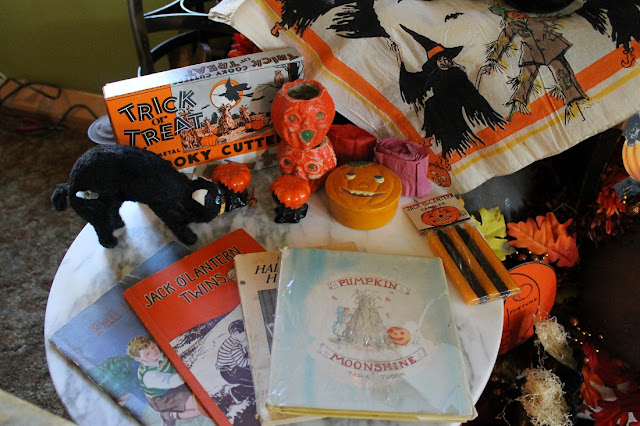 On the marble table are two children's readers, a book of party ideas for the Hallowe'en host or hostess, and a copy of Tasha Tudor's book, "Pumpkin Moonshine" that I purchased in the early 1960s.

The black cat is a wind-up toy. He chases a butterfly so other than being black and a cat those are the only qualities that allow him to be present with his comrades, they are quite forgiving.

The box of cookie cutters are reproductions bought in the late 1990s.

The ceramic pumpkin candy dish is Japanese and stays on my dresser year round, he is a favourite. 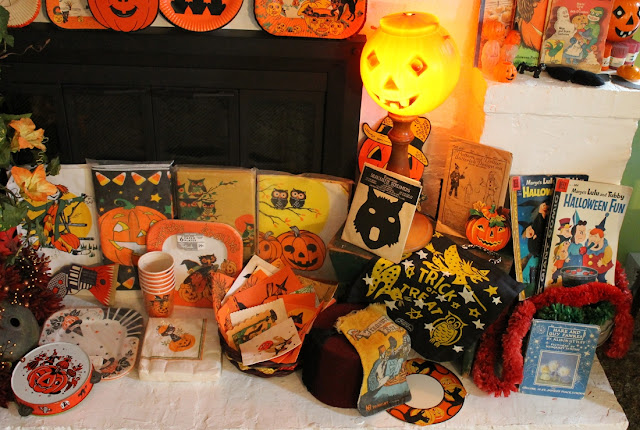 This view shows the hearth and its contents of paper table cloths, paper plates, and a brown vintage basket filled with paper napkins of different designs. There are pictures following with close-ups of the rest of the treasure trove. 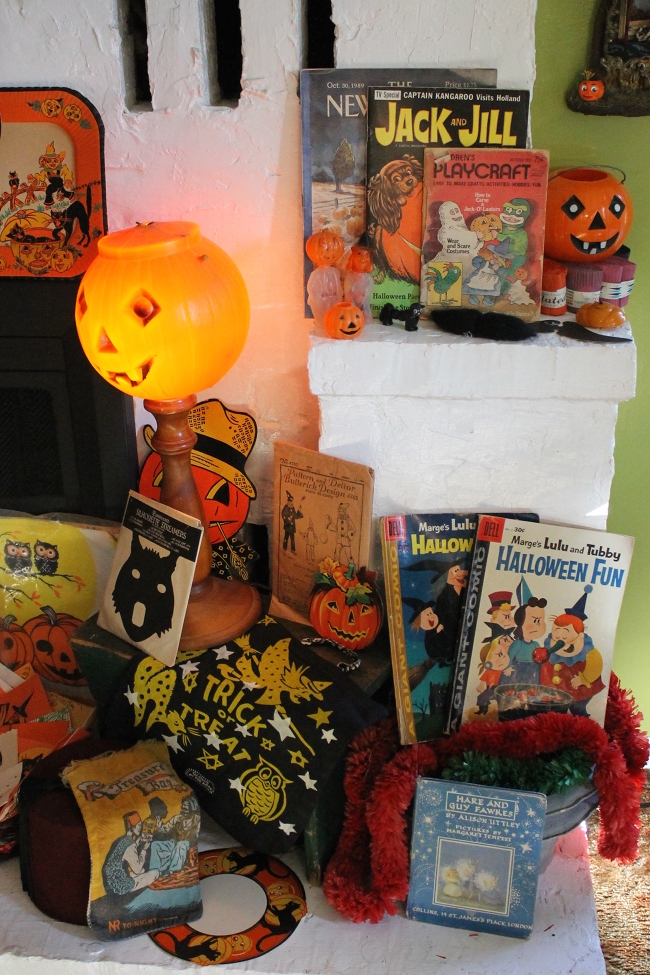 And here we are, a silk screened cloth trick or treat sack, another commercially printed cloth sack with exotic Egyptian pictures resting on a fez. The brown envelope in the back is a pattern for a clown costume dated 1919. 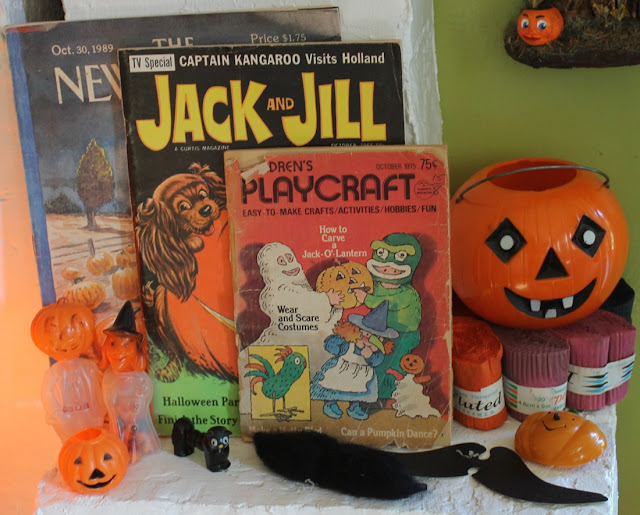 On the right mantle ledge in front of a New Yorker magazine and two children's magazines are some soft plastic candy containers, the witch still has some of her candy. The tiny black cat is made of wooden pieces held together with string. A vintage made in Japan mustache made of crepe hair used in theatre make up and two paper mustaches, all guaranteed to make one totally unrecognizable. The little pumpkin, once you push in his nose makes a very unscary wooing sound, and his eyes light up! 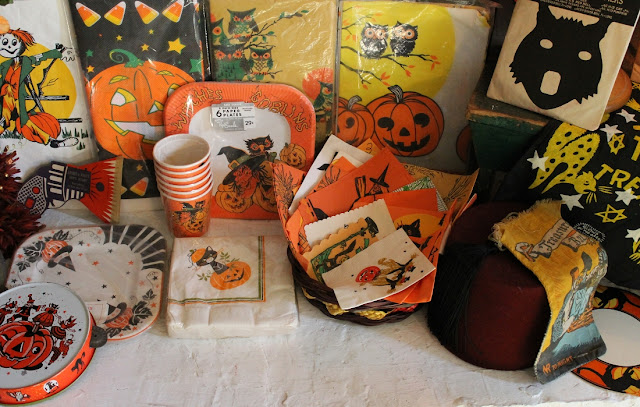 A closer look at the paper napkins and other tableware. The paper gun was an advertising give away from the Army and Navy Store. It is printed on card stock with a glassine paper insert attached inside. When it is brought down with a quick snap of the wrist the glassine paper shoots out with a loud snap. 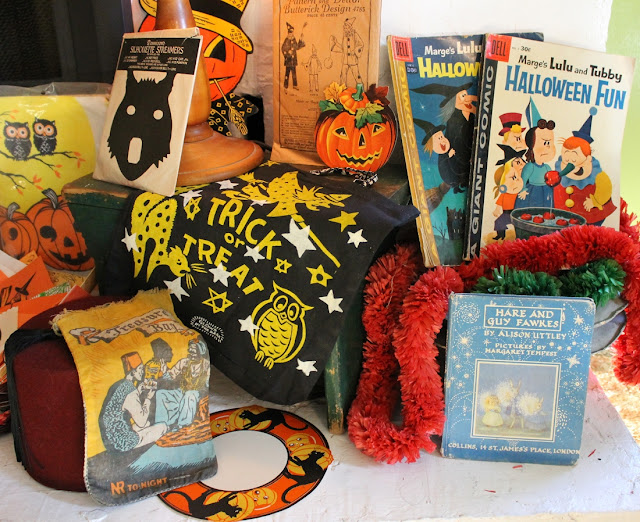 And finally a close-up of the right hand side of the hearth only to show my nod to Guy Fawkes Day, November 5th, with the English children's book by Alison Uttley, "Hare and Guy Fawkes".
Posted by Len at 10:27:00 PM

Wow, that's some cool stuff! What's that poster from?
Will post a link to your site on my Halloween blog. Too cool not to share.
http://halloween-tghoa.blogspot.com/