I am in the midst of getting my taxes organized, so I am a little tardy in getting any new work done as well as putting new posts together. Here is the last batch of magic posters from the Library of Congress. 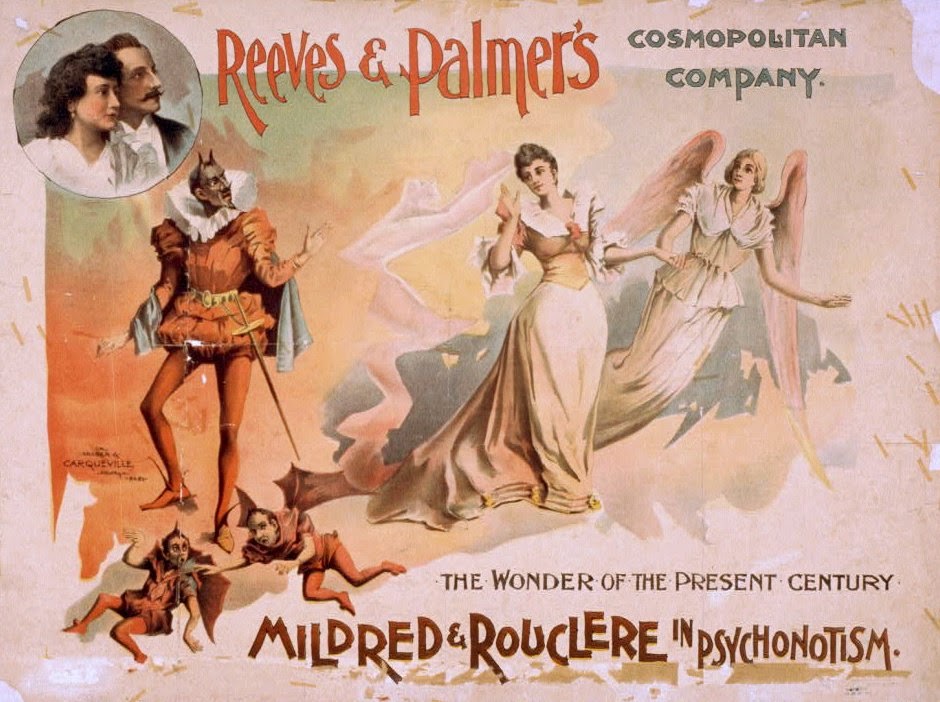 Psychonotism is the ability to transfer thoughts back and forth without speaking. Star Trek aliens could do this as well! 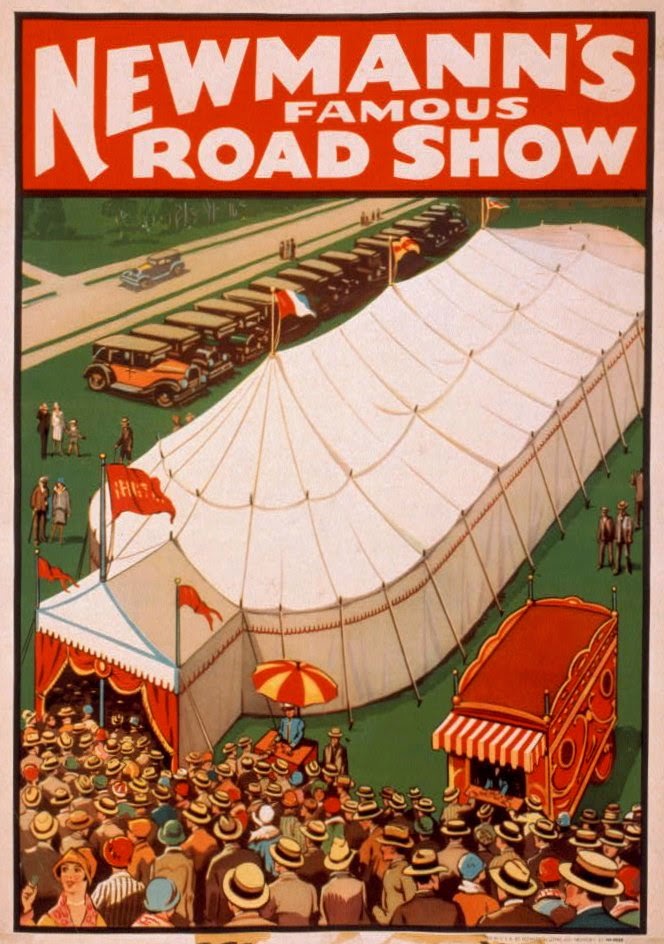 I find this poster quite interesting, usually you think of a travelling circus in a tent not a magic show. This is the era of barn storming, taking the show to the people. This elegant stock poster is for a mind reading act. There seem to be many more women mind readers than men and few women magicians. I'm not sure what the reason for this would be. 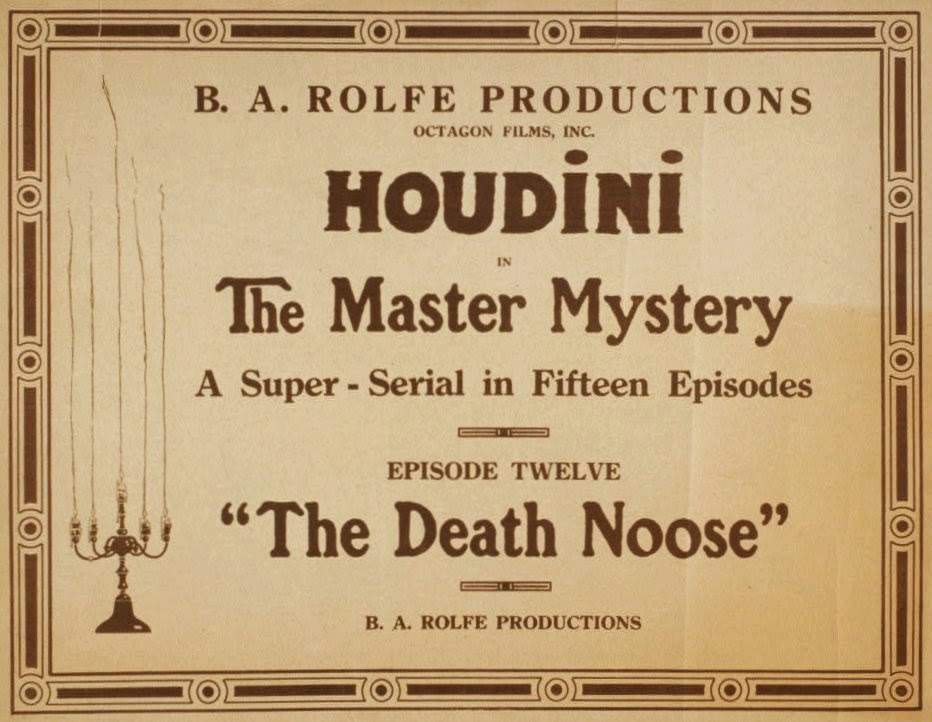 Harry Houdini tried his hand at making films. They weren't to successful because people didn't believe that what was on the screen was real but his escapes were incorporated  into the storyline. 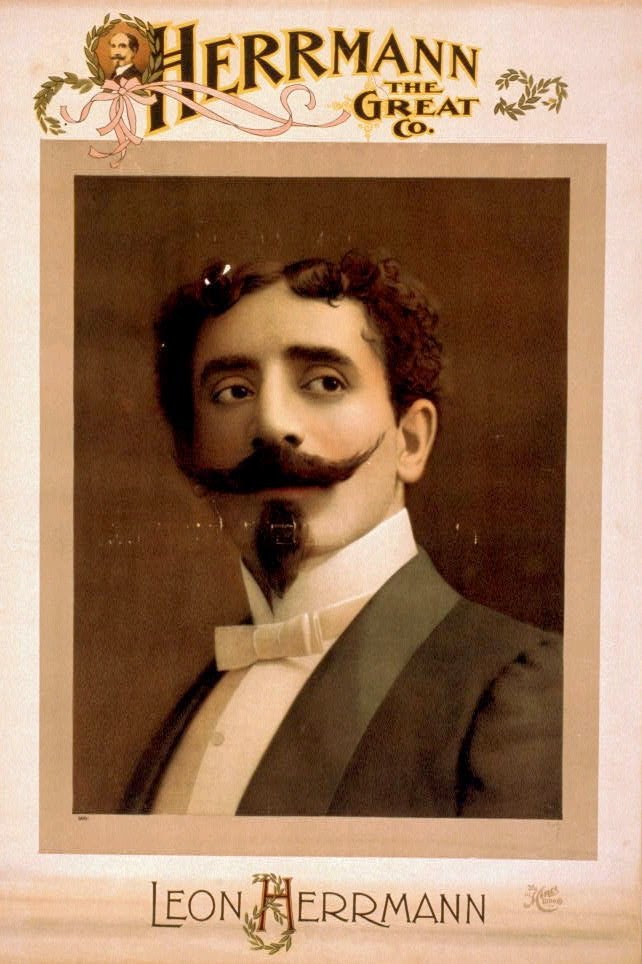 Leon Herrmann, considered the best magician of his time, definitely cultivated the look of the mysterious magician. 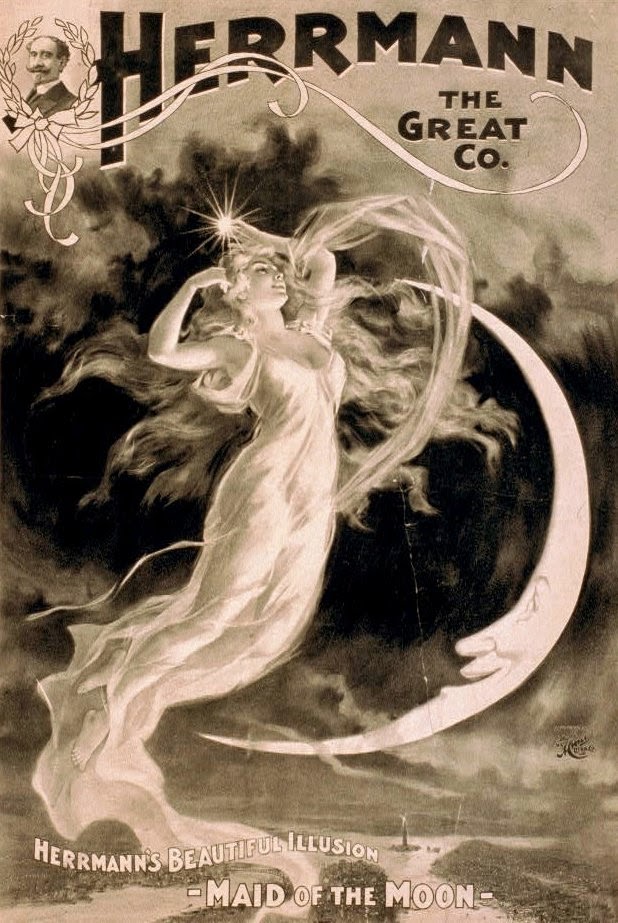 It would be interesting to know what the illusion was about. Below the Art Nouveau illustration of the woman and the moon the poster states "Herrmann's Beautiful Illusion - Maid of the Moon". 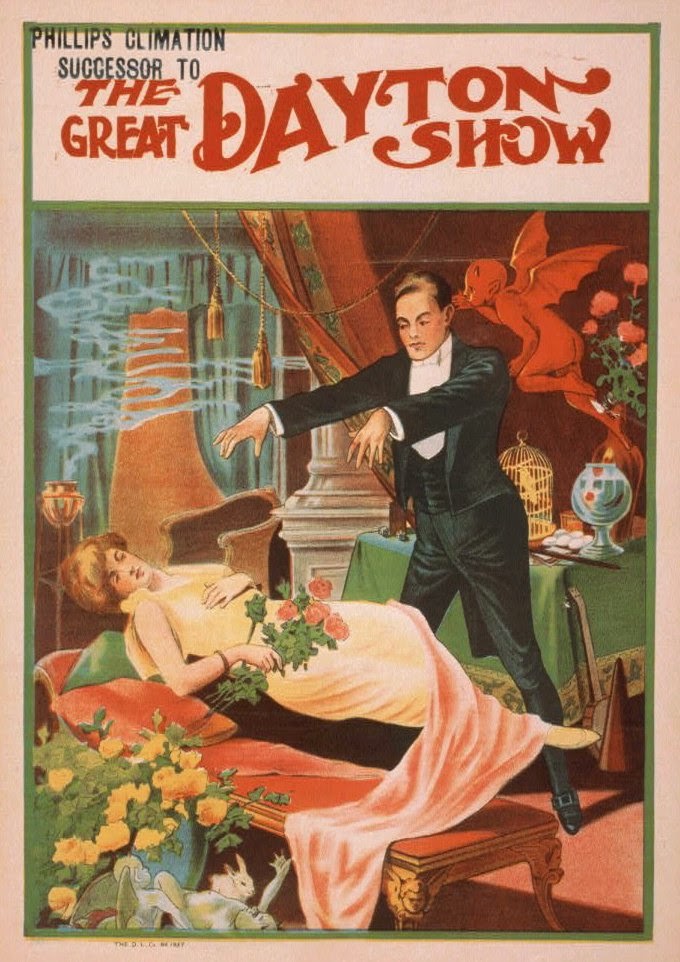 Levitation has progressed over the years from an illusion presented indoors on the theatre stage to Chris Angel outdoors floating from one building to the other. 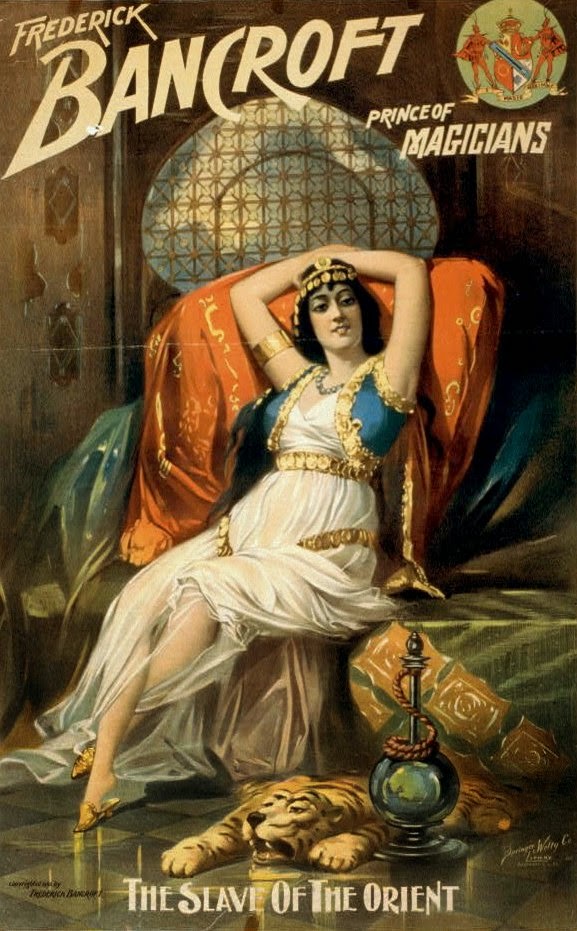 Orientalism or the depiction of the "Far East" by Western writers, designers and artists was very popular in the Victorian era. This last group of posters shows the influence of the Orient, that mysterious and exotic land, had on the shows of that time. This "Frederick Bancroft- Prince of Magicians" poster depicting "The Slave of the Orient" is a wonderful example. 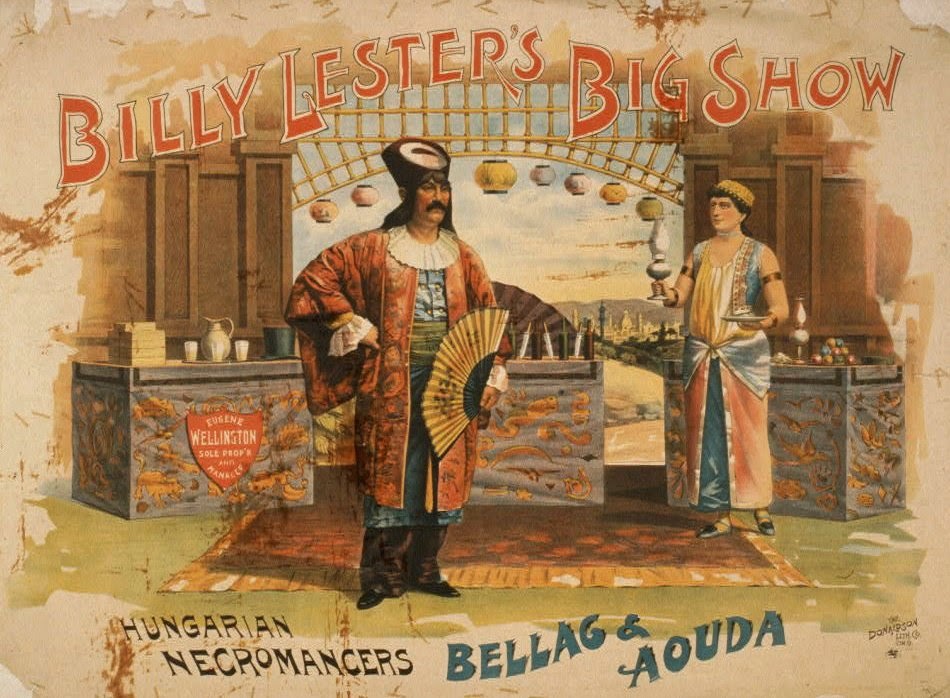 On this poster "Billie Lister's Big Show" had the "Hungarian Necromancers - Bellag and Aouda" appearing in oriental costume. They look so out of place in oriental clothing. I would loved to have seen them in traditional Hungarian costume with them being true to their background but this is show business. 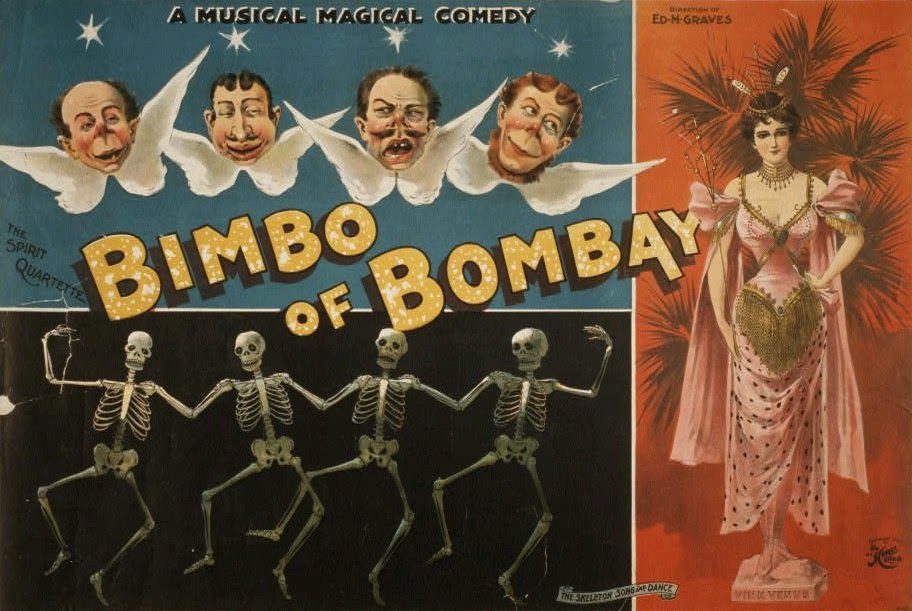 This poster doesn't show oriental influence other than in the title "Bimbo of Bombay, a Musical, Magical Comedy". 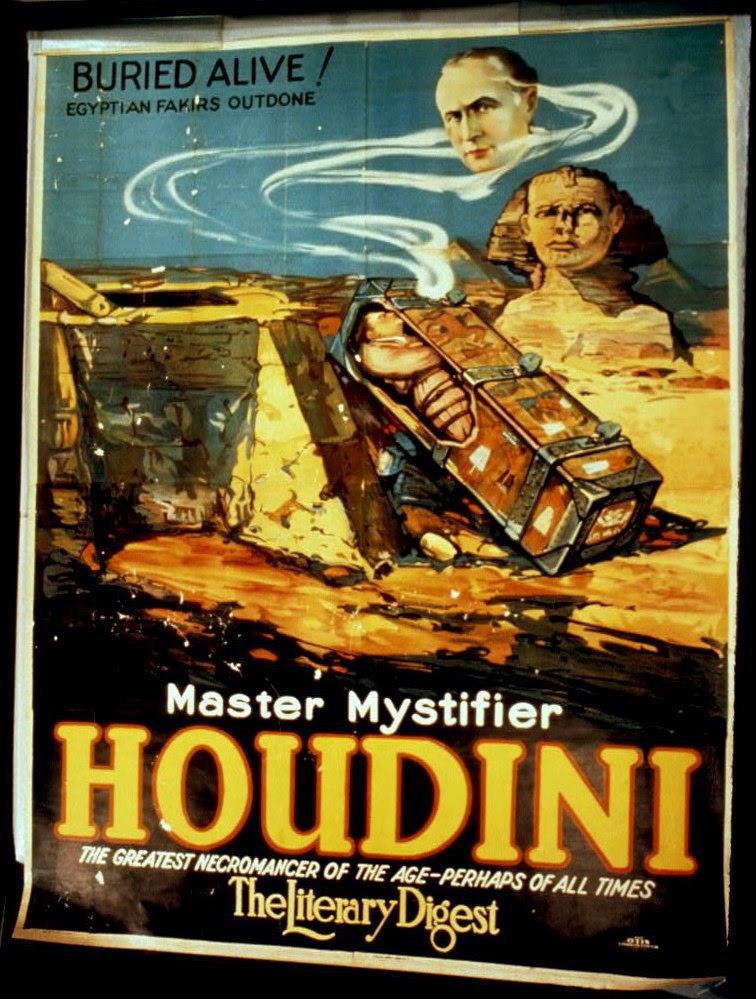 Harry Houdini was a master at escaping from anything; handcuffs, being suspended upside down from a burning rope in a straight jacket, or a prison cell. He is legendary. This poster depicts him being buried alive, unfortunately he died before this illusion could be presented. 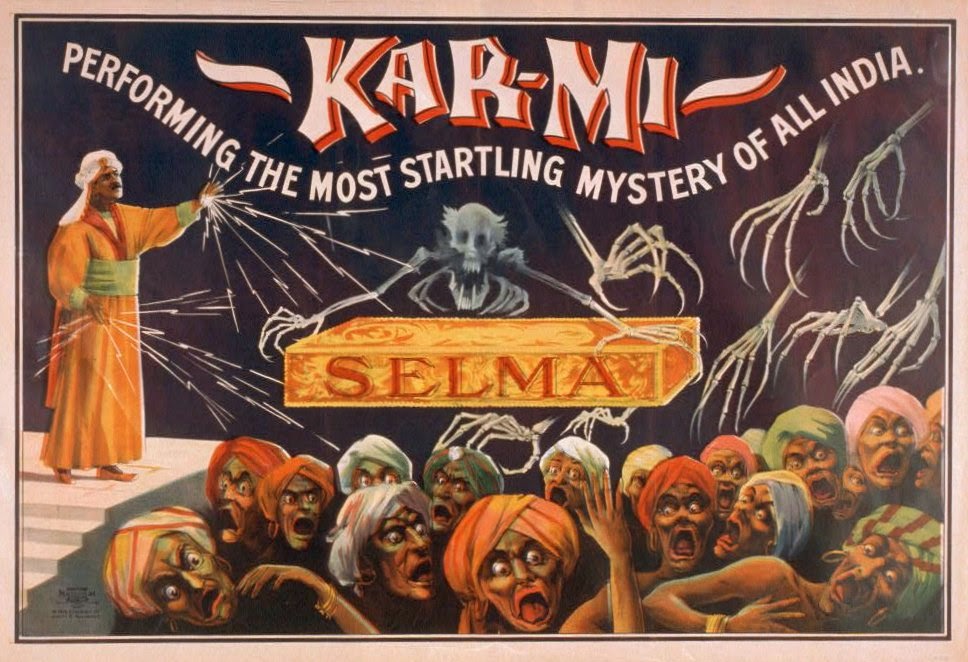 I have no idea what this illusion is but the magician Kar-Mi (Joseph Hallworth) is depicted as a real human being of great power and his audience is a caricature of silly Indian fools. 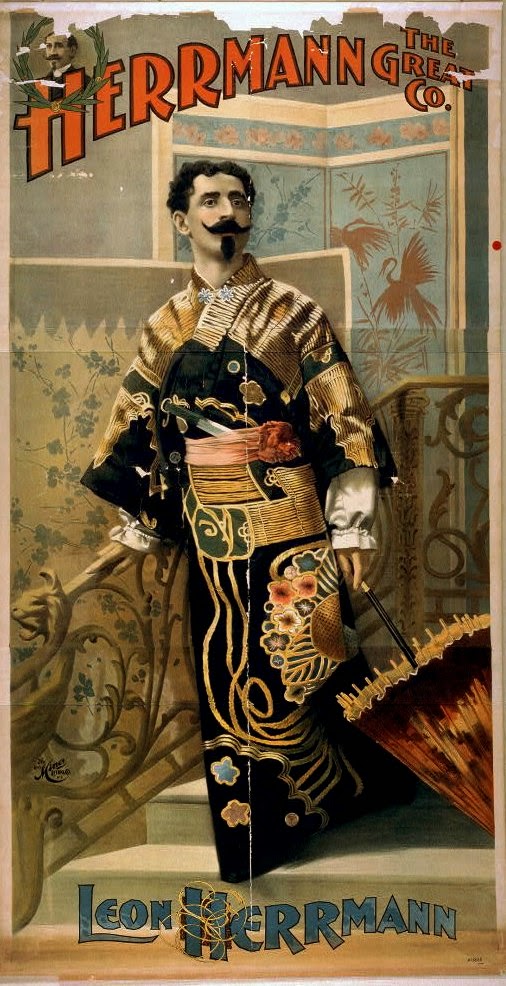 This last poster shows Leon Herrmann in Japanese costume. The stage setting and props must have been spectacular.

I must get back to my taxes but while I am doing that do check out the EHAG Emporium, there are still some wonderful pieces to add to your collection.
Posted by Len at 12:29:00 PM

Email ThisBlogThis!Share to TwitterShare to FacebookShare to Pinterest
Labels: a little tour of my brain, Orientalism, Stage Magicians

A belated welcome to EHAG! :-)

Thank-you, I'm glad you enjoyed the post and my blog. I like pictures of all kinds of things, they get the creative juices flowing, and if others get inspired by what I post then my mission has been successful.