I was originally going to do a post about exotic costumes and Oriental magicians but I realized that there was more than that to show you. 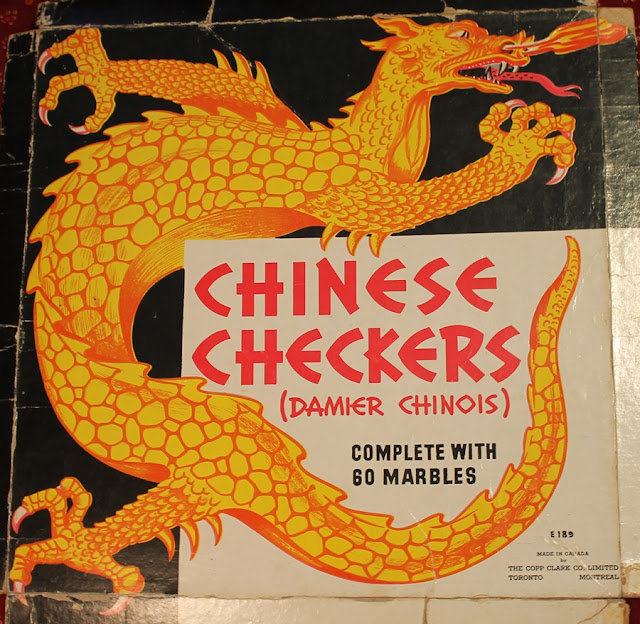 I have a feeling that my fascination with exotic Oriental costumes and props may have started with this Chinese Checkers game. Yes, it is the same game that I had as a child albeit in a very tattered condition. This may be from the late 1950's but is more likely early 1960's, I couldn't find a date on the box. 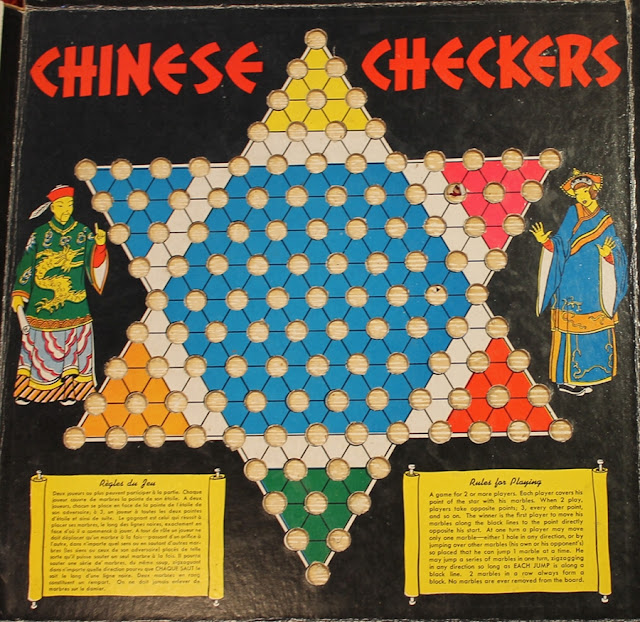 This is the inside of the box. The man looks Chinese, at least a lot more Chinese than the young woman! From these graphics I went on to an interest in Chinese and Japanese art. My work now is probably more like the Chinese Checkers box, quasi Oriental, than what I had an avid fascination with in my early youth and art school days.


One of the ideas that I have had for a sculpture was of the famous levitating lady. This poster showing Kellar performing the levitation illusion is beautifully designed. I love the assistants costume. 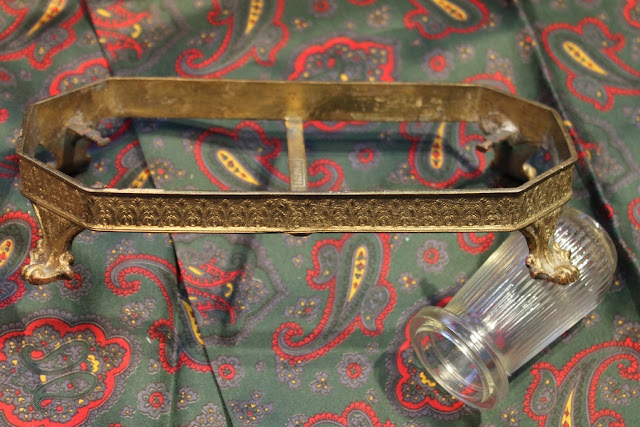 I have had this metal base for a while now. I purchased it at one of my favourite shops "General Salvage". Check this post out to see what the place looks like.

I was going to make a chaise longue with it but after having it around for a while with no other idea than that, well let's say it didn't flip my switch. I much prefer turning it into a lounge for the lovely assistant to have been reclining on as she levitates above it.

I picked up that glass condiment jar a couple of days ago. I have another one they may have been mustard pots.


What more could you want; exotic arches with tiled walls, hanging lamps and censers, palm trees, exotically dressed courtesans, and Nubian attendants fanning the air. This is eye candy to the max and is seldom seen on the stage any more. 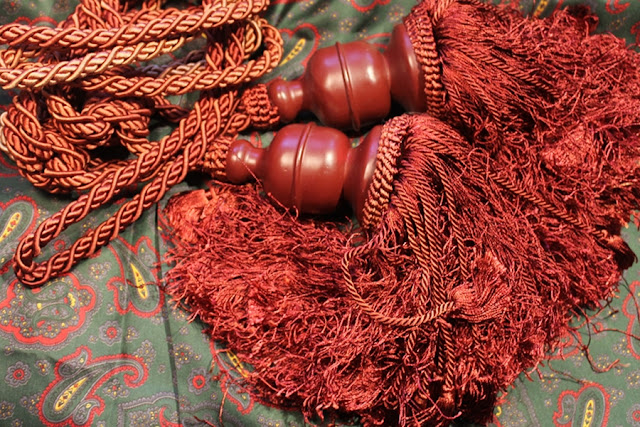 I picked up these faded curtain tiebacks last year at Sally Ann for under $5.00. They will be taken apart and used for costumes as well as for gathering mini curtains into ARTISTIC DRAPING! I thought I would get a little dramatic and use some flourish, I don't want this to be a list of the ideas and uses for the goodies! Have you ever felt that the exclamation mark is underused? 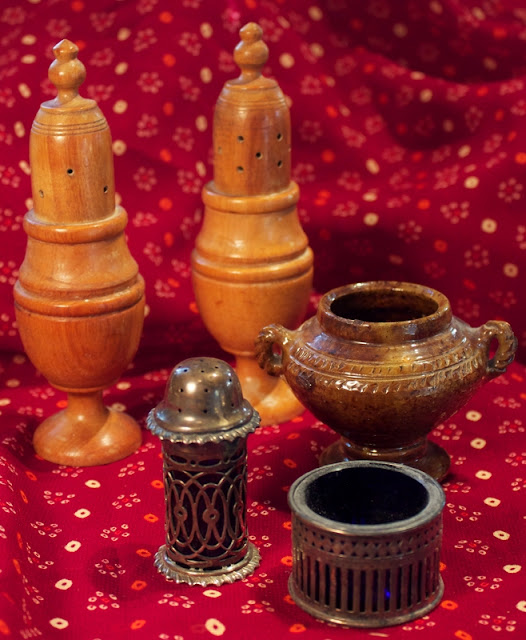 I did mention in a previous blog post that I will be making a flying carpet with one of the small carpets that I purchased from Salvation Army. Here is a better look at three of the items that will be on the carpet. I will be using the wooden salt cellar with the three rows of holes, the ceramic urn, and the silver and blue glass salt shaker.

I almost didn't buy those wooden salt and pepper shakers because at about 5" they are quite tall for my sculptures. The silver and blue glass pieces were missing the rest of the set so they were inexpensive. I like the tarnished look of old silver. In this sculpture "Decorating for the Costume Ball" Chuck is wearing a brown Japanese kimono of hand dyed silk under his colourful fringed robe. They are each carrying a handmade Japanese style paper lantern. I am not sure why but it was appropriate for Chuck to be wearing an Oriental inspired costume. 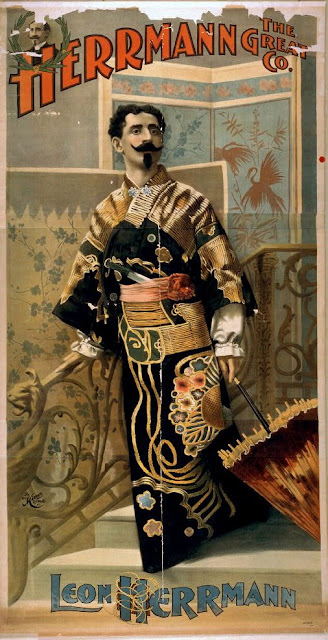 Even though The Great Leon Herrmann does look out of place in these exotic robes it is quite wonderful. I would have loved to seen the show. 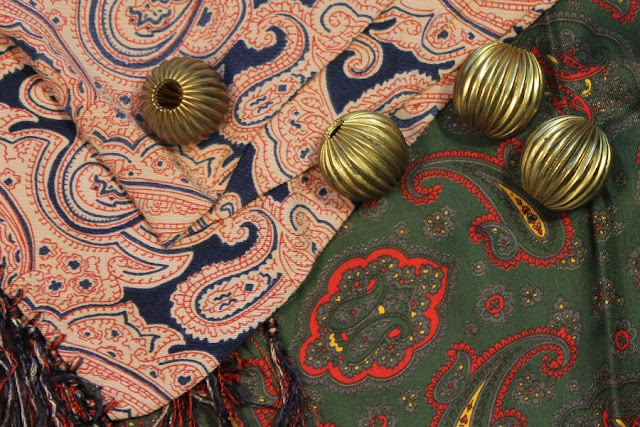 I buy 1940's men's scarves whenever I can find them, sadly they are getting scarcer as the years pass. The designs range from plaids and stripes to paisleys and anything in between.

I pick up interesting beads, necklaces, and bracelets whenever I find them, who knows how I will use them. These four beads were part of two candle holders. 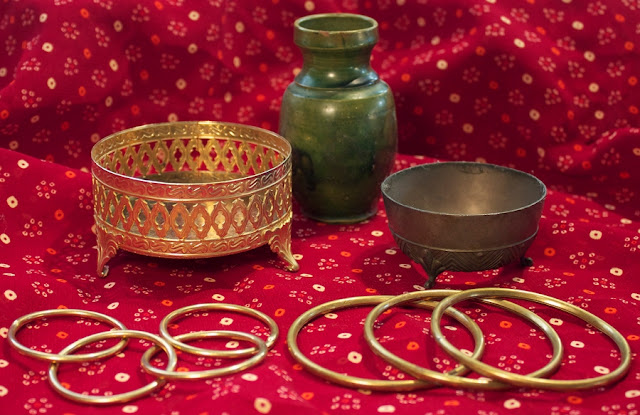 I love that colour of green on the ceramic urn, there is even a small chip in the lip that happened who knows when but the patina speaks of a bit of history.

The two footed items may be used for footstools or the base for an illusion. Farther down is a better picture of the pewter base, the design on it is an interesting zigzag Art Deco pattern.

A set of four linked brass rings will be used in a version of the Chinese Linking Rings. The other rings are hollow brass coloured bracelets, maybe two used as a pair of giant spectacles or they may be passed over  a floating object to prove that no strings are used, I'm not certain yet. 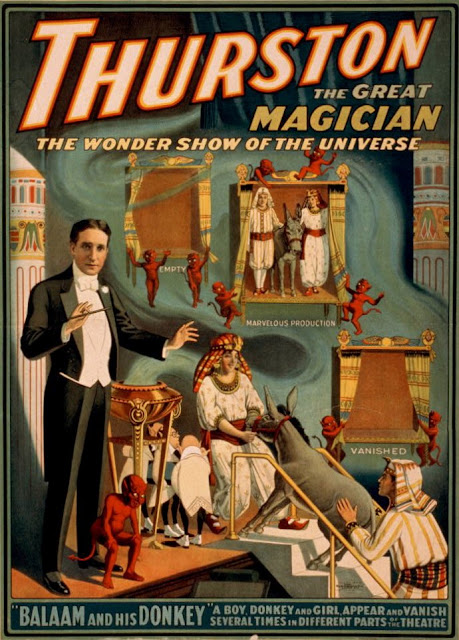 The discovery of King Tut's tomb inspired the costuming, sets, and props for this illusion. I like that incense burner standing beside Thurston. 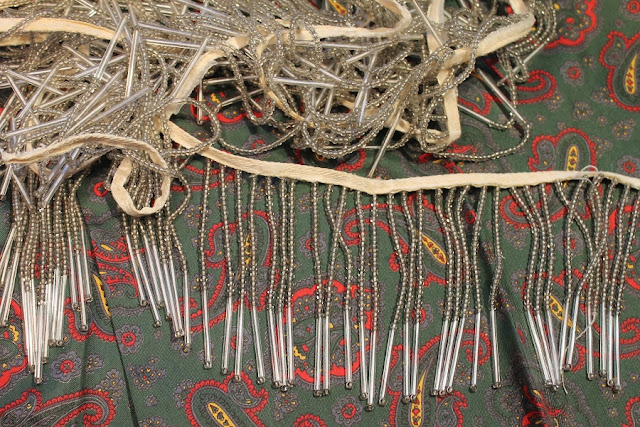 Last year in December I picked up an interesting lampshade with glass bead fringe, most of the bead fringe used on lamps now is plastic. I stripped the shade of its glass bead fringe and damaged fabric covering. The shades wire frame is being covered with beads and will be a gift for our middle son and his wife. The glass bead fringe I will use for curtains or costumes.

There is much history around this particular illusion. There are stage productions featuring this illusion but from what I can understand is that it has never been performed outside as was first related by a traveller to India several centuries ago.

The illusion starts with the magician and a young boy assistant coming on stage. The rope is tossed into the air becoming rigid. The young boy climbs the rope and disappears. There is a sound of fighting and the boys limbs and torso are tossed down from where the boy disappeared. The magician places them in the basket and then the young assistant steps out of the basket restored whole. Needless to say my version of the Indian Rope Trick will end with the lad on the rope as in the poster above. 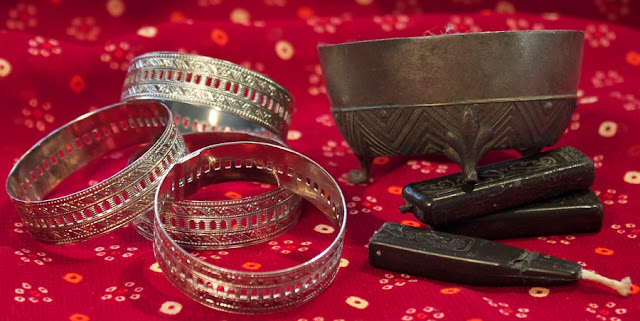 Here is a side view of that pewter base that I showed you earlier, it is quite interesting. The angular design is very Art Deco, it could be from the 1920's or early 1930's. I have it propped up on some sealing wax that is from the 1940's. I use the ceiling wax to seal small bottles of "chemicals"; coloured sand works beautifully for this.

The four metal napkin rings will be used at the top and bottom ends of cylinders for producing silk handkerchiefs, flowers, or even a beautiful assistant.
All of the antique posters that are in this post were featured along with many others in these four blog posts:

A Little Tour of My Brain, Part 14 - Stage Magicians, Kellar

If you haven't checked out my Etsy shop please do have a look. I will be adding more items in the near future.
Posted by Len at 5:38:00 AM