A Little Tour of My Brain, Part 1- Fireworks

It is over a week and I haven't let you know how the ornaments are coming along. I have been very busy with the little guys. I am going to give you a little tour of my brain and the things that influence the finished pieces. So here goes with part 1 - Fireworks. 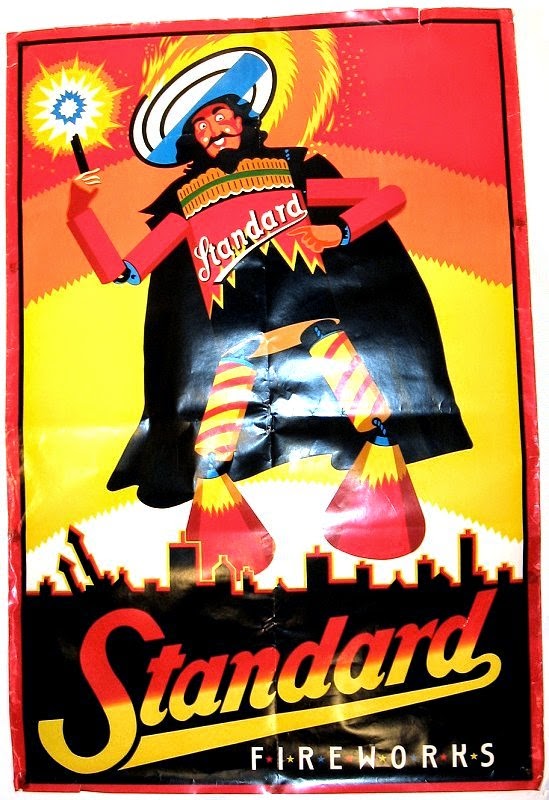 This is a very distorted photograph of a poster in my studio. It is about 3' high so I guess that is why the photograph came out distorted. This Standard Fireworks poster was on the wall of a place that sold fireworks. They were kind enough to give it me when I asked for it. Standard Fireworks is a British company. 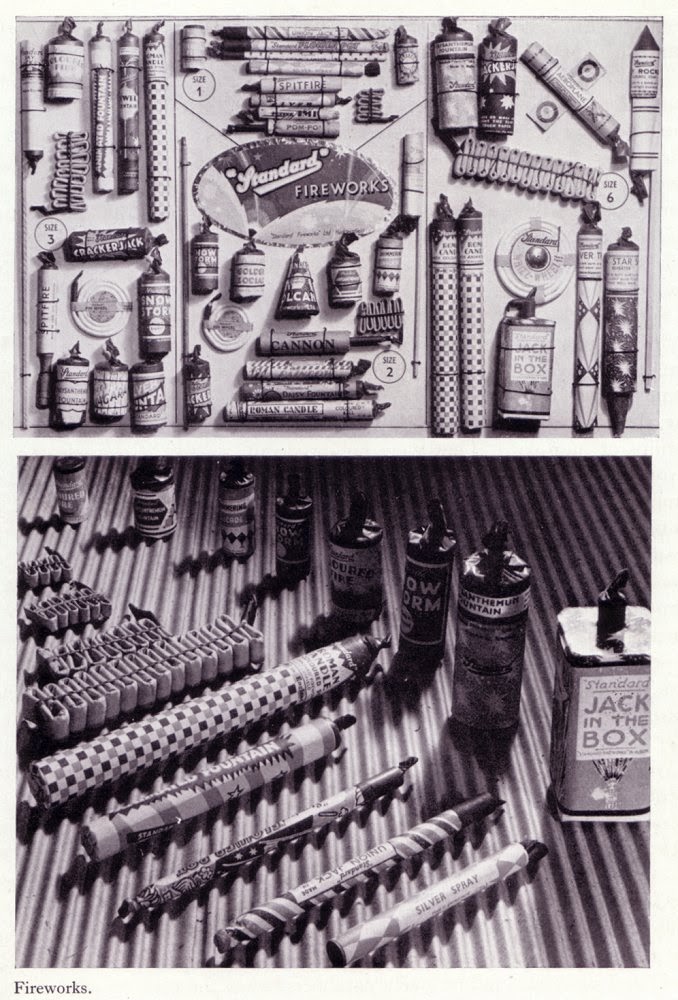 I love the fireworks graphics. The older items tend to be more interesting. These photographs are from a British book "The Unsophisticated Arts" published in 1951. Sadly the graphics on most of the new fireworks are poorly designed. 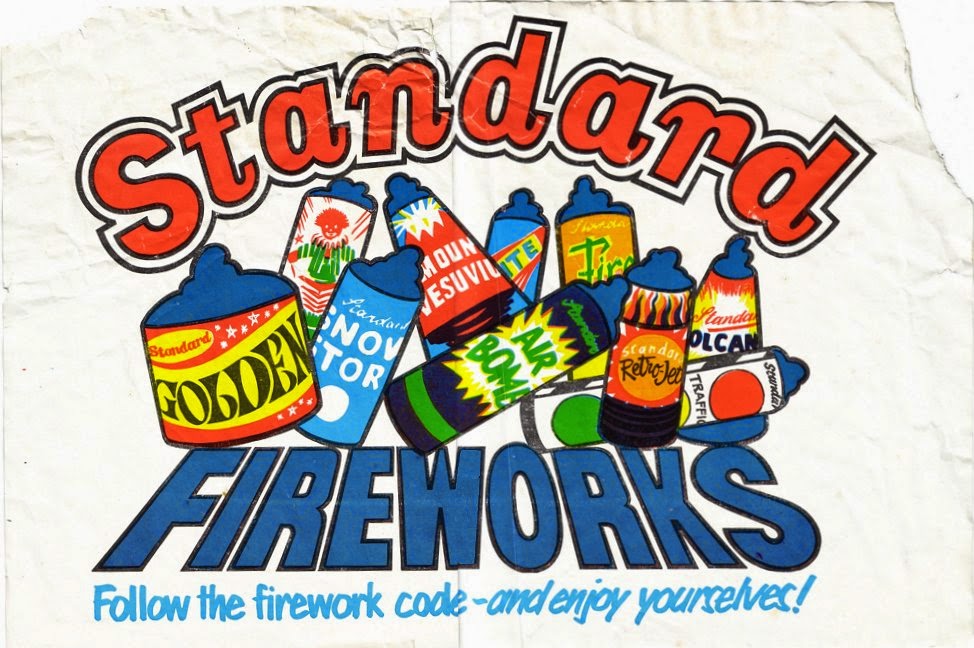 My wife and I went down to the Inner Harbour for the Canada Day fireworks display. They were fantastic. Fireworks can be bought in Toronto for Canada Day, but not in B.C. I don't know if they are available anywhere else in Canada for our nations birthday. Let me know I'm curious. 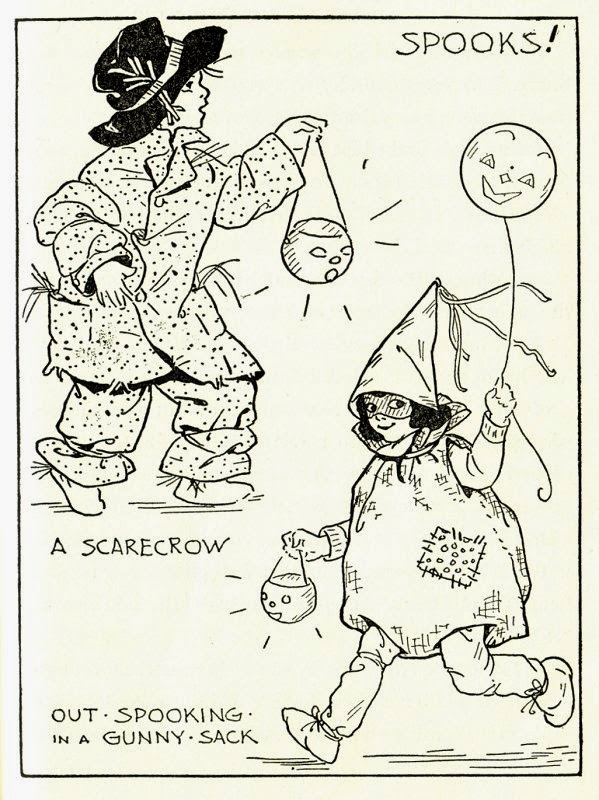 Fireworks are sold in southern B.C. at Hallowe'en. This is the only time that fireworks are sold. The ink drawings above are from a 1966 reprint of a 1938 book "Holiday Handicrafts" by Nina R. Jordan.

British Columbia was very British in the beginning. That is a dumb statement otherwise it would have been called "Something Else Columbia". Anyway they greatly influenced the way holidays were celebrated. 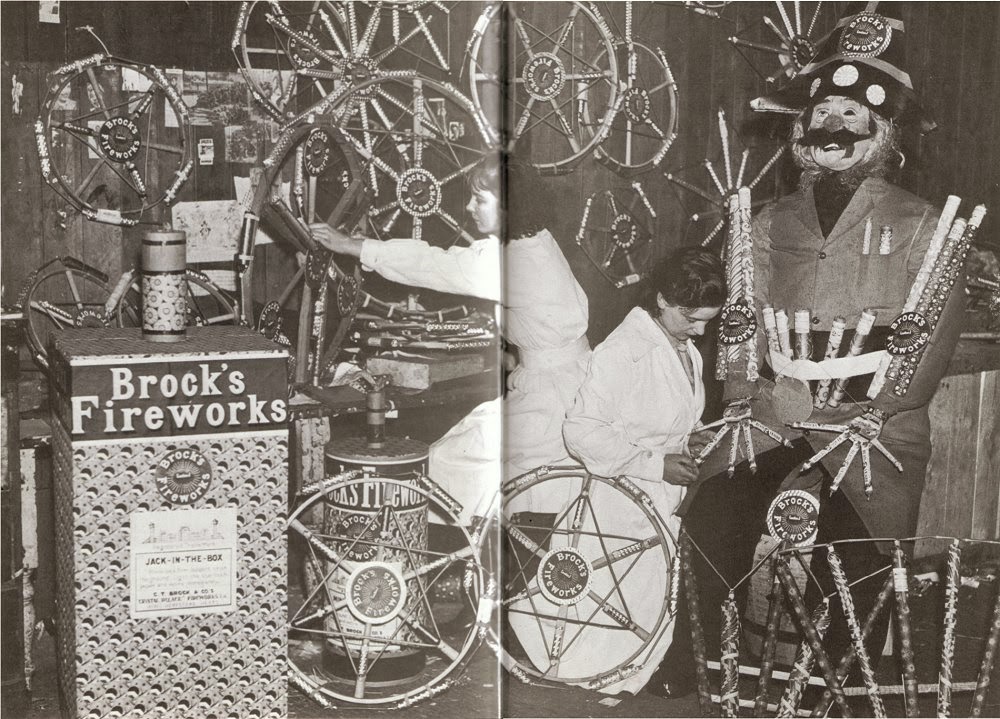 Hallowe'en was influenced by Guy Fawkes Day. For those of you that don't know about Guy Fawkes and his dastardly deed of trying to blow up the houses of parliament well now you know. November 5th is "Guy Fawkes Day". 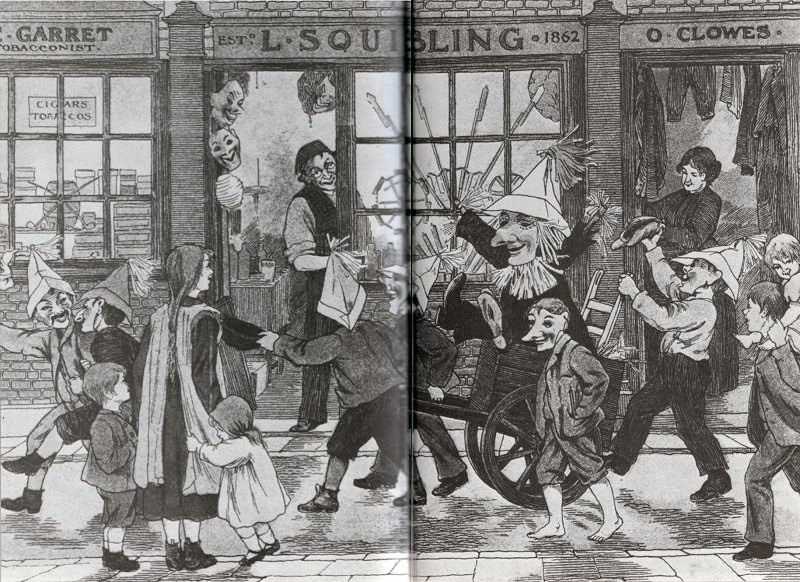 All good Brits construct a "guy", think scarecrow, stuff fireworks into his clothes pop him on a huge pile of wood and set the whole lot ablaze. All of this is done to celebrate the fact that he was caught, his plot foiled and then executed for treason. He wasn't burned at the stake but hung. If someone knows why the bonfire started let me know. I am definitely rambling. Guy Fawkes Day I think is the reason that we have fireworks on Hallowe'en. 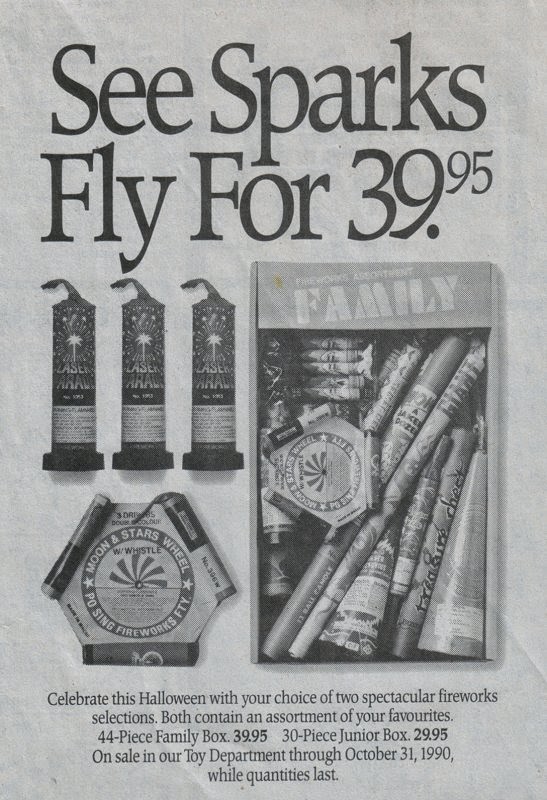 I cut this ad from the 1990 Times/Colonist. I don't know of anywhere else that has fireworks on Hallowe'en but I am that glad we do.

President Fireworks shown in all of their glittering frenzied glory to be used with caution. 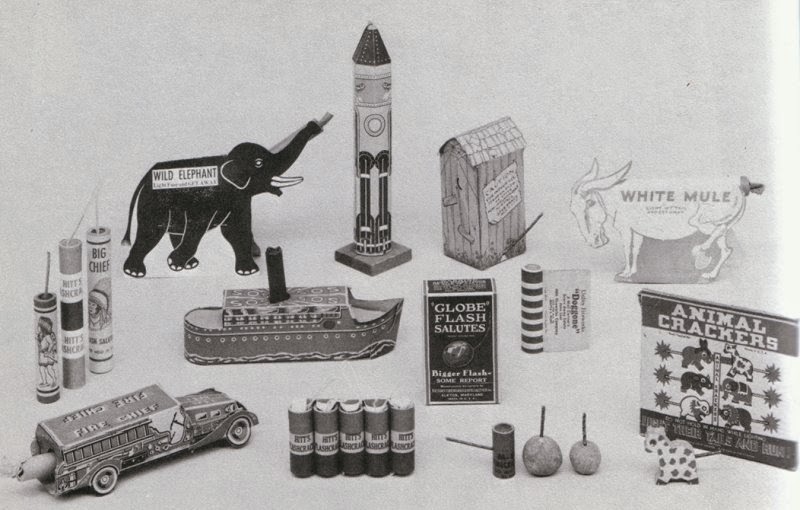 This photograph of novelty fireworks is from George Plimton's book "Fireworks a History and Celebration" published in 1984 by Doubleday. 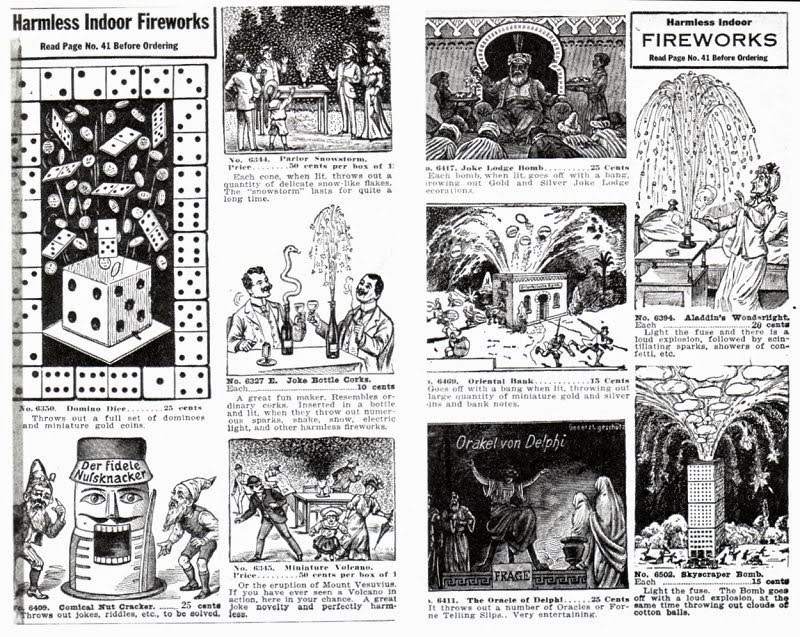 This image is also from George Plimton's book. It shows various indoor fireworks and party bombs that shoot out trinkets for the guests. When I was in London years ago the Christmas dinner that I was at had Christmas crackers with miniature fireworks in them. There was a tiny fountain that shot sparks about 5" in the air and a roman candle that shot one tiny ball of fire about 3 ' into the air. They were wonderful. 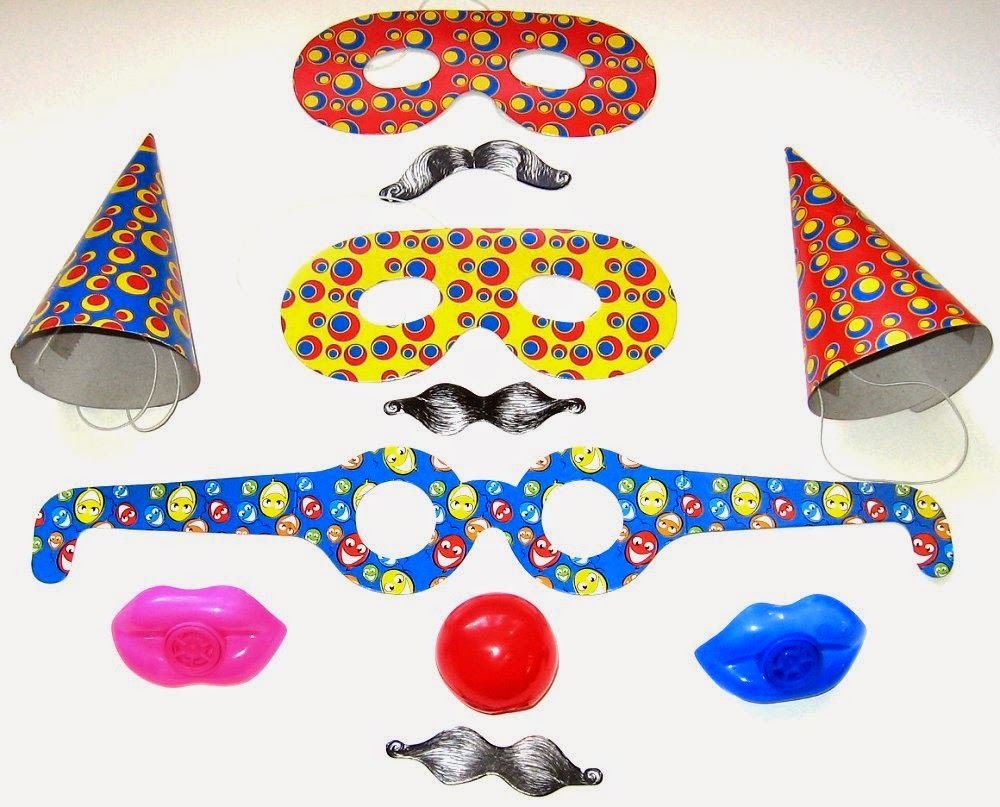 When we were in Switzerland indoor "Party bombs" were available everywhere. They came at various price ranges. You could also buy them in undecorated brown cardboard ready to decorate to your own personal party theme. There is a wick at the bottom that is lit and the contents shoot out the top for everyone to gather. There was no real explosion unfortunately. The contents of our bomb consisted of thin card mustaches, red plastic clown noses, red lips that had a siren/whistle in them to blow, and conical party hats.


This preamble was just to explain why two of the candy container ornaments are holding fireworks.
Posted by Len at 8:00:00 PM