A Little Tour of My Brain, Part - 9 - Country Fairs, Metchosin Days, and the J-O-Lity Fair

I love fall fairs. Most of the fairs that are around are very big and very commercial not that a fall fair isn't about business it is. Maybe what I like about a fall fair is nostalgia. There is a large fair in Saanich that we used to go to before it moved to bigger and better premises. We haven't been since it moved to its new location. I would like to see it but we never get around to it. One reason that we may not go there is this wonderful small fair in Metchosin called Metchosin Days and it is free. It takes place on the first Sunday after Labour Day. 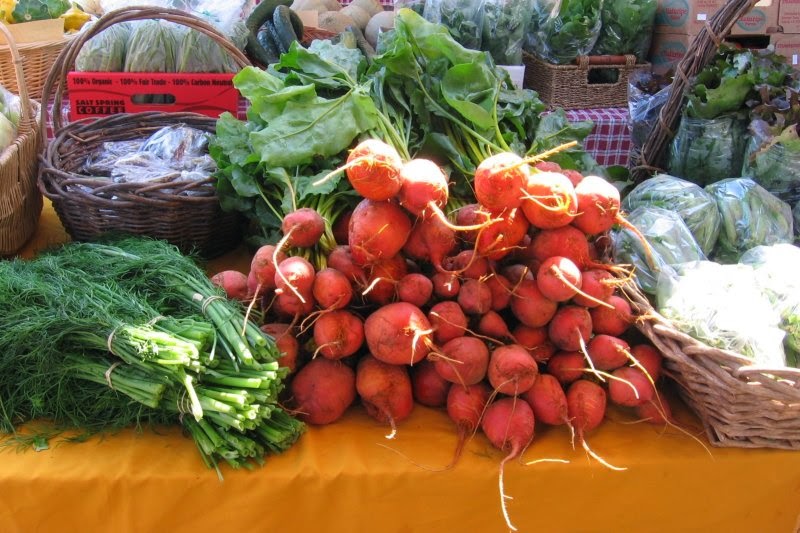 There are lots of farmers selling local produce displayed in beautiful mounds on the tables and piled high in baskets. 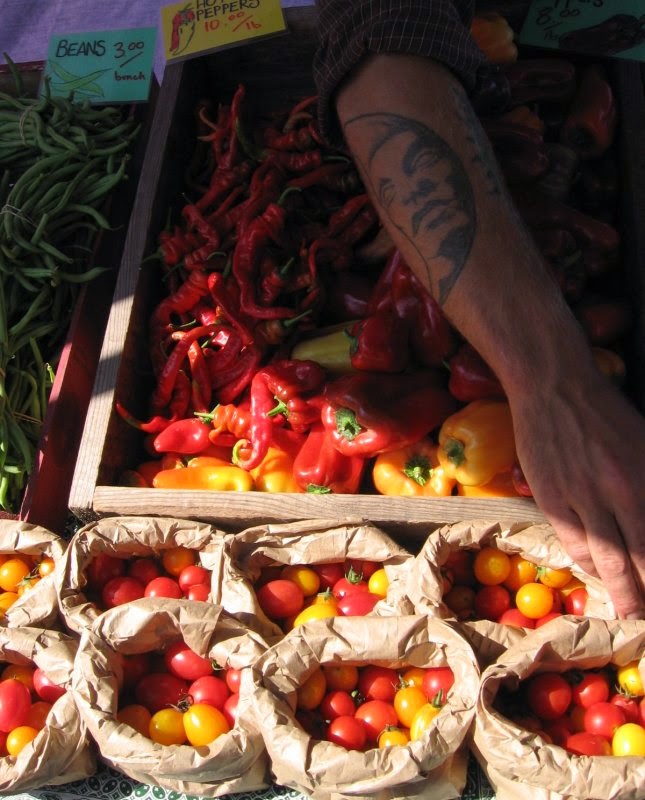 Yellow and red tomatoes simply presented in brown paper bags in front of a wooden box filled with yellow and red peppers of all sizes, shapes and heat intensities. 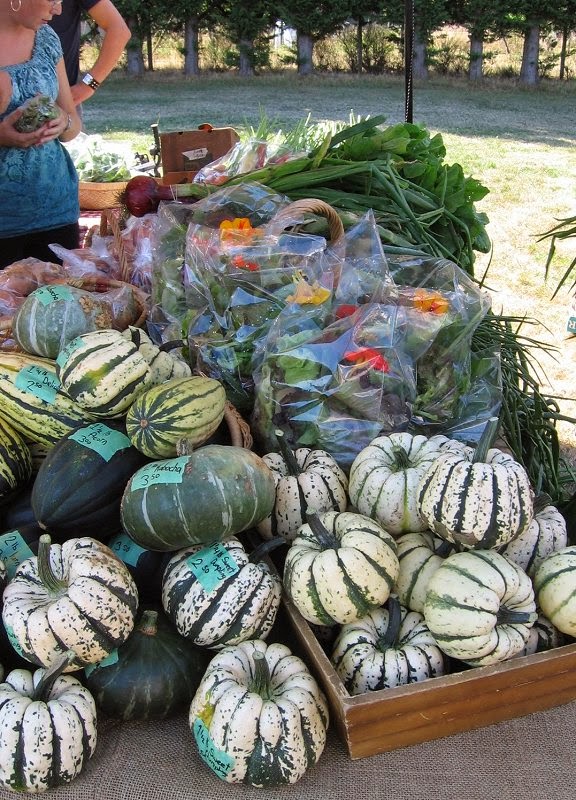 There bags of salad greens and edible flowers. Every sort of squash imaginable is available. 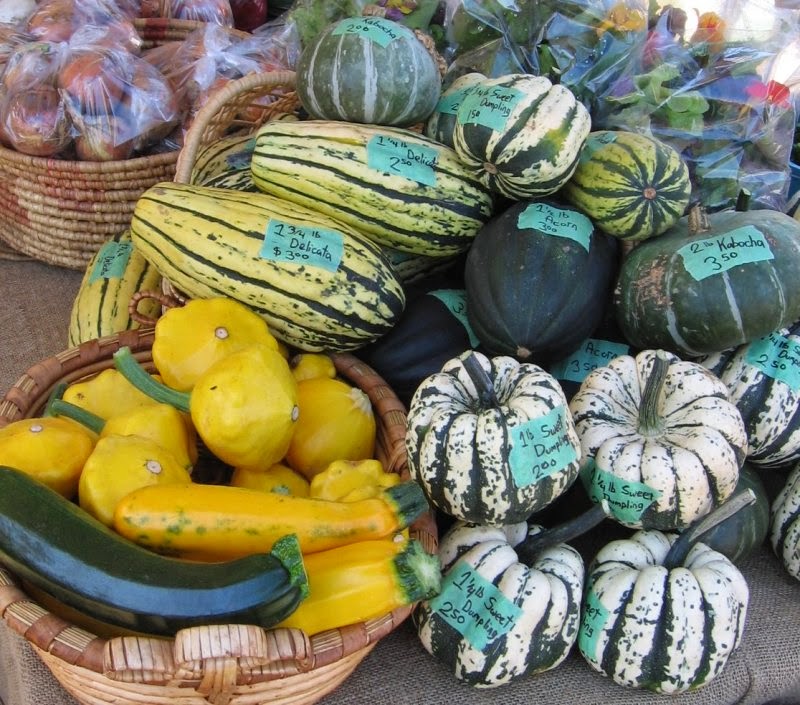 I love squash, gourds, and pumpkins, as you know. The colours and shapes are so beautiful and they taste great as well. 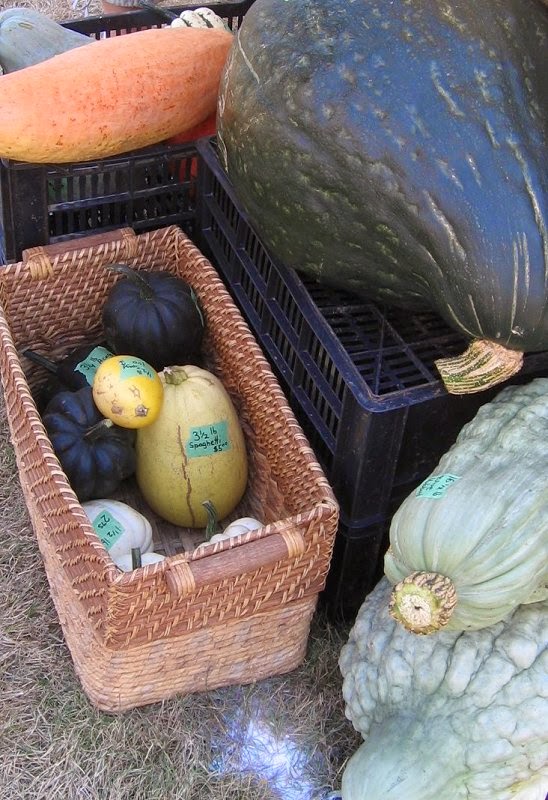 There are even squash so large that it will take several people or one very strong person to carry it around the fair for the day showing it off like a giant Kewpy doll for all to see. 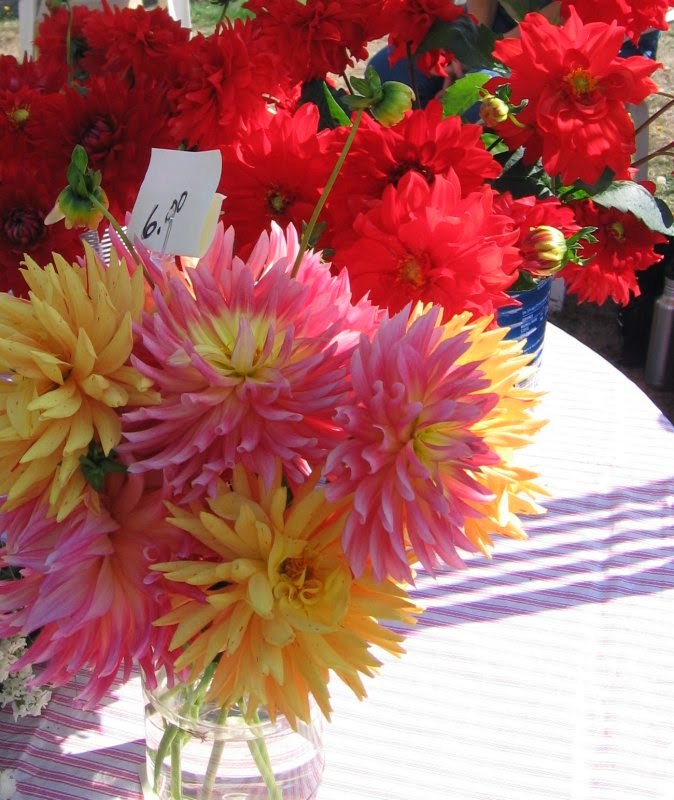 There are flowers from nurseries, farms, and home gardens for sale.

The international students from Pearson College of the Pacific are there in their traditional costumes. Some of them are very exotic and some are jeans and tee shirts. The choir performs, various dancers dance, and individual musicians perform.

Throughout the day there is other entertainment on the stage as well. 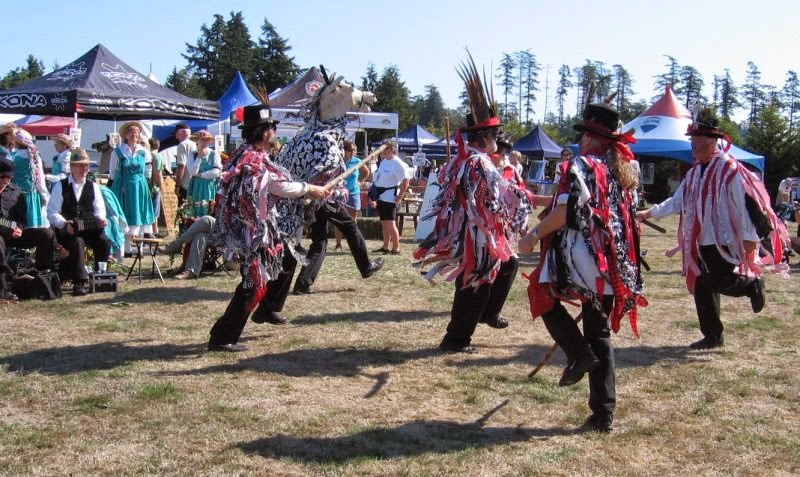 The Morris Dancers perform both the men and the women.

This is the Midway. It costs 25 cents for a trip once around the perimeter of the fair. There are two tractors that run all day long never stopping and each ride is always full. 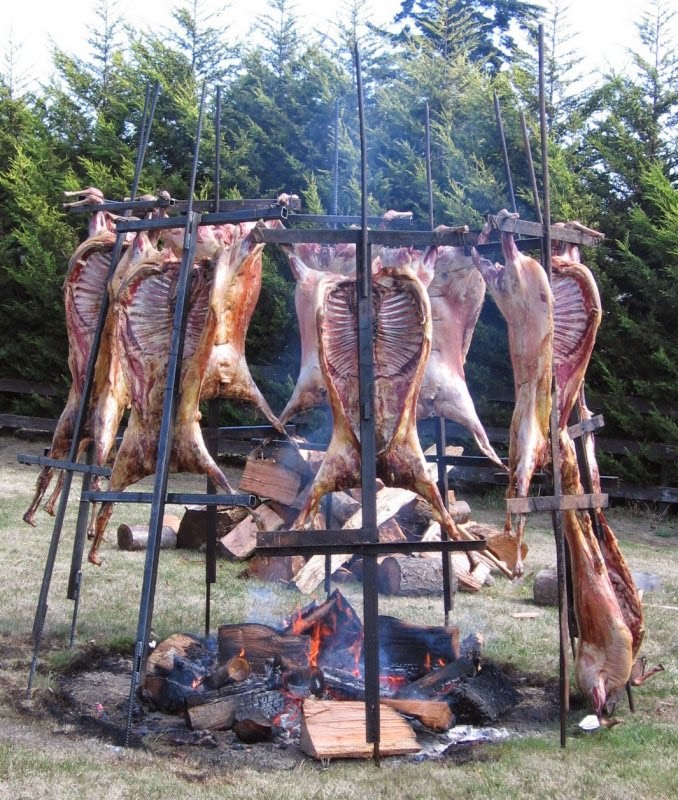 The lamb is roasting all day getting ready for the dinner that can be purchased in advance for about $15.00 a person. Closer to dinnertime the salmon is cooked for those that prefer salmon.

One year we stayed for the dinner and it was delicious. All of the cakes and pies from the baking contest are used for dessert. 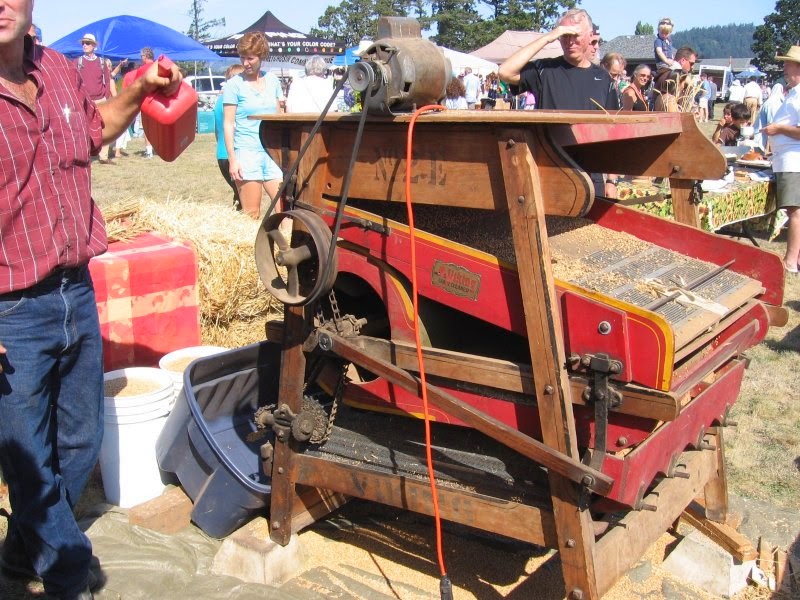 Sea Bluff Farm was at the fair demonstrating an old winnowing machine. I may have the name of the machine wrong but what it did was separate the wheat from the chaff. 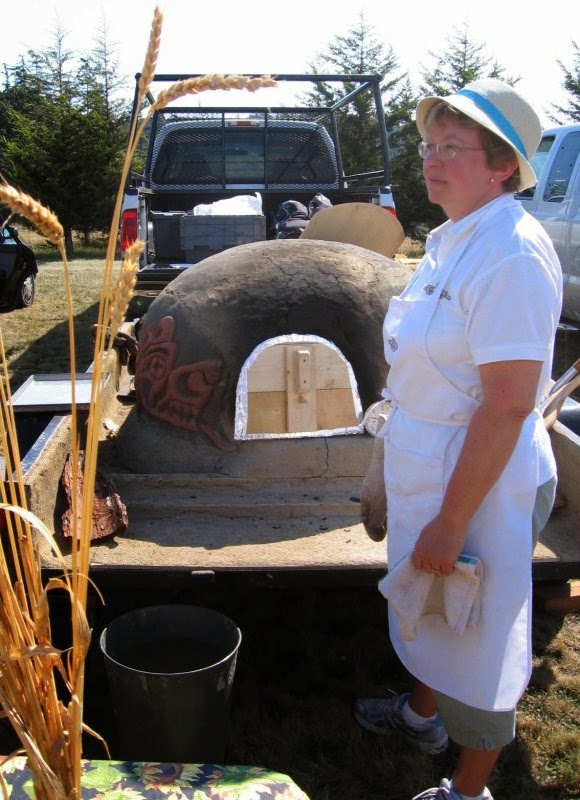 Royal Bay Bakery was there demonstrating a Cobb oven and handing out free samples; a 2" scone made from organic wheat. We had a scone each that was flavoured with fresh fennel seed I think and it was delicious. Later after our tour of the stalls we went back and had a second sample blackberry this time and just as delicious.

There are breads, cakes, pies, and very large cookies for sale.

Highland Jams had a large variety of jams and jellies for sale to go with those hearty breads. 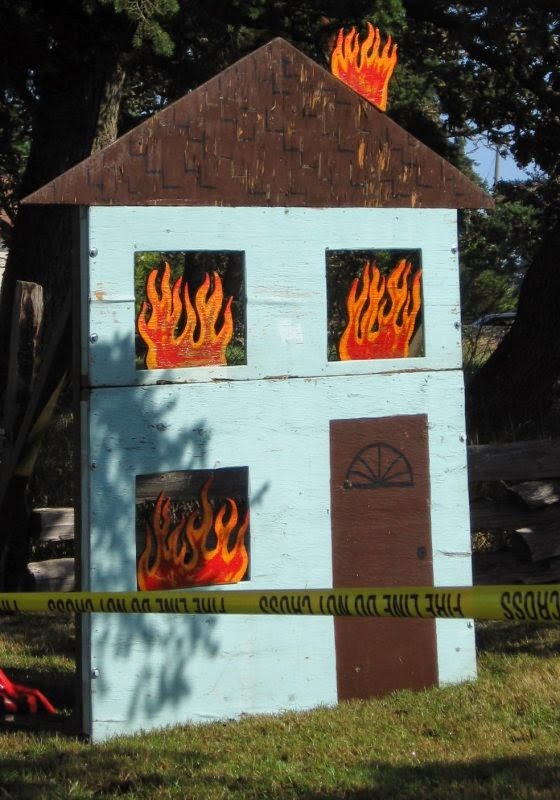 The Metchosin Volunteer Fire Department always has a "training course" for kids. The kids have to carry a small section of hose a small distance and "rescue" a dummy. After that they get to hold the fire hose, the fireman in behind holding it with them and then "put out the flames" of the burning house. The water knocks down the flames and the fire is out. I wonder how many kids grow up and want to be a fireman?

We have never come across a country fair similar to Metchosin Days. It is very relaxed with a very distinct sense of community.

I mention the J-O-Lity Fair quite often when I talk about the Hallowe'en ornaments, noisemakers and figures. You can see that the Metchosin Days fair has been a major inspiration for the J-O-Lity Fair. As time goes by and more items are made the J-O-Lity (Jack-O-Lantern) Fair becomes much more concrete and real. It is already very real for me, I hope that it is becoming more real for you. 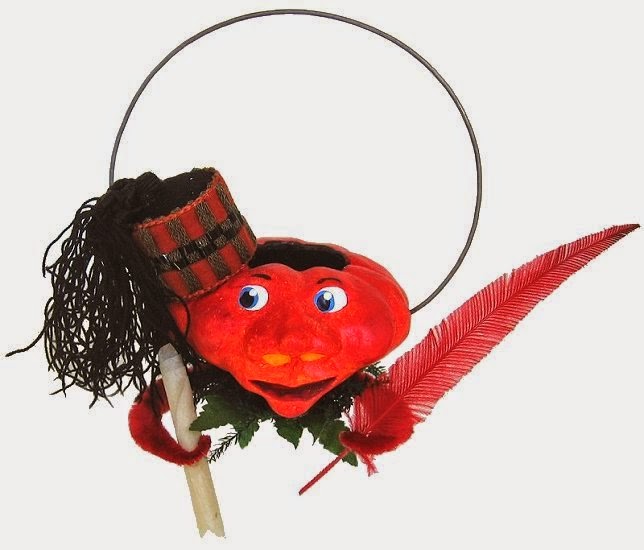 At the end of the fair is the J-O-Lity Fair Costume Ball. Pierre, pictured here, has arrived at the ball dressed as a Persian Scribe. He is up for sale on ebay right now. Click here to go to his page on ebay.
Posted by Len at 11:05:00 AM

Loved the tour of the fair Len - but where was the cotton candy? candy apples?? - I guess I would just have to eat the jam with a spoon to satisfy my sweet tooth

I'm not sure if I saw any cotton candy but there were candy apples though. I'm sure there was cotton candy. As you could see from the pictures this is not like a big county fair it is very laid back. There are no big flashy food booths. I have a feeling that Metchosin is one of the last hippy bastions. Back to the earth and eat tofu!