In my last post I mentioned the annual flea market in Rorschach, Switzerland. We arrived there in the early afternoon. Rorschach is a lakeside town. It shares the Bodensee, see means lake, with Austria, Germany, and obviously the rest of Switzerland that rests on its shoreline. 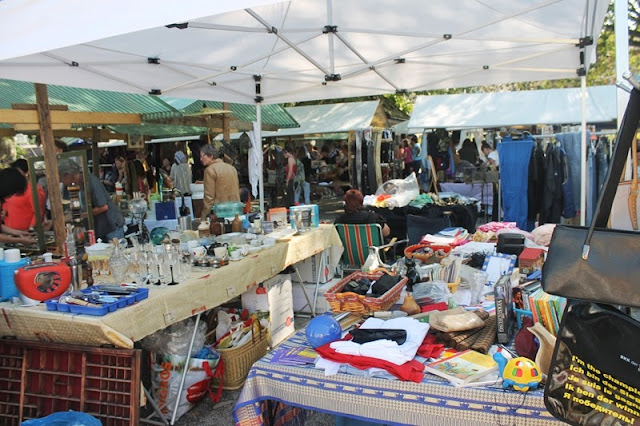 The market is part garage sale and part antique/vintage market. I was in heaven. 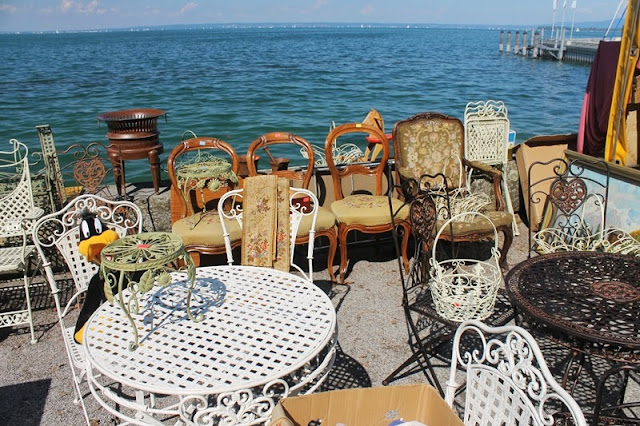 This dealer had lots of patio furniture. It looked to be fairly new but he did have vintage pieces as well. Germany is in the background. 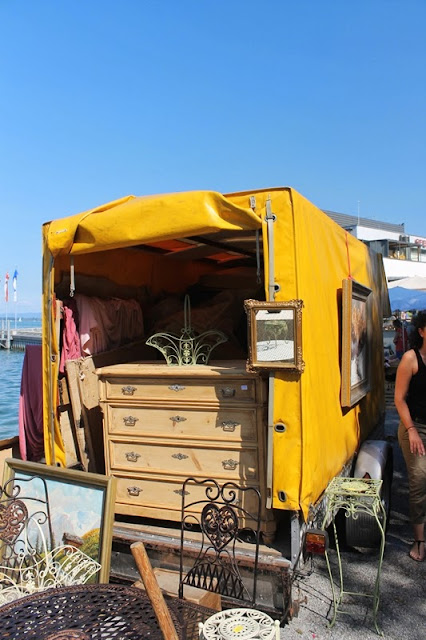 Here is another look at his booth. I love that yellow van. 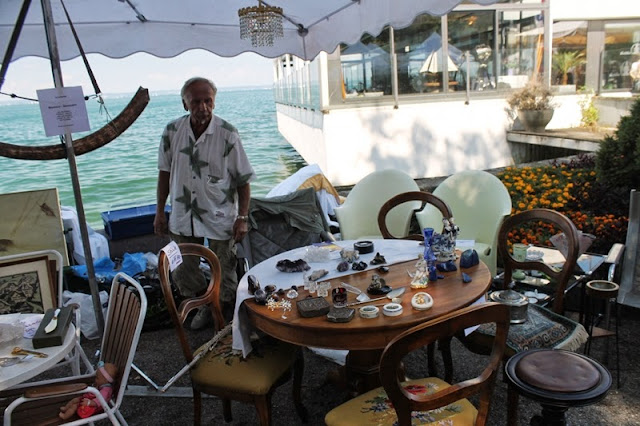 I think this may be the fellow that owned the yellow van, but I am not certain. He was very friendly and was interested to know that I was from Canada. 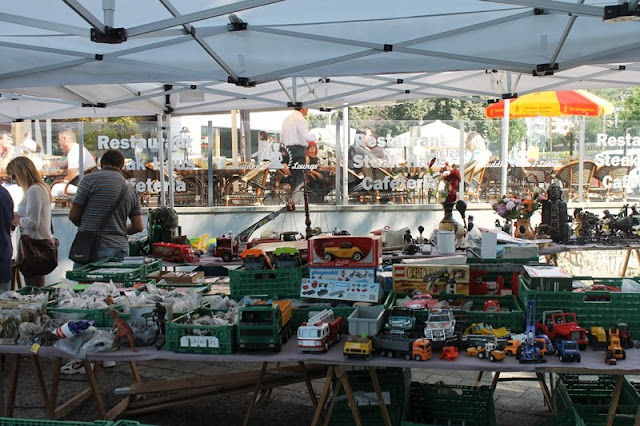 There were lots of vintage toys to be had.

On the other side of the restaurant in the background was an ice cream stand. I bought 2 scoops of the most amazing ice cream in a waffle cone. One was chestnut and meringue, the other I think was mocha. The scoops were about 3" across. The cone cost me 8 Swiss francs, which is about $8.75 Canadian. Ice cream in Switzerland is not inexpensive but it is better than anything that I have had in Canada! 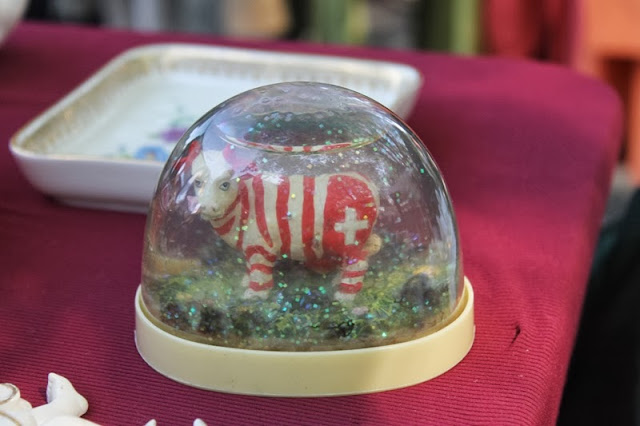 I had to photograph this snow globe. It is so silly. I have seen life size fibreglass cows around Switzerland, each with a unique paint job. 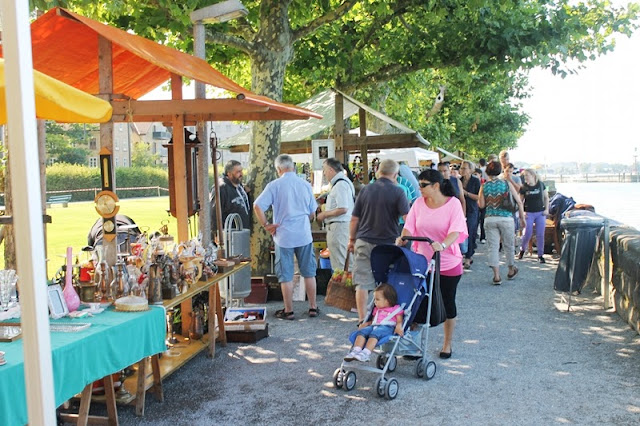 By now I had totally lost everyone else and just decided to not worry about it and just nose about on my own. 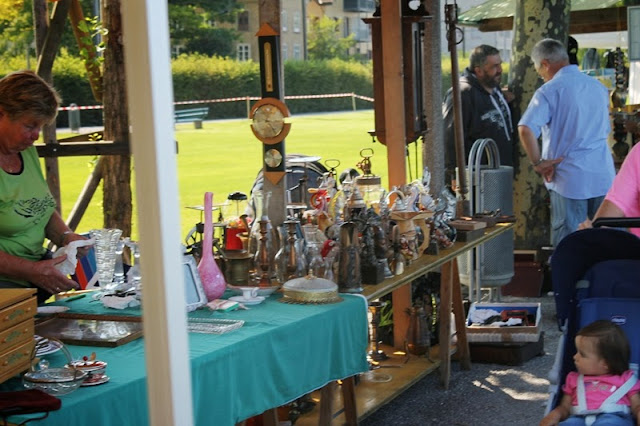 There was lots to look at. Most of the stuff I wasn't interested in. I did have my luggage to think about though when deciding to purchase anything. 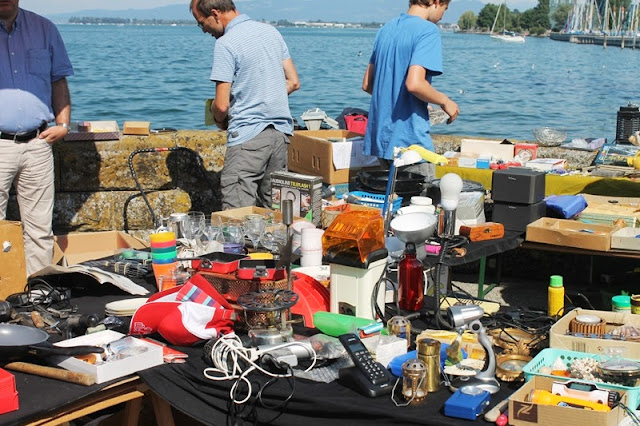 Like I mentioned before it was a mix of vintage and antique dealers and garage sale merchandise. 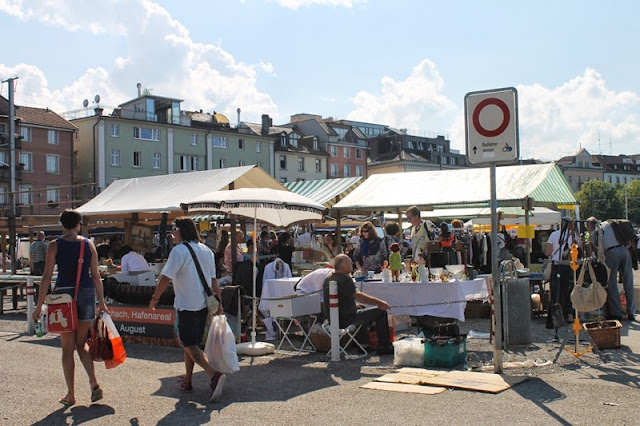 And now we are at the end. It doesn't look to be that big but it took several hours to walk the length of the market. There were many areas that were adjacent to the walkway that had a dozen or more dealers in a group. I did have to take into account the price of items I was interested in, the cost would have been too high once taking in the exchange rate.

Well, I had better get on to listing more merchandise for my Etsy shop. I have more pictures of our Swiss trip to share with you, there was inspiration all around us.
Posted by Len at 12:47:00 PM