This is the last post showing the decorations that were up for Christmas last December. 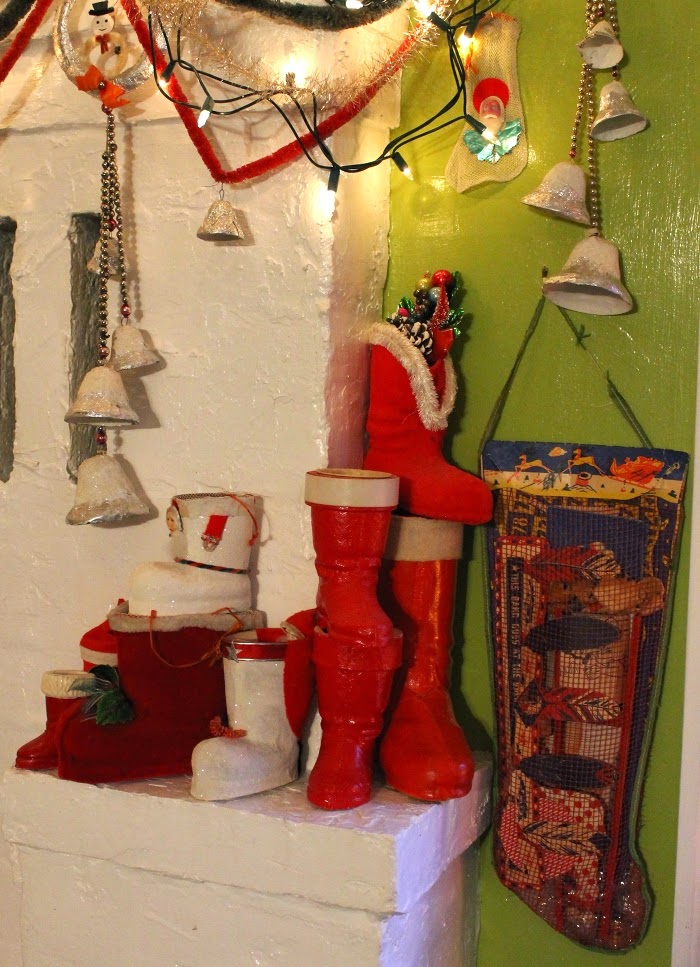 The small net stocking was used for one our two cats when we were kids, the other stocking has gone missing. My dad was a butcher, he would bring home a kidney for each cat that my mum would wrap in wax paper and then place one kidney in each stocking. They enjoyed the kidneys immensely! 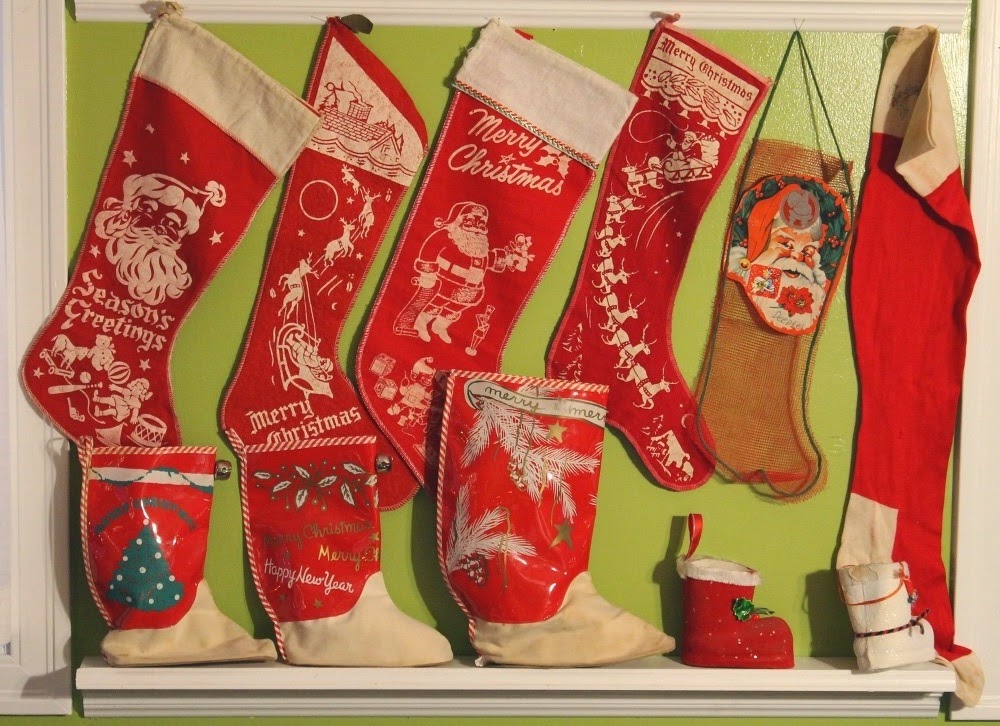 We have some ledges that I put up, don't get me on the topic of really bad builder decisions with three stupid skinny windows about three feet apart and not relating to each other or anything else for that matter... my apologies for that diversion.

As I was saying, I put up some ledges between three windows that usually have platters on them but with the party only days away and the number of people that would be in our small home I took the bottom platters down to avert any mishaps and put up the rest of the Christmas stockings and boots plus two old candy tins. 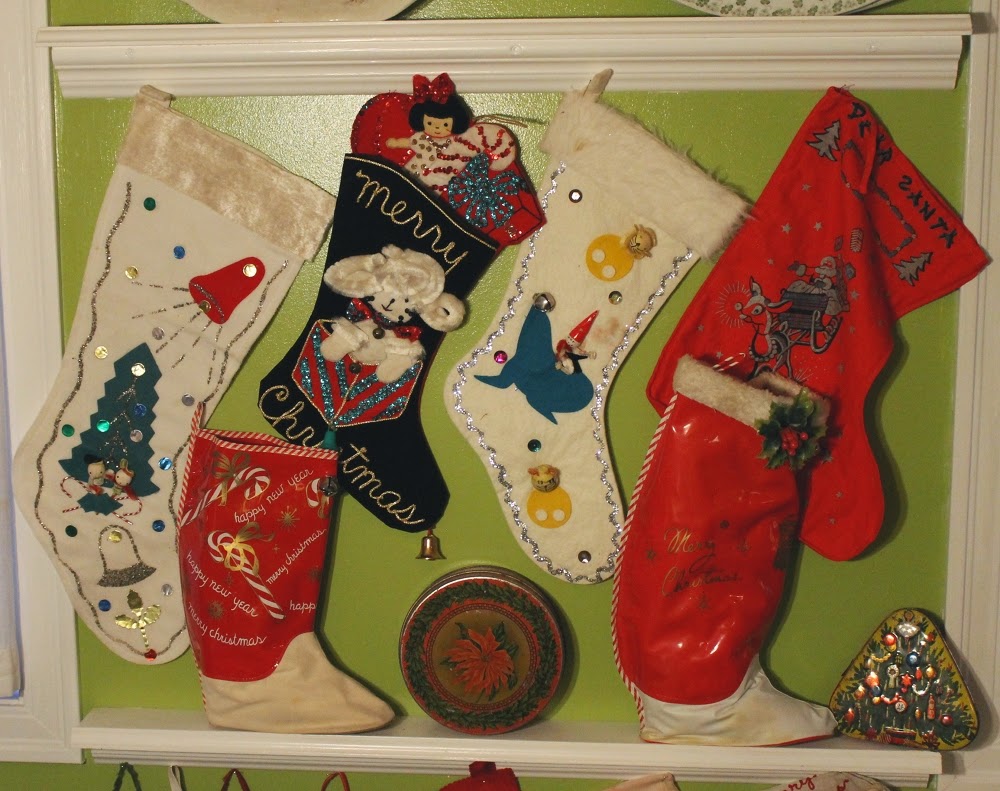 The triangular tin is British and held toffees. The tree on the tin is topped with a Christmas Fairy not an angel. The black stocking is my wife's favourite.

The red felt stocking between the clear plastic stocking and the one marked "Diana" is handmade with felt cutouts embroidered to the stocking, all accented with hand-sewn beads and sequins. The eyes on the lambs and teddy are a sequin at the base with a bugle/tube shaped bead and a seed bead at the end of the bugle bead. It looks quite odd, almost like the eyes of a slug, each eyeball on a stem. That is my favourite stocking, among many favourites. 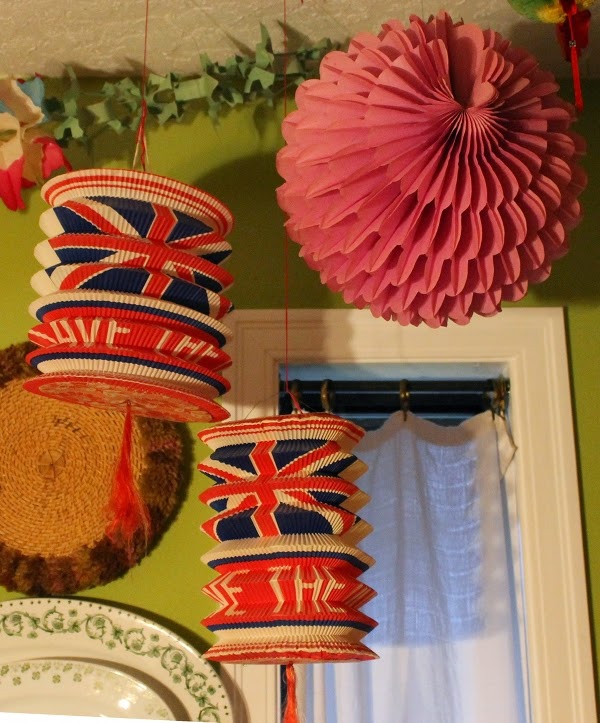 "GOD SAVE THE QUEEN" two British paper lanterns, probably to celebrate the crowning of Princess Elizabeth on February 6, 1952. 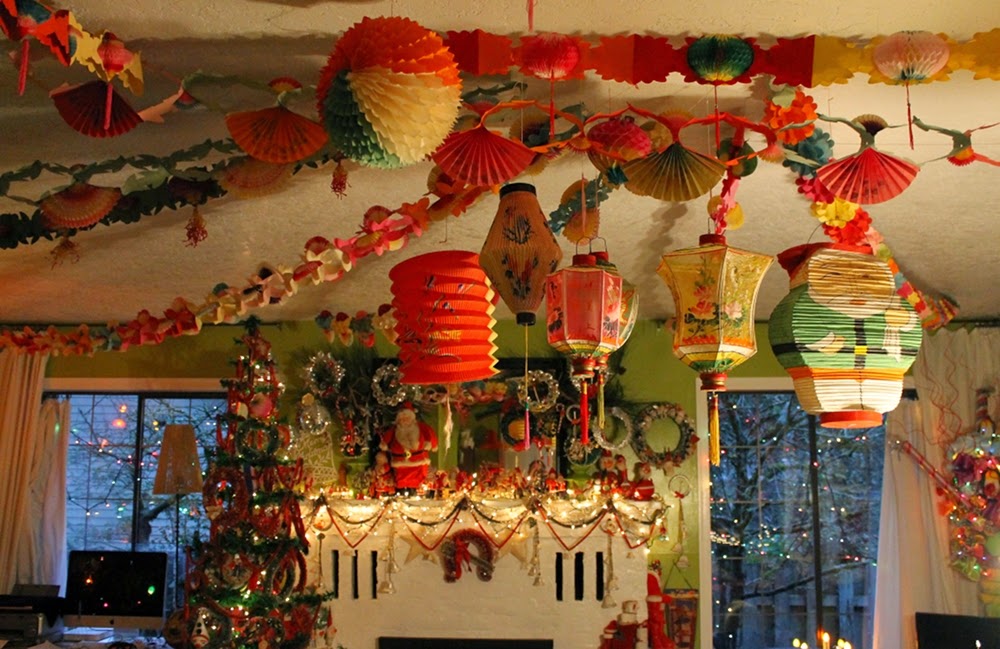 Looking from the dining room into the living room. All of this down now; we only keep it up for about a month. I look forward to seeing it each year and I look forward to taking it down. The emptiness is refreshing and then on to the next holiday or bit of decorating. 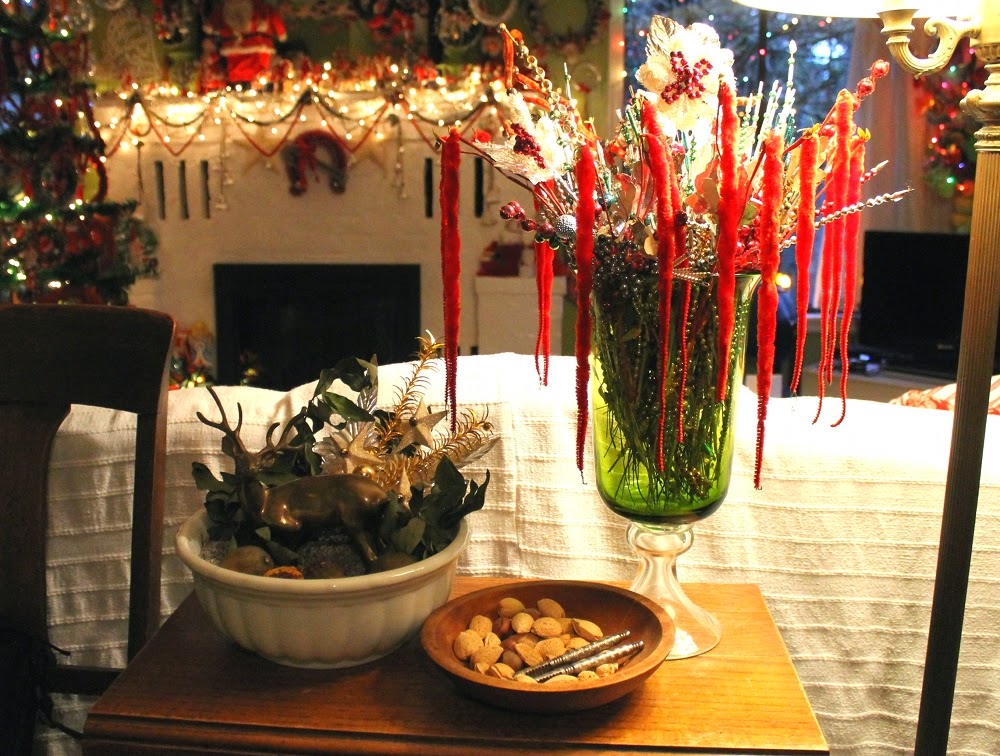 I plunk all of my glass spikes into this green vase. One year I did feature them on the mantle. It was nice to see individual clusters of each style, have a look at that display here.

The spike in behind the brass deer is quite fantastic. It is one stem with three wires wrapped in gold plastic resembling fir branches each tipped with a gold glass bead. At the base of the gold stems are three cardboard three dimensional stars covered with white sand each with a gold glass bead in the centre of each star. All of the individual items are wired together and wrapped with silver foil covered paper. This spike is quite large as you can see.

I never know what I will be putting in our front door urn. If I can remember this was done the day before the party so time was of the essence. I gathered greenery from the garden to fill out the greenery that had been kindly given to me from a friend of my daughters that I had not seen in about twenty years.

When it was finished it looked so stuffy and ordinary that I decided to add the word balloons to lighten the mood.

I haven't done any displays in the hallway for a few years, it can be too tempting for a small child. Have a look at two other hallway displays that I did for Christmas here and here. This year I wanted some light in the hallway without turning the overhead lights on, all done on the wall in a small area.

This carpet was going to be used under the large feather tree but was too big so I used a smaller version of the same image under the tree. I grabbed the gold frame from the garage, a green metallic garland, some other greenery, two strands of mini-lights and a short section of bullion fringe that I made several years ago for a window display. It is not one of the best displays but it did the job of adding some light as well as a bit of festive greeting.