An Update and "A Little Tour of My Brain, Part 7 – The Circus"

My studio has been turned into a bedroom of sorts. When I go in to try to get something to work on or to find something it is a little frustrating. I would rather be frustrated though and see our wonderful daughter and her future husband; he is a great guy. She has the studio/bedroom and he has a tent outside! We have a small home.


I will be listing stuff on ebay. It has been about 6 years since I have used ebay so I am checking to see what has changed. I also don't want to miss spending time with our guests so I will post when the items are up. In the meantime here is another brain tour.

I love the imagery of the circus. The following five images are from a vintage board game that I have hanging in my studio. 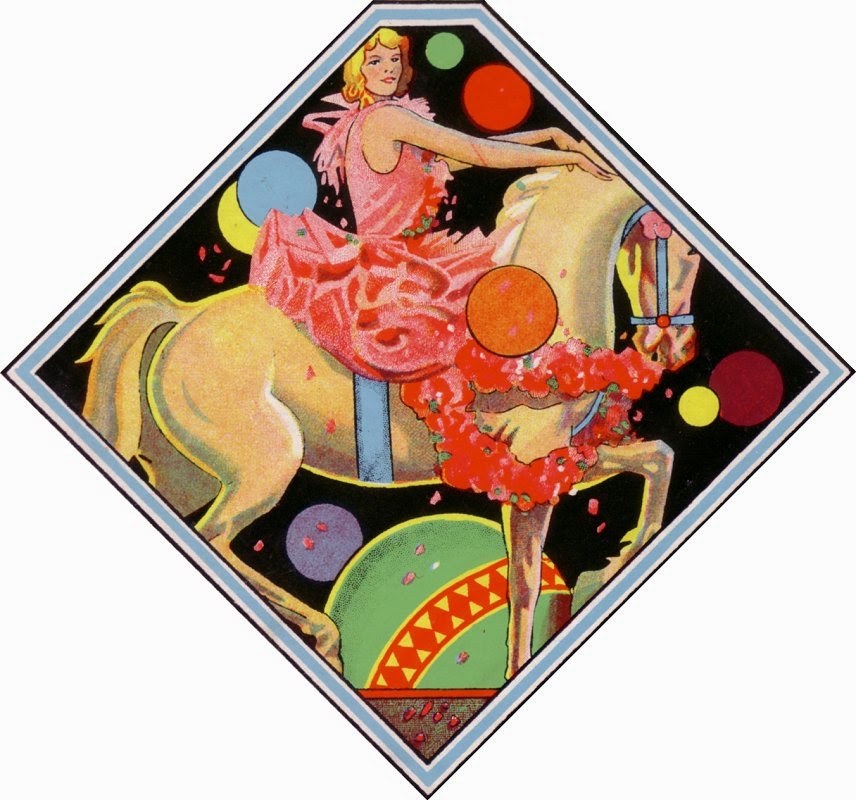 The costumes and the colour are what make them so appealing to me. The woman sitting sidesaddle on her horse dressed in a pink ruffled tutu inspired dress with floral horse harnesses is ultra feminine. 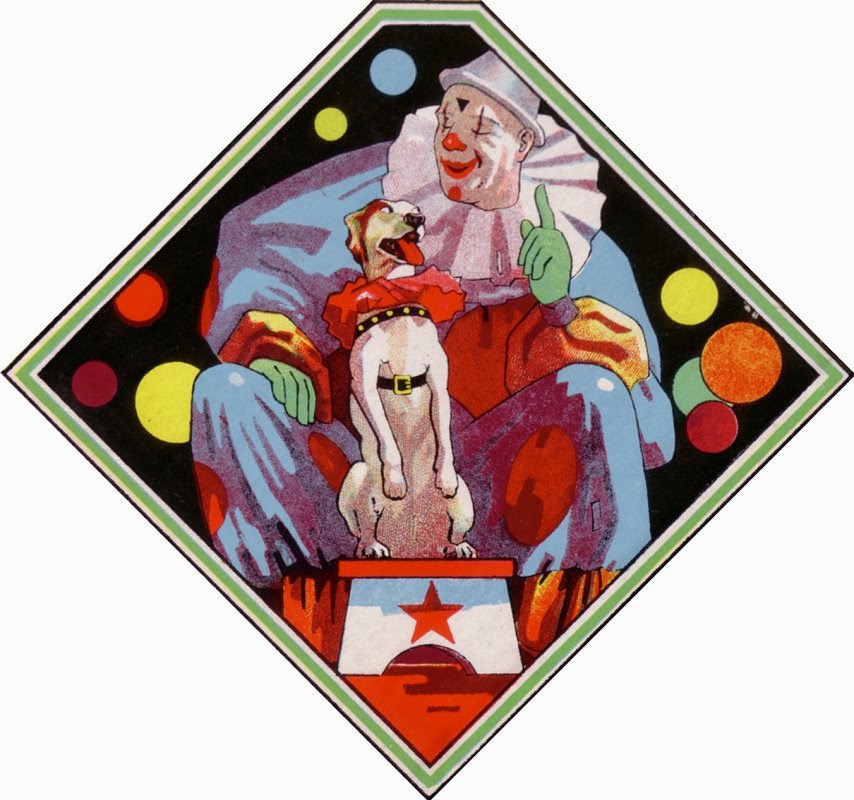 When I was a child I found clowns very scary. The clowns that I prefer are the European ones but I do like this clown image it is quite lovely. 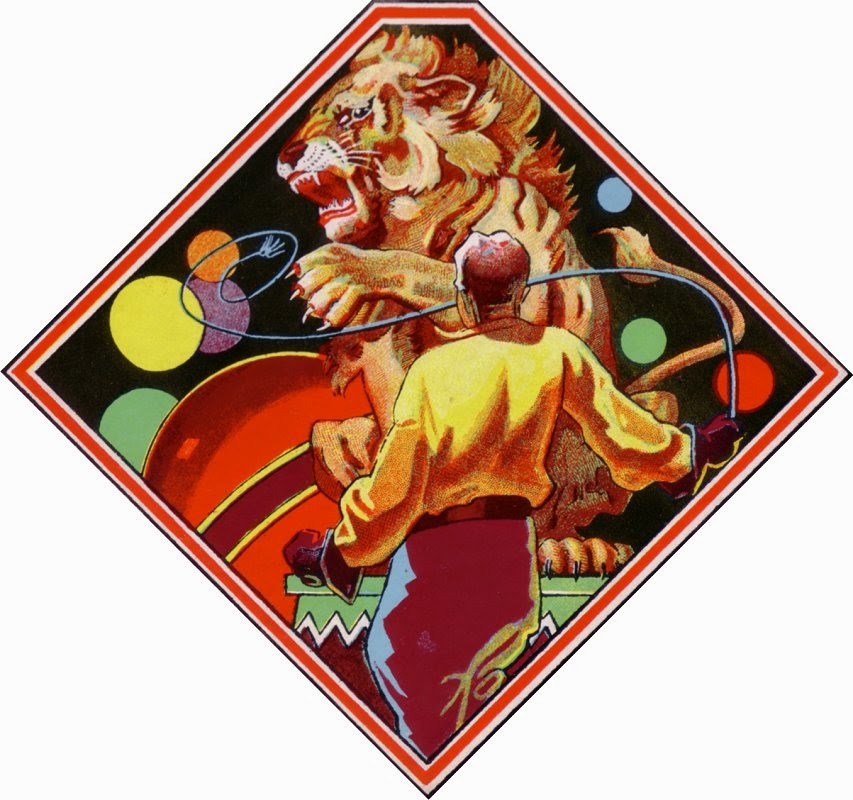 Everything in the circus is larger than life and this illustration of the uber - masculine man taming the wild and ferocious lion - "King of the Jungle" is proof. Who wants to see what we see in everyday life? I do not generally like animal acts. Cirque du Soleil has proven that animal acts are not important to have a truly marvelous circus. 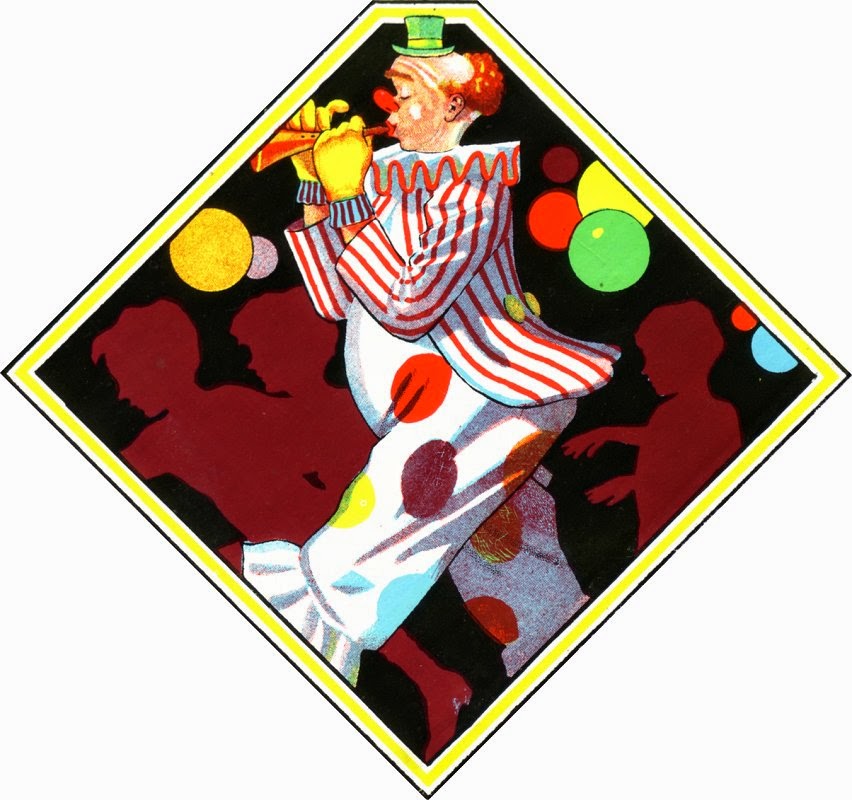 Here is another colourful image of a clown. I wonder if the child behind the first two is a little uncertain about the safety of this strange character. 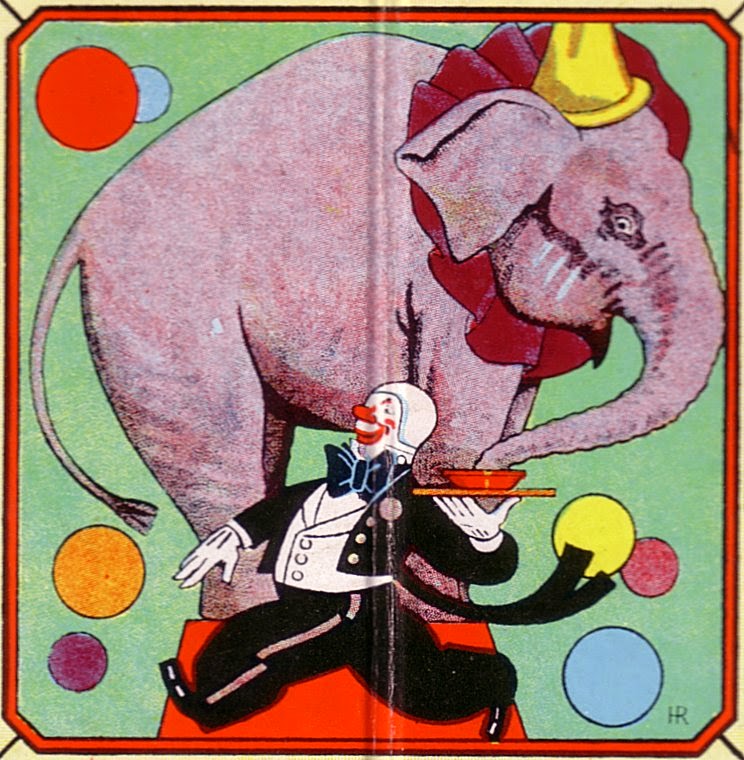 Elephants and clowns clearly say circus. All of these images are signed "HR", unusual for a board game. 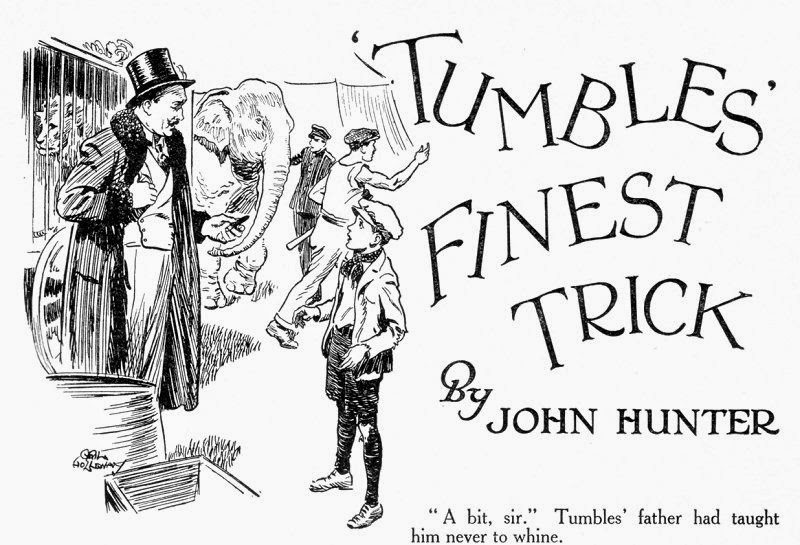 This illustration is from a 1930's "Pip and Squeak Annual" that belonged to my Dad. Pip and Squeak was a popular comic strip in British newspapers. 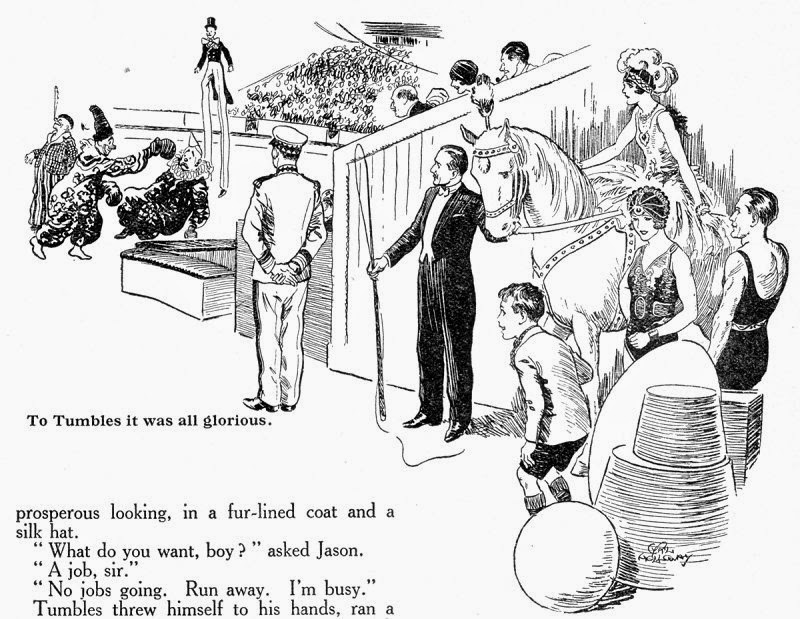 Tumbles is the young fellow in shorts and true to all English children's stories, including the "Harry Potter" books, he saves the day.

The following four pictures are from an October 1931 edition of "The National Geographic Magazine". They show a much more realistic view of the circus. 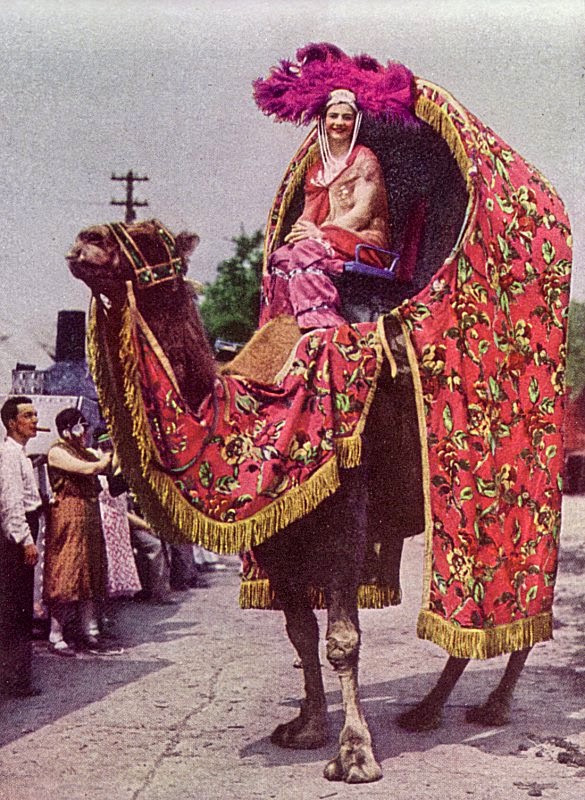 The ladies costume and the draperies on the camel all speak of exotic far off places. The costumes add to the excitement but even if they didn't have them most people hadn't seen a camel. 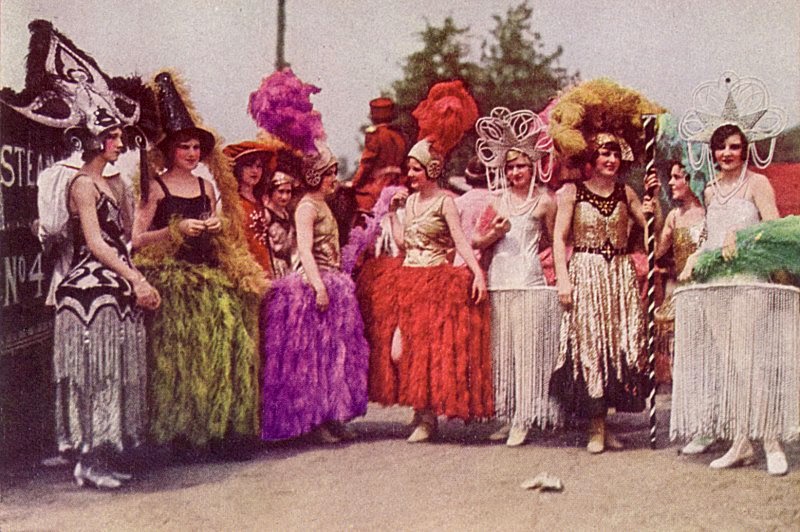 These young ladies are wearing an assortment of costumes worn in the circus parade. 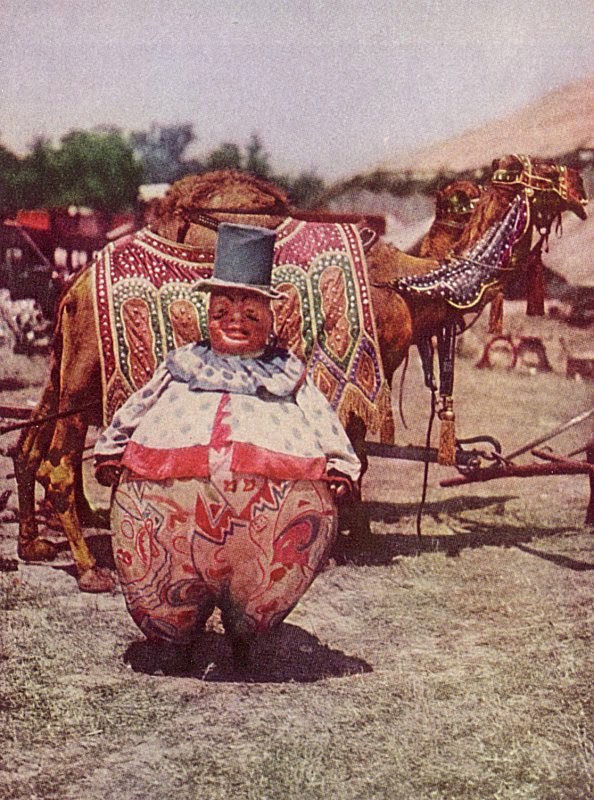 North American clowns for the most part have always appeared to me as sad, this fellow included. The pattern on his trousers is very interesting. 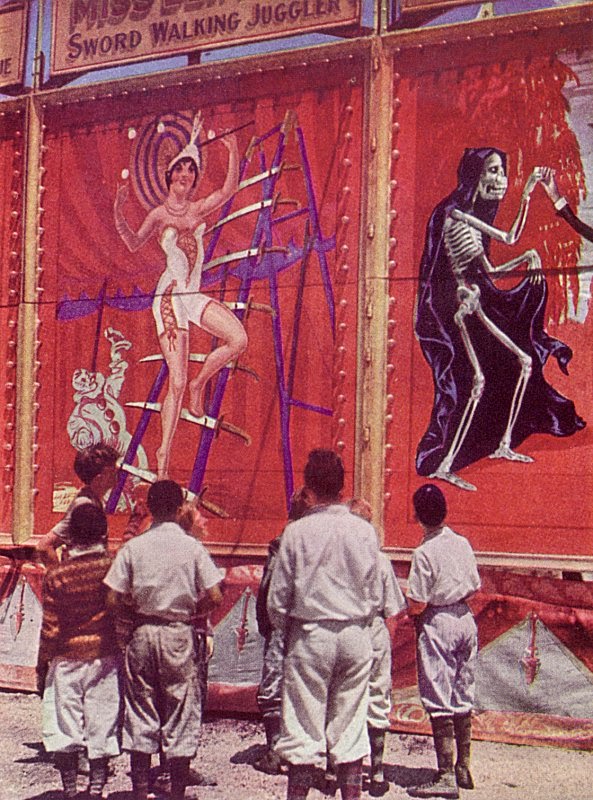 In the old circuses they had a sideshow. The actual exhibits were always less than "The Greatest Show on Earth".

In Europe and in Quebec circus has a long and respected tradition. When we were in Switzerland I picked up two flyers advertising the circus that was coming to town. This flyer is for the "Circus Knok". 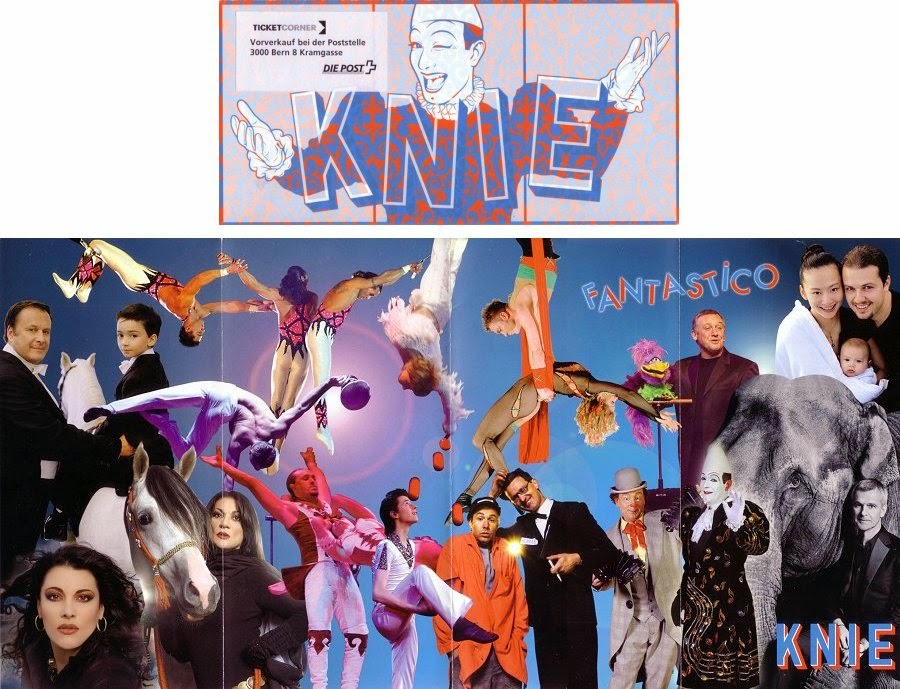 This flyer is for the "Circus Knie". If you look at the brochure you will see the clown that I like the best. He generally has a conical hat with a rounded top. His costume is covered in spangles. The costumes are really beautiful.
Posted by Len at 8:31:00 PM

Hey Len,
thanks for sharing such great imagery.